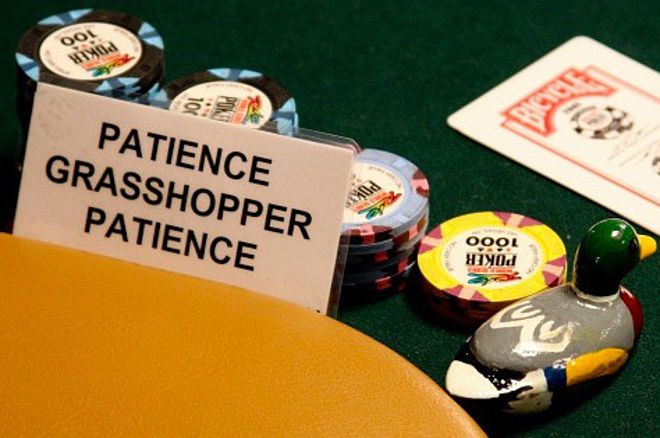 I wanted to be a rock. In the '80s and '90s, to be called a rock was the highest achievement in poker. I craved that badge of honor, and the promised riches. A rock was a solid player, imperturbable, aggressive, fearless, and above all... tight.

I'd been playing loosey-goosey poker for 10 years in low-stakes home games before I even learned what a rock was. I didn't know I was a loose player because I'd never met a tight one. And then, when I finally saw tightness in action in Vegas, and I started reading about it in poker books, I felt like I had found a million dollars.

Several years later, my tightness was tight enough to earn a living. And after that, I did make a million dollars playing poker, grinding mid-stakes live cash games for 20 years. I made all that money, week after month after year, even though I never played as tight as I thought I should. Not for more than a couple hours at a time. Which meant I could have made tens of thousands more dollars per year, every year. And that fact bugged the shit out of me, year after disappointing year.

While that was going on, the games kept getting tougher, and by that I mean tighter. And I kept getting tighter too, right alongside the improving world, such that my earn rate stayed the same.

That takes us up to ten years ago, in 2009, when I began an experiment based on this somewhat silly question:

What's the tightest I could play at NLHE and still earn the 10 BB per hour I'd been making all along?

For example, if I folded 99 percent of my hands before the flop, no amount of talent and spidey sense could turn a profit. Same with 98 percent, and 97 percent, and so on, until…?

The answer landed on me like a big fat duh. I could and should play exactly as tight as I did during the hours when I thought I was playing tight enough, and then never vary from that, like, ever. No more gaps in consistency, no more preflop leakage, whatsoever, as defined by me.

And here are three reasons why:

1. To prove to myself I could do it

I am competitive, but only internally. Playing poker is like going golfing by myself. I plop a shot into the pond. I chip one in from the fringe. None of it matters because there's no one else there. I can beat myself up over bad shots, or not. I prefer not.

I take the same approach at poker. I'm always trying to play a little better than before, but if I don't, that's okay. And because I'm only competing against myself, I can invent challenges, at poker, and at golf.

Maybe I'll play the next hole using nothing but a 5-iron for every shot. Or maybe I'll putt with my eyes closed. One time I took on a huge challenge. I went golfing by myself and for some crazy reason I decided to carry my golf bag (instead of renting a cart as usual). It was a hilly course. I went home after six holes.

At poker, the ultimate challenge would be to play perfectly leaklessly forever. It'd be like a climber taking on Everest, or a swimmer crossing the Channel, or a sleep-deprived golfer lugging a floppy 35-pound bag around while enduring slopes and sunlight. Even if one doesn't climb the mountain or survive nine holes, there is honor in the attempt.

2. To never again feel the pain of leaking

What does it mean to play leakless poker? To me, it means following my own rules. Before I could honestly and accurately evaluate my leaks, I would have to set bars for specific starting hands in specific situations, and say that if I played any hands worse than the bars I had set, then that was a leak.

What I'm talking about here is exterminating my small leaks, the gray-area leaks, the ones that creep up and add up. Having well-defined leaks is a prerequisite for leaklessness.

Leaking had become more painful than losing. Painlessness would require leaklessness, so in the quest for painless, I had no choice but to aim for leakless.

3. To prep for dotage

When I took the vow, I was 50 years old, and my cogs were already showing signs of slippage. To ride off into the poker sunset — to have an edge in every game forever — I would need my game to be simple, solid, and spunky. That was my best shot at remaining profitable.

So in 2009, I took a shot at terminal tightness. And I managed to climb the first foothill. I went to Vegas and I played poker for five days, eight hours a day, and I won the internal competition against myself. I did not leak once before the flop, and it wasn't even that hard to do, because I'd been working up to it my whole life.

Now it's 2019, and so far so good. I haven't been a perfect rock these last ten years, but pretty damned close.

But what of creativity? And flair? If you only play certain ranges in certain situations, then where is the cunning? And daring? And outmaneuvering your opponents?

All of that fun stuff is and ever shall be central to my game. I'm a gunslinger. It's just that now I don't shoot as often. The strength of my starting hands, on average, is at an all-time high, as is the percentage of streets on which I act last. Because my bullets are optimally profitable, I don't need to fire as many.

During most of my long relationship with tightness, we were just holding hands. Now it's a full embrace. And I must say, it was worth the wait, and the work.

World-class coach and author Tommy Angelo is now offering poker pain relief to everyone. You can schedule a call to talk to Tommy about bad betting, bad quitting, bad tempers, or whatever else is hurting your game. Just go to tommyangelo.com. Angelo's first book, Elements of Poker, was called "the seminal poker text of the 21st century" by The London Times, and it has revolutionized the way serious players approach the game.