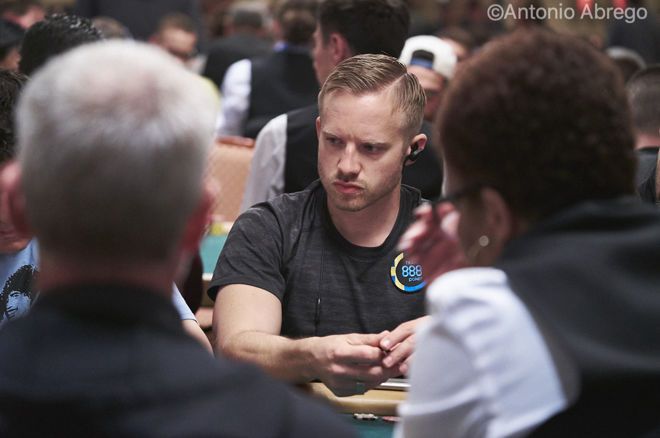 When you flop two pair deep in a Main Event, you're generally going to be eager to get your chips in the middle. But sometimes what happens thereafter lessens that eagerness, and a couple of streets later you find yourself contemplating making a big fold.

Such was the situation faced by 2014 World Series of Poker Main Event champion Martin Jacobson not long ago near the end of the 888poker LIVE Barcelona Festival Main Event.

As Jacobson explains below, there were 12 players left from the 551-entry starting field, playing at two six-handed tables. Ricardo Pinto had the big stack at the table and after he raised from under the gun Cornelis de Jong called from late position and Jacobson called as well from the big blind with

The flop then came

giving Jacobson two pair, and he checked. Pinto checked as well, then de Jong bet 135,000 and both Jacobson and Pinto called.

Jacobson takes a detour in his analysis here to explain how he had seen Pinto and de Jong play a curious hand from a little before in which de Jong had repeatedly bet exactly 135,000 with what turned out to be a medium-strength though vulnerable hand.

With all three still in, the turn was an offsuit three and it checked to de Jong who again bet 135,000. Jacobson says he contemplated raising, but versus two opponents de Jong was representing something strong and so he just called. Pinto just called again, too.

The river Jacobson remembers as an offsuit six, meaning there were still just the three spades on the board and with his two pair he checked again. This time Pinto woke up with an all-in shove and de Jong folded. Jacobson thought a long while, using two time extensions, but ended up folding his hand as well.

"I'm trying to come up with bluffs he could have that he would play this way given the action," explains Jacobson. "And also what value hands he would do this with."

Ultimately Jacobson decided Pinto's move was a reaction to de Jong's proclivity to make "small bets with marginal holdings," and that after slow playing something strong he was going for big value. Take a look:

As the live stream revealed, Jacobson had thought correctly. Pinto had

, having flopped the nut flush, while de Jong had been taking those small stabs with

Interactive Map: Where to Play the Best Slots in Vegas

Playing a Big Draw on the Turn vs. Two Opponents