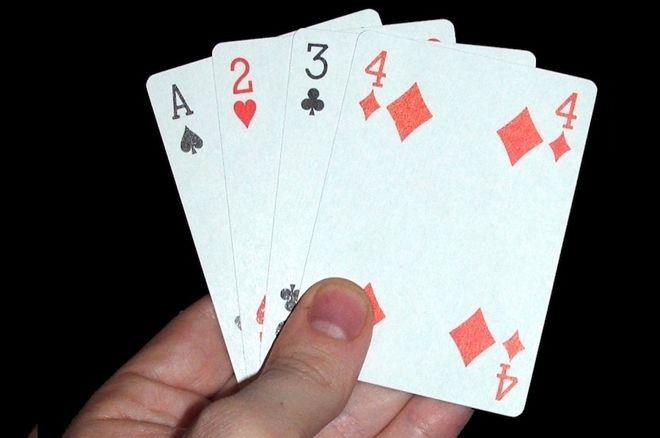 Ed. note: The 2018 World Series of Poker is fast approaching. In order to get ready, over the next few weeks we're again sharing author Ken Lo's strategy advice for games other than no-limit hold'em.

In this series, I am discussing some of the poker variants other than no-limit hold'em you'll probably hear about during coverage of this year's World Series of Poker. If a game piques your interest, think about taking some time to explore it further. Who knows — you just might find a new game to love!

Badugi was a recent addition to the WSOP schedule, first appearing as part of 10-game mixed events. This year Badugi is one of the three variants played in the "Mixed Triple Draw Lowball" event. It's also one of the games available in the two "Dealers Choice" events.

In this article, I briefly discuss some basic tips and strategies for Badugi. Despite this game being relatively new to the tournament scene at large, its popularity has steadily been growing. Not only is it a core component of the 10-game mix, certain aspects of the game are reflected in other contemporary mixed game variants such as Badeucy, Badacey, and Razzdugi. In fact, Badugi, Badeucy, and Badacey will all be played in the upcoming Dealers Choice events at the WSOP.

Badugi is a type of draw game, and more specifically, a variant of triple draw. Accordingly, you will find that the manner in which hands are played shares many similarities with a game like 2-7 triple draw, for which we have previously discussed some basic strategy.

Badugi also resembles 2-7 triple draw in that players are trying to make the lowest possible hand at showdown. The key difference, however, is that Badugi utilizes its own, unique hand ranking system, one bearing little resemblance to standard poker rankings. Some no-limit hold'em players find adapting to the use of this new hand ranking system to be a formidable challenge.

The object of Badugi is deceptively simple — you want to make the lowest four-card hand possible without any cards being duplicated in either suit or rank. Unlike games that use "deuce-to-seven" hand rankings, the

in Badugi always plays as a low, desirable card. Therefore, the best hand in Badugi is

rainbow (i.e., all cards being of different suits), such as the hand pictured up top.

Any four-card rainbow hand with cards of unique rank is known as a "badugi," the hand named after the game itself. If at showdown both you and your opponents hold badugis, the player with the lowest-ranked badugi wins. Recall from our previous articles that in lowball games, the highest-ranked cards of a hand determine the hand's rank. By way of illustration, consider the following hands ranked from best to worst:

What happens when your four cards do not form a badugi? Whenever your hand includes cards of duplicate rank or suit, you will not have a badugi and can only form an incomplete hand. Consider the following examples:

All incomplete hands are inferior to badugis. That is, any badugi --even the worst one (

Three-card incomplete hands are so common, they are given a special name — "tris" (pronounced "tries"). Tris are ranked in the same way as badugis, in that the highest-ranked cards determine the final rank of a tri. For example, a 3-high tri such as

In broad terms, 7-high or better badugis are very strong whereas medium-strength badugis typically range between 8-high and J-high. With this said, in order to succeed in this game you must embrace one fundamental truth: it is difficult to make strong badugis, due to the game's unique suit restrictions.

First, know that you are unlikely to be dealt a strong badugi from the outset. Only about 6 percent of all dealt hands are badugis, and roughly half of these are very weak (Q-high or K-high). Poor badugis are highly vulnerable to being overtaken when facing multiple drawing opponents.

Second, when you start with a tri it is not easy to improve a badugi, especially a strong one. Suppose you hold

, the best tri. Observe that in order to improve to a 7-high or better badugi, you cannot draw just any card from four to seven — you must draw a diamond. Thus there are only four cards in the entire deck you can potentially draw to make a very strong badugi. Even with three draws, this is difficult to do.

This means strong tris are very valuable hands. When considering potential starting hands, you want to be holding a strong tri from the outset as often as possible, with the intention of drawing to a strong badugi. At the very least, you want to start with a hand that can improve to a strong tri quickly.

Remember, if no one makes a badugi, the best tri will win. You want to be the player holding the best tri when everyone fails to make a badugi.

It follows that a tri such as

is significantly inferior to

as a starting hand. Even though both hands are only one card away from a badugi, the second hand can improve to a much stronger three-card hand on any given draw, and that improved tri may be sufficient to win the pot if everyone fails to make a badugi.

In fact, as more draws are exhausted, the best tri becomes an even greater favorite to win when all players have yet to make a badugi. Accordingly, if you expect to hold the best tri and no one appears to hold a badugi, you should bet to make your opponents pay to draw.

Conversely, if you expect an opponent has already made a badugi (e.g., a player stood pat on the previous draw and is unlikely to be bluffing), and you hold an incomplete hand with only one draw remaining, unless the pot is large and you have an excellent draw it will often be incorrect to call an opponent's bet on the third betting round. Drawing once more will cost you a bet at the high limit, in a situation where it is extremely difficult to draw a needed low card in the perfect suit.

That said, against experienced opponents you will need to be open to the possibility that someone who is representing having drawn a badugi may not actually hold one at all. If you hold what might be a winning tri, you may need to be prepared to call a bet on the final betting round to catch the anticipated bluff.

In this regard, as we noted with respect to 2-7 triple draw, in Badugi there will be situations where "snowing" may be a viable alternative to drawing. If you face opponents who routinely fold on the final betting round whenever they fail to make a badugi — which will be often — a bluff may be in order especially when your tri is unlikely to win a showdown.

By standing pat on the final (or earlier) draw, and betting in order to represent having made a badugi even though you don't hold one, you may be able to take down pots in situations where drawing to a strong hand is likely to be a futile exercise.

Ken Lo is the author of A Poker Player's Guide to Mixed Games: Core Strategies for HORSE, Eight-Game, Ten-Game, and Twelve-Game Mixes, He is based in Toronto, Canada. Follow him via the book's Facebook page and on Twitter @ppgmg.