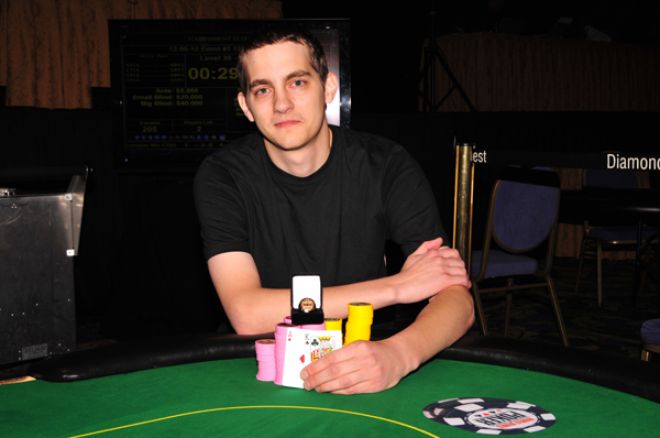 The 2012/2013 World Series of Poker Circuit presented by Southern Comfort 100 Proof Harrah’s Rincon kicked off in a big way this week as 27-year-old Alexandru Masek captured his record-tying fifth gold ring in the very first event, joining Mark “Pegasus” Smith and Kyle Cartwright as the all-time leaders in the WSOP Circuit’s nine-year history.

Masek, originally from St. Louis, Missouri, but now a resident of San Diego, California, navigated a field of 205 players to make the final table of Event #1 $365 No-Limit Hold’em. Interestingly, the winner of the same event the year before, Randy Paguio, joined him there. As fate would have it, the two made it to heads-up play, but Paguio was denied back-to-back titles as the University of San Diego Law School graduate emerged victorious to capture the $15,989 first-place prize.

“I feel really good. I feel like I'm on cloud nine right now,” Masek told WSOP officials shortly after his win. “I feel like I got close quite a few times (to winning the fifth), and that's tournament poker. Now, it's great to finally get number five to come out.”

“When I won before, I don't think back then I realized how hard it is to win,” added Masek, who did an in-depth interview with PokerNews earlier this year. “[The drought of not winning] made me realize just how good I ran when I was winning.”

Shortly after the win, the congratulations poured in from the poker community:

@WSOP My heartfelt congratulationa to my friend Alexandru Masek on his 5th Ring !!!!! JOB WELL DONE!!!!!

PokerNews had the chance to talk to Masek about his win.

Congrats Alex. How does it feel to win you record tying-fifth ring?

It certainly feels really good for several reasons. Since winning the last in Tahoe in 2011, I’ve had some pretty deep runs in WSOP Circuit tournaments without having things go my way at the end and being able to close any of them out. It’s made me realize how tough these things are to win, and I will likely savor this win for longer than usual because of the previous close calls.

Another big reason it felt great was because of the respect I have for the player that I ended up playing heads up against, Randy Paguio. He played extremely well that entire final table, building a short-stack up and then putting well-timed pressure on opponents once he chipped up. He won this same tournament a year ago, and I won it the previous year, so that also created an interesting dynamic at the final table.

Where does it rank among all your rings and why?

It’s tough to rank them, but I’d say it’s certainly up there due to the fact that it’s been a year since I last won a live tournament. I think I won eight live tournaments in 2010/2011 but hadn’t won one yet this year. I’ve made a lot of deep runs in tournaments this year without having things work out at final tables, and this win gives me renewed appreciation for what it takes to win a live tournament. And the fact that it’s the one that ties Mark Smith and Kyle Cartwright for the most all time on the Circuit makes it especially sweet.

What was the reaction of your family, friends, and fellow poker players?

The reaction and support from everyone was great and I really appreciate that. It’s humbling to see how many people, both inside and outside the game, care about how you’re doing in poker tournaments. I think the support is especially important for us live tournament grinders who end up having a losing day the majority of the time, so I truly appreciate all the support I’ve received from friends and family.

We haven't seen you on the Circuit much. Where have you been and how does it feel to just show up to Rincon and win a ring in the first event?

For the last couple months I haven’t played much poker as I’ve just been taking some time off to enjoy life outside of the game. I hadn’t played on the Circuit since April until I went to Tahoe a couple weeks ago and played several tournaments there. I had three pretty deep cashes but couldn’t win one up there, so it feels great to be able to win the first one in Rincon. The win also put me in a good spot to contend for the Casino Champion, so it’s given me extra incentive to play every ring event here.

During January and February I’m going to play the Circuit at the Bicycle Casino, then the LAPC at Commerce Casino. Between those two I’ll end up playing over 40 live tournaments the first two months of the year. Afterwards, I’m not sure exactly what I’ll end up doing regarding poker. I definitely intend on qualifying for the WSOP National Championship so I’m going to travel to several Circuit stops, and otherwise will mainly play all the good live tournaments in LA. I’ll likely play Bay 101 after LAPC since I had a good experience there this year, then just take it from there.

Check out Masek’s post-victory interview with the WSOP’s Nolan Dalla: