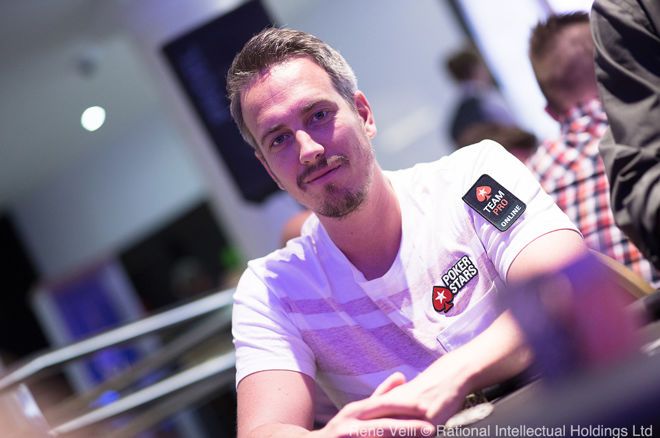 PokerStars has pulled of an incredible feat; organizing the biggest $25,000 buy-in event in the history of the game with 1,039 players signing up. The atmosphere in the tournament room was, as a result, more than good with smiles all around. One of the bigger smiles belonged to Lex Veldhuis when we talked to him on Day 1 of the event. And while he has since been eliminated, Veldhuis stands by his words on this event being incredible.

You're wearing a PokerStars patch so being excited about this event is mandatory, but I imagine you'd feel the same had PokerStars not been your sponsor.
Yeah, I think the response has been very positive, enthusiastic overall. We had a party for the Platinum Pass winners the night before the event started and I heard all these stories about how the people came here. I met the guy who qualified through my twitch stream promotion. I mean, it's incredible. The stories you hear; this is such a big thing for them.

"People from pure fandom level get to play an event like this, it's incredible."

People from pure fandom level get to play an event like this, it's incredible. You really sense that the people love it. There's a lot of chatter at the tables about it.

And, of course, there are the nerves. I had a guy at my table wearing sunglasses and a hat. I had no idea whether he was a qualifier playing an event like this for the first time, or an online pro. Then, when he raised for the first time, the chips almost fell out of his hand he was shaking so much. Yeah, that is kind of a tell for sure.

There are, of course, also Platinum Pass winners who'll play extremely solid, but just the whole event is sick. I said from the get-go I expected the event to get over 1,000 players, but it was more speaking about what I was hoping. It's just cool to start the year with an event like this.

There's a mix of players; from unexperienced qualifiers to top pros and from people that are taking a shot to people coming back from retirement not to miss out. What do you think about the field?
It's an excellent field. It's better than some $10,000 events. If you crushed poker four years ago but since haven't played as much anymore but coming back to play this one, that also adds to this event being so good. You see quite a lot of those players. But even though they haven't forgotten about everything, the fact remains that they haven't kept up to date on poker. A lot of stuff happened in the last four years; new little tricks have been discovered, certain spots are now better figured out. I like to think I'm better up to speed on such developments. I'm pretty confident playing in a field like this.

Where do you rank yourself in a field like this?
That's a tough question. When I walk through the tournament room, I don't recognize most of the online crushers. If you play the Daily $500s and are a regular in the $1,000 Sunday Warmup, you'll be better than me, and it's likely I won't recognize you. I'm not sure how many of these players are here, so it kind of depends. I think I'll do well against the rest of the field. If you have two or three of these guys at your table, it makes things tough. But in any other $25,000, there'll be at least five or six of them at the table.

So Top 5 percent of the field?
I don't think I'm in the group of best 50 players in this tournament, but Top 100 isn't a stretch I think.

Your hands don't tremble while playing a $25,000 buy-in event, even though you're not a regular in these things?
I fired two $25,000 bullets in the last WCOOP, but that was such a strong field I wasn't really even expecting to be winning in the long run. Even though the pots themselves were sometimes stressful, the overall feeling wasn't stressful.

I've played quite a few $2,000s and $5,000s last year, so I feel pretty confident about my tournament game. I know what my strong and weaker points are, I know from what kind of spots to stay away. I've also played a lot live in recent months and enough $25,000s in my life, so the experience is there. I've been here before so that releases some of the tension of playing in such an event.

Last year at the PCA, I interviewed you about your Twitch stream and how you kept reinventing yourself. Now, with 2018 behind you, how do you look back at your stream since?
It really couldn't be better. If I had only half of it, I would've taken it. I'm just thinking how great it's all been. I can't believe where I'm at right now with my Twitch stream.

The last five or six months I've been very consistent with my viewership numbers, it's been quite steady. It's hard to really grow fast.

Have you reached a ceiling when it comes to concurrent viewers?
No, not a hard ceiling. It's really up to me now to grow the poker directory on Twitch. With the numbers I'm now getting, I get pretty high up in Twitch's overall directory. When I stream on a Sunday and get 9- or 10,000 viewers, I make the Top 15 of Twitch's overall directory. That means that a lot of people who browse Twitch see my stream. Hopefully, they think 'oh cool, poker' and start watching. And those are the exact people I want to attract and the people I need to grow my channel. But that's a tougher demographic to reach and to get to tune in again, compared to those who are already poker fans.

I think there's a lot more potential in Twitch and poker. It's my goal for the year to get more mainstream attention for poker and introduce more new people to poker through my channel.

Do you think poker is important for Twitch just as much as Twitch is important for poker?
I think poker is unique to Twitch because people who are playing buy in themselves. They pay money to play and win money. When you watch a Hearthstone streamer, he or she is invited to a tournament because they're good at the game, but they don't have their own money on the line. That's unique to poker; the players are uniquely invested, and as a viewer, you can feel that. Sweating with someone who has money on the line is a different experience, I think.

Professional poker players need to try to not give away too much. On top of that, with 15 years of experience as a professional poker player, you must have seen it all by now. Do you need to act when on stream - screaming it out when you get a bad beat - or is that your true nature?
I think, when you're playing a competitive game, it's triggered automatically. The emotions come naturally. At least for me. When I lose a pot live, I won't be jumping out of my chair. But when you're at home, it's a lot different.

There are stories of Patrik Antonius throwing his computer mouse through the window after losing a pot playing online. The stoic Fin supposedly is as engaged as anyone when playing online poker.

Twitch gives people a view into the real life of an online poker pro. There's so much happening and with Twitch you get to see it all; the raw emotion. On top of that, the community fuels that emotion. When you win a hand and the whole chat explodes, you just feel the hype. You just go with it; you get fired up when something big happens and the community responds. I really see through their eyes how cool it is to be a poker pro. It's a poker party where everyone is hyped up when you go deep, and everyone is invited.

Talking about showing emotions in poker, a debate arose yesterday about players covering their faces in events like this. Christoph Vogelsang had his head buried in his hoodie, and Kenny Hallaert argued on his twitter that wasn't the way to go. Jake Cody, on the other hand, argued he would not object to his attire at all. Where do you stand in all of this?
Let me put it like this; I agree with Jake that I would never tell someone what to wear or force someone to be engaging at the poker table. But, if you bury your face in a hoodie, you're the last person I want to hear anything from in terms of what is and what isn't good for the game because you're not doing anything yourself to improve the situation.

"He has every right to play his game the way he does, but I have the right to have an opinion on that."

To be fair, I don't hear Vogelsang complain about 'what's good for poker' usually.
True, so I'm talking more broadly. There are people enough who are critical, who don't help their own cause by any means either. Someone like Vogelsang does nothing for the game but win, and he has every right to do so. But I don't enjoy watching it, especially not during an event like this. I would say we should all try to make things fun at the table, but that's no obligation. He has every right to play his game the way he does, but I have the right to have an opinion on that.

Do you take some extra effort in events like this to show Platinum Pass winners a good time?
Yeah, I might show a hand that I usually wouldn't, for example. And I might engage with some people at the table a bit more than I usually would. I think that's important in a tournament like this. That doesn't mean I don't take this tournament serious or that I don't play as hard as I can, but I do want to create a fun environment.

Busted 3rd hand of the day AA vs QQ. I don’t even know what to say anymore.