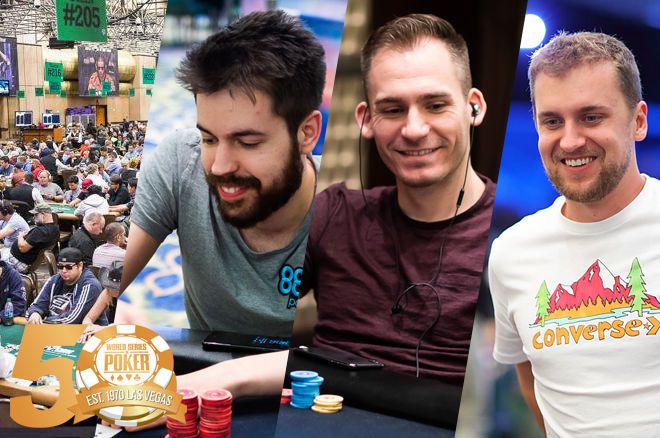 Bit by bit, Caesars reveals the full World Series of Poker 2019 schedule. With a teaser first, then the smaller events, and now the $10,000 and up event data, the major outlines for this year's WSOP are now available.

In the break of the $25,000 High Roller at the PCA, PokerNews talked to WSOP 2013 Main Event champion Ryan Riess, all-time money leader Justin Bonomo, and high roller regular Dominik Nitsche to get their initial reactions on the upcoming WSOP schedule.

Nitsche, too, will take it a bit easier this year. From the PCA, he's going straight to Melbourne for the Aussie Millions because a friend of his is getting married in New Zealand right after the series, but other than that he's clearing his schedule for a different endeavor. "A friend and I are developing a poker app that's coming out soon. That's my main focus right now, so I'm not even playing that much, I'm just working on that."

Riess: "I'm having a baby in like six weeks, so I'm probably going to be taking a little bit of time off before WSOP."

Asked what the app is going to be like, Nitsche explained it's a poker training app. "I don't want to say it's a solver for your phone, but it's kind of similar. It's an app where you can practice training against a computer that has solutions in there." With a beta test coming up soon, the app development is in its finishing stage. Still, Nitsche has quite a bit of work left to do: "I just hope it's ready before the World Series."

After an amazing 2018, the best in poker history by a set of different metrics, Bonomo looks back with great pride: "It was such a great year, couldn't ask for more." For 2019, unlike Nitsche and Riess, Bonomo remains focused on poker alone. "I got a good idea of what tournaments I'm going to play. I'm going to keep working on my game. [I'm] probably going to take a little bit more time off poker. Basically the same as last year though."

WSOP Plans and Thoughts on the Schedule

For the WSOP, Riess plans to be out in full force: "I live in Vegas, and my family will be with me, so I'll be playing the bulk of the schedule. Maybe not a lot of the mixed games, like I'm not going to play the $10k Stud8 for instance, but I'll play all the Hold'em tournaments."

Bonomo, too, intends on being out in Vegas for the full summer. "Every single year I've done the full schedule. I have a place in Vegas so I'll be there," Bonomo said.

Nitsche: "I'm kind of sad to not see a $25K no-limit, because I kind of expected that."

While Riess and Bonomo will be playing non-stop the entire seven weeks of the WSOP, Nitsche has different intentions. "I'm kind of sad to not see a $25K no-limit, because I kind of expected that. I see it as a buy-in that clearly works. We're here at the PCA right now, and the $25K got a really good turnout. And the PSPC has been successful as well so clearly there's demand for a $25K no limit. I'm very surprised to see that missing from the schedule."

As a result of the absence of a $25k event to fire mid-series, Nitsche intends on splitting his WSOP plans into two trips: "With not much going on, I'll be going home in the middle. I'm kind of happy to get to go home in the middle because being out there for eight weeks is a bit draining. So you'll only see me for the $50K, and you'll see me at the end for the $100K and the Main Event." Nitsche concluded: "For me, it should be a summer with a lot of weeks off."

Asked about his overall thoughts on the schedule, Bonomo seemed content: "The schedule does look good; there's a $50K and a $100K no limit. They haven't released the full schedule, just the high buy-ins, but yeah, it looks good."

Besides being interested in what events were on the schedule, Bonomo first looked at the dates for the Main Event (scheduled July 3-16). "When I saw the schedule, the first thing I looked for was 'Does it conflict with Burn in the Forest dates? (tentatively scheduled July 18-21)?' It's the Burning Man regional event in Vancouver, and I've wanted to go for years, and every single year they schedule it during the World Series Main Event. I'm really happy that there's a good chance I'll be able to go this year as it won't overlap with the end of the World Series."

Riess is especially looking forward to playing the inaugural WSOP short deck event. "I haven't played short deck yet, but it's a $10k right? Yeah, I'll definitely play. If it was bigger probably not, but $10k is good."

Bonomo is on board too, saying the event should be interesting.

Nitsche, on the other hand, wasn't too sure whether he would play the event or not. "[It's] not for me, I don't care enough. I might just give it a punt just for fun, but my focus will be on other things this year."

Riess is happy with the change: "I played the $100k last year when it was in the beginning. I much prefer it to be in the end because I think it'll get bigger. If someone wins a lot of money, they might be more likely to play it."

Not only does Riess think it might get more people in who had a successful series, placing it at the end has another advantage. "If it's in the beginning, it's hard. Say you play the $100k and you lose, now you're playing $1,500s and $1Ks, and it's so hard to get it back. I'm glad they changed that. I'm looking forward to it."

Besides a big slab of $10,000 and high roller events, the WSOP 2019 schedule is plastered with smaller buy-in events spotting unique names the poker community has grown accustomed to by now.

The Mini Main Event, a tournament with the same starting stack and blind structure as the Main Event but with 30-minute levels instead of two-hour-long levels and a $1,000 instead of $10,000 buy-in, is the latest addition. Riess welcomes the new format.

"I'm a big fan of any small buy-in tournaments. I might not play 'em, but I still think it's great for poker when they have the gimmicks like the Millionaire Maker, Monster Stack, Colossus, the Giant. All these gimmick tournaments, where they put a name on it, I think it's good because it gets people to come out. The Mini Main Event sounds good. I don't know if I'll play it but I probably will. So I think it's good for poker."

Like Riess, Nitsche too is a big fan of the smaller events at the WSOP, even though he might not necessarily play them. "The World Series is amazing with that stuff, that's what they're good at. I think there's demand for more higher stuff but there's also demand for the lower stuff and that's where the World Series excels. They're really good at putting up $1Ks, $1,500s, and even smaller events that attract the recreational players and that's fantastic. That's what the World Series is all about. So yeah, I think they've done a tremendous job with this."

Nitsche is especially appreciative of the Big 50 No-Limit Hold’em (May 30 – June 2). "The opening $500 is going to be amazing, and I think it's the first time in history where they're doing something rake free which I think is really nice. They're giving it back to the right kind of player, and I have no complaints about this."

Still, Nitsche reiterated his sadness over the small offer of (Super) High Rollers. "It's just at the higher level that the Aria is kind of putting on the show for the bigger names and that's kind of a shame because the World Series name is so big; I definitely think they could support a couple of higher buy-ins. But at the recreational level, the World Series is fantastic."

Bonomo agrees: "I won't play those events. Usually there's bigger stuff at Aria. But yeah they're good tournaments. They get tons of players. People tend to like 'em, so yeah, they're good events."

Thoughts on a $400 Buy-in Bracelet Event

The Mini Main Event and the Big 50 No-Limit Hold’em are just two of many events with a small buy-in. The smallest of them all is the Colossus that has a $400 buy-in this year, $165 down compared to last year's edition that cost $565 to enter. While some critical thoughts were heard when the WSOP announced the buy-in drop, Riess is once again all for it.

"Again, I think it's good for poker. I don't know what the thought process was to drop it by $165 bucks. Maybe they think it'd get that many more people. Again, I might not play it, but I don't have to play everything. The more tournaments, the better. Keep adding tournaments, it's good."

"They're really good at putting up $1Ks, $1,500s, and even smaller events that attract the recreational players and that's fantastic."

Some in the Twitter-sphere have said these small buy-in events devaluate the bracelet or WSOP brand. Riess doesn't agree. "That tournament is so hard to win because there's like 20,000 people. So I think [...] they don't need to put an asterisk next to it. I think that bracelet is way more valuable than some others. This one is way harder to win [...]"

Still, there's a limit to how low the WSOP should go, Riess thinks. "I don't want them to have $100 bracelet events. Maybe this is the lowest they should go. $400 is good, don't make it $50 bracelet events, nothing like that."

Riess concludes his positive look on things: "They're trying; they're innovating, they're doing new things. Props to the WSOP!"