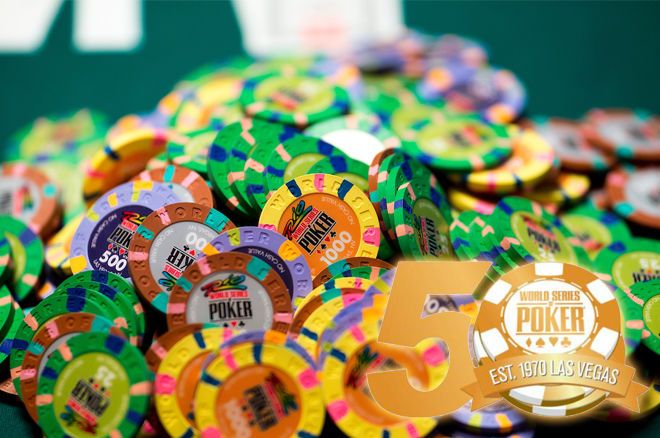 Late December last year, Caesars Interactive Entertainment announced the dates for some of the flagship event for the 50th Annual World Series of Poker (WSOP). Now, dates for many more popular events, including 20 events priced at buy-ins of $10,000 or higher have been released for the WSOP 2019.

Annual signature No-Limit Hold’em events such as the Casino Employees, Ladies, and Super Seniors have finalized dates, as do popular events like the Double Stack, Marathon, Little One for One Drop, and The Closer.

A list of the all the events confirmed for the 2019 World Series of Poker:

A downloadable PDF (333kb) can be found on WSOP.com.

In addition to an array of affordable events for the more casual poker player, the 2019 schedule will once again offer the most popular variants in poker at buy-ins of $10,000 and up to attract competition among the best players across all the games.

Among these offerings will be the WSOP's first-ever Short Deck No-Limit Hold'em, the popular new 36-card variant that is played with the deuces through fives removed. The $10,000 buy-in Short Deck event will last four days and kick off on Sunday, June 2 at a special time of 6 p.m.

Another schedule highlight in celebration of the WSOP's 50th anniversary is a $50,000 buy-in No-Limit Hold'em tournament where players start with 300,000 chips and play to one-hour levels. This high roller is slated as a four-day event that begins on Friday, May 31 at 3 p.m. with registration open until the start of Day 2.

One of the most anxiously-awaited events of the year, the $10,000 WSOP Main Event, is scheduled to run from July 3-16, each day with a noon start time. Flight A kicks off on Wednesday, July 3 with Flights B and C running on July 4 and July 5, respectively. Survivors of the first two flights will play Day 2AB on Saturday, July 6 while Flight C survivors will play Day 2C on Sunday, July 7. All fields combine for Day 3 on Monday, July 8 with play expected to reach the money before day's end.

The Main Event remains a freeze-out format with no reentries allowed, but some slight changes are in order for the 2019 version. Players will receive 60,000 chips rather than the customary 50,000, and play with the Big Blind Ante structure. Also new this year, players can buy into the Main Event up until the start of play on Day 2, meaning on July 6 or 7 at noon.

The popular Colossus event is back, with starting days on Wednesday, June 26 and Thursday, June 27. The Colossus will be the lowest-priced gold bracelet event on the 2019 schedule, with a $400 buy-in - down $165 compared to last year's $565 buy-in. It comes with 40,000 in starting chips and will play 40-minute levels throughout. On June 28 the survivors see the field combined for Day 2 with the final table scheduled for Saturday, June 29.

In an effort to "improve the overall experience for participants," the WSOP announced in a Jan. 23 presser that many events would feature bigger starting stacks, and all events with antes will play with a big blind ante.

Due to the new chip structures, blind structures will also be adjusted, the WSOP confirmed to PokerNews. It isn't clear exactly what changes will happen, but some events are now listed as four-day events on the schedule.

Here's a chart outlining many of the chip changes, although special events will feature their own unique chip structures:

The big blind antes had already been announced for the Main Event, and they'll be applied to all events with antes, including the popular Daily Deepstacks, for which chip structures remain unchanged. The exact way to apply the big blind antes hasn't yet been standardized across the industry, but for the WSOP, players without enough chips to cover both the blind and the ante will post the blind first.

Finally, the WSOP announced a special event open only to previous bracelet winners. On July 10, any player who has won a WSOP gold bracelet is eligible to participate in $1,500 Bracelet Winners Only No-Limit Hold'em. The 1,078 players who have won bracelets in the past, plus 2019 bracelet winners, can compete in the event, which features a 50,000 starting stack. The special tournament is part of the 50th anniversary celebration at the WSOP.

On January 30th, the WSOP announced seven more events to complete the live tournament schedule at the Rio for 2019.

Low-stakes players can rejoice, as WSOP brass clearly targeted that demographic with the last of the events announced for 2019. There will be a slew of $600 and $800 buy-in events akin to many of the tournaments found around the city of Las Vegas at other venues during the WSOP, with the added carrot of gold of a bracelet to lure players to the Rio.

They'll build to a $600 Deepstack Championship No-Limit Hold’em on June 25, with $500,000 guaranteed and a WSOP Main Event seat added to the prize pool for the winner.

“We hope everyone who loves the game of poker comes out to experience our big 50th,” Effel said in a press release. “We are confident you will find an event or two to your liking, and hopefully one that allows you to raise the gold bracelet over your head at the end of it.”

The latest additions can be found bolded in the schedule below, with the first one scheduled for June 3.

Additionally, the WSOP has doubled down on its charity focus for 2019. The usual partnership with One Drop, which raises thousands of dollars each year, is back, but U.S. military veterans will also benefit this year from the $500 Salute to Warriors No-Limit Hold'em.

Scheduled for July 2 and ending on July 4, this three-day event will raise money for United Service Organization (USO) and "other veteran organizations." Salute to Warriors is an open event but will have a focus on encouraging active military and veterans to participate. It isn't clear yet how much of each buy-in will go to the charities, but the WSOP confirmed to PokerNews that such details would be announced when finalized.

Finally, the WSOP announced some slight changes to the Daily Deepstack schedule. In addition to the usual Daily Deepstacks, a weekly $250 Pot-Limit Omaha Deepstack will be held on Sundays. Seniors, meanwhile get their own $250 Seniors Deepstack on Wednesdays.

With the above additions and the specific phrasing of "final live events confirmed" used by the WSOP, it's clear that any further events added will be online events. The online bracelet events, beginning with a single $1K in 2015, expanded to four tournaments in 2018 with a boost from the shared liquidity player pool.

However, the effects of a recent Department of Justice announcement haven't yet been fully parsed by the industry and may be giving the WSOP pause in this department. Stay tuned for more information on these events in future weeks.

"Things are starting to come together on the rest of the 2019 WSOP playing schedule," said Effel. "Being this is our 50th running, we are doing everything we can to make this year’s iteration bigger, better and more valuable for players."

"Being this is our 50th running, we are doing everything we can to make this year’s iteration bigger, better and more valuable for players."

Individual event online pre-registration won't open until March/April after all events have been determined and approved by regulators. WSOP.com’s real-money online poker offerings in New Jersey and Nevada will be the exclusive online home for players in these states to win seats into WSOP events, including the Main Event, as well as to participate in the exclusive online WSOP official gold bracelet events. 888poker remains the WSOP's international online poker partner in most jurisdictions, with several satellite qualifications planned to award seats to the WSOP in Las Vegas.

All above-announced dates, times, and events are subject to change, according to the WSOP press release.

The 2019 WSOP runs May 28 to July 16, 2019, once again at the Rio All-Suite Hotel & Casino in Las Vegas. PokerNews will be the WSOP's Live Reporting partner covering all bracelet events with live updates from the tournament floor.