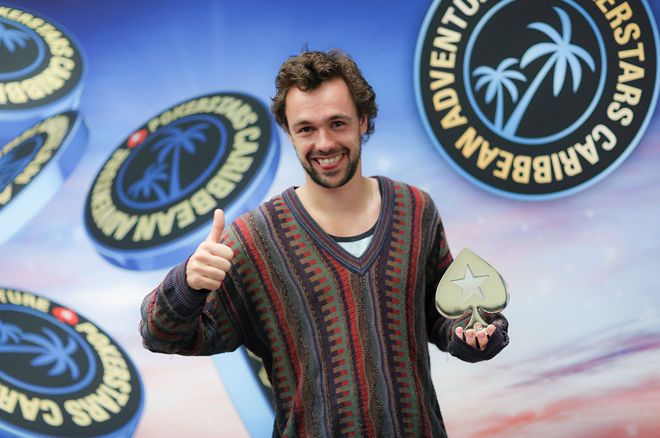 Winning a big live poker tournament is a great accomplishment. Winning multiples puts you in a select group. And then, there are players who are in a league of their own, such as Ole Schemion.

On a day that saw a field from 122 whittled down to one in the span of twelve hours, the man from Germany reigned supreme for the 17th time in his poker career. The win in the 2019 PokerStars Caribbean Adventure (PCA) $1,100 National, worth $148,220, also propelled Schemion over the $15M mark in lifetime winnings on The Hendon Mob.

"I didn't really care [about the opponents], I just wanted to play my cards."

Like last year, when he won the WPT in his home town of Berlin, Schemion started the year with a bang. He followed up on last year's victory with a successful series in Monaco before taking time off from the live circuit for the birth of his second child, which also made him opt out of the 2018 World Series of Poker.

Schemion-fans don't need to worry: "wizowizo" is back in full force after making his second six-figure ship in short succession, following up on a second place in the €10,300 EPT Prague High Roller last month.

"I feel good, very good," Schemion said shortly after receiving another spadie for his mantlepiece.

The final table went smoothly, and despite facing some tough opposition Schemion wasn't singling anyone out. "I didn't really care [about the opponents], I just wanted to play my cards," he told PokerNews.

"It's a good start to the year, I had a good finish and start last year too," he grinned.

At noon local time, 122 survivors from an 812-player field returned to the Atlantis Resort in the Bahamas for the second and final day of the PCA National.

Although the buy-in was one of the lowest on tap, the field was chock-full of big names looking to parlay their investment into a sweet six-figure score. With the bubble done and everybody already having a min cash secured, chips were flying everywhere right off the bat.

A flurry of early bustouts saw the likes of Will Givens, Joe McKeehen, Marvin Rettenmaier, and Jon Turner all hit the rail in quick succession. Defending champion Maria Konnikova's title defense attempt also came to an end in the early stages after losing the majority of her chips to Maria Ho with ace-ten versus queens. Ho wasn't able to make those chips work for her and busted shortly after.

Chino Rheem claimed the spotlight during most of the day, even holding the chip lead at various points. Ultimately, the American just missed out on the final table. It was Schemion himself who pulled the trigger with pocket nines against Rheem's ace-ten on the final table bubble. The big flip landed in Schemion's favor, and Rheem had to settle for $9,100 as a consolation prize.

"It's a good start to the year, I had a good finish and start last year too." -Ole Schemion

At the final table, Joe Cote was the first player to bow out. The elderly statesman made his first recorded cash outside of the U.S. by finishing in 9th place. Following him out the door was Aliaksei Boika, a former EPT Champion. The Belarusian added $13,900 to his lifetime winnings of over $1.6M. Germany's Timo Kamphues was the third victim at the final table and won $19,780.

For Jack Sinclair, there wouldn't be a second victory after his big win at the WSOP Europe three months ago. Sinclair was wrestling with Schemion all day, and the latter was the one to make him tap out. Sinclair met his demise by four-bet shoving ace-queen into Schemion's ace-king to finish in sixth place.

Conor Beresford, Alexandre Santo, and Platinum Pass winner Dragos Trofimov were the three next to go, leaving Maurice Costigan as the only one left to oppose Schemion.

Costigan started the heads-up with a 2:1 chip disadvantage and went big during the first sizable hand of the heads-up to turn things around. Holding ace-eight, Costigan check-raised on the turn when an ace fell, then shoved all in on the seven river for heaps. Schemion had ace-seven and called to win his seventeenth career title.

The $1,100 National may be over, but the PCA going on is still in full force. Check out the PokerNews Live Reporting for PCA Main Event live updates, $100,000 Super High Roller final table updates, and $100,000 Single-Day live updates.