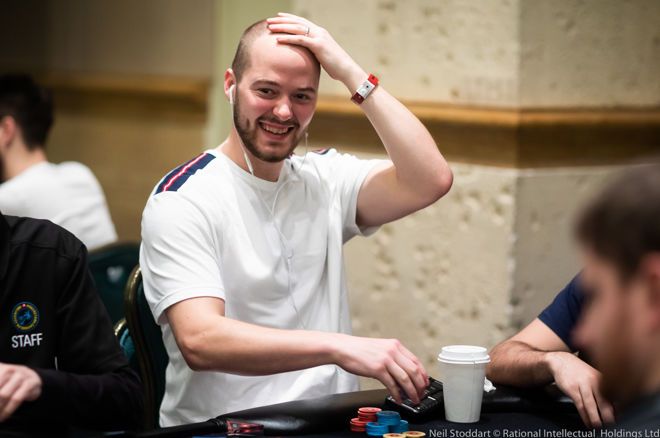 In what should have been a one-day event, Sean Winter has been crowned the winner of the first $25,000 Single-Day High Roller at the 2019 PokerStars Caribbean Adventure on the added second day of play.

Winter defeated David Peters after only three hands on the second day to claim the first-place prize of $495,210 while Peters took home $352,040.

This win will take Winter's lifetime earnings up to over 11 million in total according to Hendon Mob and will be his seventh largest cash ever. For Peters, this cash will take him close to the 30 million mark.

The first regular High Roller of the week attracted 75 entries, including 25 reentries. All those entries created a total prize pool of $1,800,750.

During the first eight levels of Day 1, 68 entries were collected with another seven players jumping in during the 80-minute dinner break. PokerStars Team Pro, Igor Kurganov, Steve O’Dwyer, Joe McKeehen, Isaac Haxton, Joe Cada, Jean-Noel Thorel, and Timothy Adams were some of the players who took their seat in the first level of the day.

Cada was one of the first unlucky players who was sent away from the table when he shoved on a trey-queen-seven-five-nine board with king-high and was called by O’Dwyer who held pocket nines. Many more familiar names joined the field just before the first break of the day, including Alex Foxen, Byron Kaverman, Cary Katz, Jason Koon, Manig Loeser, Matthias Eibinger, John Juanda, and Rainer Kempe.

When registration closed after the dinner break, players were sent to the rail in quick succession. Players like Ramin Hajiyev, Andras Nemeth, Steffen Sontheimer, Benjamin Pollak, Bryn Kenney, Elio Fox, Daniel Dvoress, and Ben Yu were all eliminated without cashing.

The bubble lasted for almost two hours as only eleven players would be in the money for a minimum score of $45,020.

Peters increased his chip lead when he shoved on O’Dywer who let his hand go on the river. Kaverman found a double through Ivan Luca with pocket tens while Luca held eights. Foxen tripled up with ace-queen against the jack-six of Winter.

The bubble finally burst when Jonathan Kamhazi put his last 10,000 in after having blinded down for a while. He busted to Jack Salter as his king-four couldn’t beat the king-nine of Salter.

Once the bubble burst, there was a flurry of action on both tables with Foxen being the first to cash when he ran ace-four into Winter’s ace-king. Erik Seidel was next to go when his jack-nine got no help from the board against Peters’ ace-king. With nine players left, it was time to combine the remaining players onto the final table.

Kaverman’s king-nine call when Kurganov shoved with king-queen on the flop didn’t earn him a double up as he was the first to leave the final table.

Not much later, Kurganov himself flopped top pair with ace-jack on a five-trey-jack-four board and decided to bet and call the shove of Peters. Unfortunately for the PokerStars Team Pro, Peters had the overpair with kings, and no ace or jack came on the river to save him.

Stanley Choi was taken down by Salter when his pocket eights got rivered as the ace came while Salter held ace-jack. O’Dywer’s king-jack were beaten by the king-queen of Winter, and then it was time for Luca to go when he ran king-six into the tens of Kempe.

Kempe tried bluffing Peters and lost a huge chunk of his stack, and then the remainder also got added to Peters’ stack when he shoved his last eleven big blinds with ace-four. Peters called with queen-nine and made trips on the river to take the German out in fourth place.

Salter’s run was over a mere five minutes later when he called with his last chips with queen-nine when Winter had put him all-in with queen-trey. The queen-four-trey-trey-nine board was no good for Salter.

Heads-up play lasted for around 90 minutes with Peters and Winter swapping out the chip lead and doubles back and forth. In the end, they had to bag up their chips as the tournament room was closing for the day. They agreed that they wanted to play the $50,000 Single-Day High Roller first before closing out this tournament and decided to delay it for another day.

In the end, they both decided to finish the tournament on January 10, after play ended in the $100,000 Super High Roller. Once it was time to start, Peters managed to double up in the first hand with five-deuce when he had flopped two pair, and his shove was called on the river by Winter who held nine-five.

In the second hand, Peters shoved on the button with nine-eight and Winter called with king-jack. Winter managed to double back up with the higher hole cards.

In the third and final hand of the night, Winter had limped on the button, and Peters checked. Peters check-called the continuation-bets of Winter on the seven-trey-queen flop and the ace on the turn. The eight came on the river and now Peters tank-called Winter’s shove with seven-deuce for Winter to claim the win with eight-seven as he had rivered two pair.

They shook hands and as quick as they came to finish the tournament, just as quickly they left the poker room via the payout desk to collect their cashes.

The PSPC and the firsttwo high rollers are in the books, but the PCA is really just getting started. Today, the $10,000 Main Event gets underway. Follow all the PCA Live Updates via the PokerNews Live Reporting section.