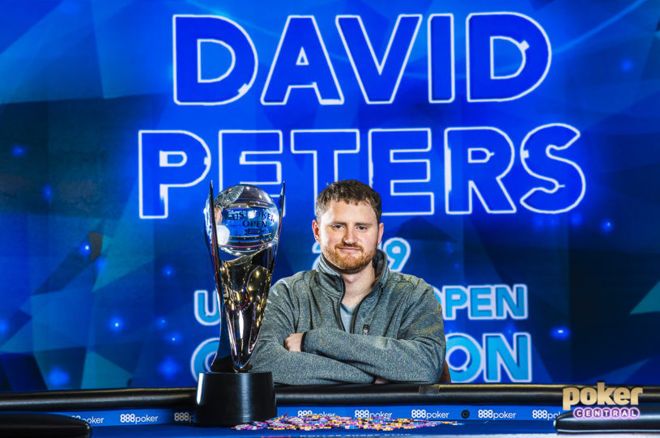 The 2019 U.S. Poker Open concluded its 10-event series Saturday night with the conclusion of Event #10: $100,000 Main Event, a tournament that began with 33 runners. In the end, David Peters navigated a tough final table to not only win the title for $1.32 million, but to come from behind and win the overall USPO Championship title for an additional $100,000.

At the start of the final table, Sean Winter was the favorite to win the overall USPO honors, but when he fell short of the money, which would’ve locked it up for him, it opened the door for Peters. A win and a win only would do it for Peters, and he delivered by taking down one of the most prestigious events on U.S. soil.

“This feels amazing,” said the 31-year-old Peters. “This is obviously a very prestigious tournament, a great series, and to come from behind and to pass Sean by 10 points at the very end, that’s a pretty-pretty crazy feeling.”

The day began with four players needing to hit the rail before the money was made. Nick Schulman was the first to fall after missing a flush against Chris Hunichen’s two pair. His departure meant Winter and Peters were the only players in contention for the 2019 USPO series overall championship.

However, when Winter bowed out in eighth place – the result of losing a flip with ace-ten suited against Keith Tilston’s pocket fives – he had a simple sweat. He would become the 2019 USPO Champion and claim the $100K bonus unless Peters won the tournament.

From there, Jason Koon exited in seventh place shortly after his aces were cracked by Martin Zamani, who flopped an open-ended straight draw and hit it on the turn. On the stone bubble, Justin Bonomo jammed with queen-jack only to run it smack dab into Ryan Riess’ ace-queen. Bonomo failed to get lucky and left emptyhanded in sixth place.

Once in the money, Riess busted after running pocket nines into Tilston’s jacks, and then Zamani followed him out the door in fourth courtesy of Tilston. Zamani had jammed with ace-ten and once again Tilston held with jacks.

Three-handed play lasted for a while before Tilston got his chips in with king-queen and failed to get there against Peters’ ace-six suited. Peters began a more than 2:1 chip lead against Hunichen in heads-up play.

In the final hand of the tournament, Hunichen limped with ace-eight and jammed after Peters raised with nines. The pocket pair held and Hunichen had to settle for second place.

That concludes PokerNews coverage of the 2019 USPO congratulations to all those who captured titles during the series, and to David Peters for being named the overall series champion to capture the $100,000 bonus courtesy of Poker Central.