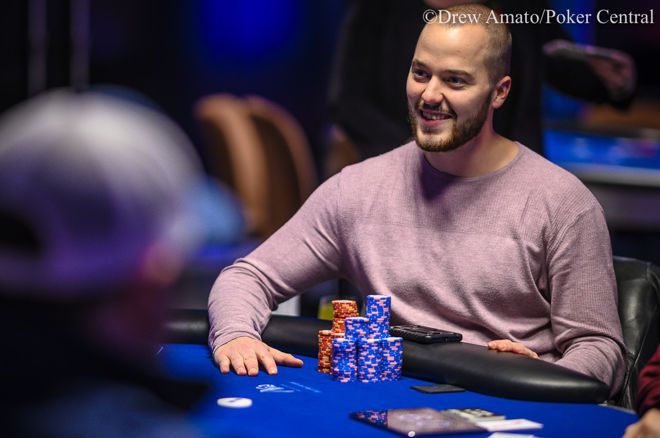 The last preliminary tournament of the 2019 U.S. Poker Open is now down to the final six and it is none other than Sean Winter leading the way into the final day.

Winter has been the hottest player of the USPO this year and remarkably will be appearing in his fifth final table of the series, having over $400,000 in cashes thus far and 440 points on the leader board, behind only Stephen Chidwick who has 540.

The Jacksonville native will be looking to surpass Chidwick tomorrow for the overall lead. He started stacking chips early and as usual talking up a storm in the process of doing so. Elio Fox decided to take a stab at besting Winter in a hand, running his ace-queen into Winter's Big Slick and failing to improve. Winter took the mid-day chip lead after that hand and continued to push his opponents to their limits, through his bets and his chatter. His mind games and aggressive play worked as he spun up the chip lead heading into the final day of the last prelim.

A star-studded field of players brought out some of the best poker play this week and the other five players to make the final day are not pushovers as Winter will have no walk in the park on his way to victory. Standing in his way are some of the best in the world, including the 2013 WSOP Main Event champion Ryan Riess, who will be coming into the day second in chips. David Peters will start the day in third and is the only other person to have over a million. Peters is fifth on the all-time money list, with career earnings of over $30 million and already had a runner-up finish this week in the $10,000 Short Deck event.

Alex Foxen is ranked number one on the GPI and will be starting the day fourth in chips. Other players to make the final table include Germany's Koray Aldemir and well-known pro Seth Davies, both making their second final table appearances of the 2019 USPO.

The tournament saw a total of 41 registration slips sold, creating a prize pool of $2,050,000 with the top six finishers all getting paid at least $123,000 and the eventual first place finisher taking home $738,000 along with 200 points towards the championship race.

Sam Soverel would end up being the unfortunate bubble boy, running his top pair into the aces of Riess on the last hand of the night. Other players to participate today but not make the money include Cary Kats, Nick Petrangelo, Nick Schulman, Manig Loeser, Bryn Kenney, Erik Seidel, Dan Smith, and Justin Bonomo.

The players will be returning tomorrow to battle it out at 1 p.m. PST. Blinds will begin at 10,000/25,000 with a 25,000 big blind ante and there will be a 10-minute break after every three levels of play. They will play down until a winner is crowned.