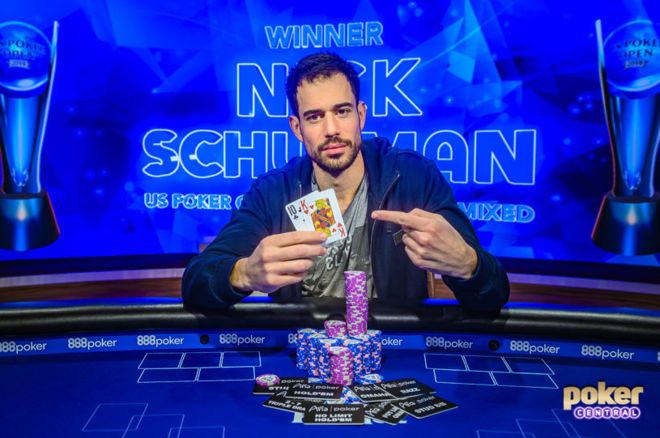 Nick Schulman is a frequent commentator on PokerGO, but on Thursday night he was on the other side of the lens competing in the 2019 U.S. Poker Open Event #8: $25,000 8-Game Mix Championship. The tournament attracted 20 entries including some of the world’s best mixed-game specialist.

When it comes to mixed games, Schulman not only competes against the best but more than holds his own as evidenced by capturing his first USPO title, good for $270,000.

"You gotta be pumped up to play with these wizards."

"It feels damn good," Schulman told USPO officials after the win. "There's nothing like winning a tournament, regardless of the field size. It feels great and getting a clear first is exciting."

Schulman now sits in third place in the overall 2019 USPO overall championship and is within striking distance of both Sean Winter and Stephen Chidwick.

The final four players returned to action on the money bubble, meaning one of them would leave empty-handed while the other three would be guaranteed an $80,000 minimum payday. As the chip leader Brandon Adams was seemingly safe, as was Schulman second in chips with more than twice as much as the short-stacked Randy Ohel and Chris Vitch.

Ultimately it was Ohel who fell in fourth place in a round of Stud 8. He committed with a small pair and failed to get there against Schulman, who had to small pair. Not long after, Adams took care of Vitch in a round of 2-7 Triple Draw. Vitch made a

low but Adams had just enough to beat him with

Heads-up play began relatively even and the duo would swap the lead on a few occasions. Things swung in Schulman’s favor when Adams overbet bluffed the turn in a round of no-limit hold’em. Schulman had both a flush and open-ended straight draw and check-jammed, which prompted Adams to fold.

From there, Schulman whittled away at Adams’ stack before the latter had to take a stand in limit hold’em with nine-deuce. He was up against king-ten and failed to improve sending him out the door in second place for $150,000.

With two events remaining here's a look at the overall 2019 USPO points race.

PokerNews coverage of the 2019 USPO continues now with live updates from Event #9: $50,000 NLH, which you can follow here.