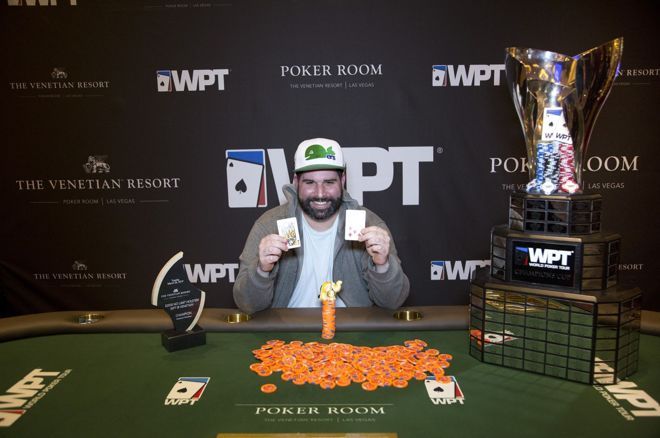 The World Poker Tour (WPT) hosted its first-ever stop at the Venetian in Las Vegas, and the $3,500 buy-in Main Event attracted 734 entries.

The tournament came to an end with poker pro Ben Palmer on top for $431,655, which includes a $15,000 entry into the Baccarat Crystal Tournament of Champions. Entering the tournament, the 35-year-old Palmer sat second on Venetian’s all-time cash list with 88 cashes. His 89th proved to be the biggest of his career.

"It means a lot. It's one of the casinos in Vegas I play at the most," Palmer told WPT officials after the win.

On Hand #69 of the official final table, Will Givens got his stack all in holding king-jack but failed to get there against the ace-eight of Mark Ioli, who followed him out the door in fifth place on Hand #109. That is when Ioli made two pair only to see Palmer roll over a turned straight.

Six hands later, Orlando Barrera shoved the flop holding kings and sixes only to see Tony Gargano table pocket kings for quads! The next bustout wouldn’t come until Hand #204, which is when Danny Qutami jammed with ace-eight against Gargano’s ace-queen suited. The superior ace held and Gargano entered heads-up play with a slight lead over Palmer.

The duo would battle until things came to a head on Hand #268. By that point Palmer had pulled out to a sizeable lead when Gargano jammed holding ace-four. Palmer opted to call with queen-ten suited and wound up making two pair to dispatch Gargano in second place for $277,760.

According to the WPT, it was the longest thus far in Season XVII and longest since the 284 hands it took Jason Brin to win the Season XIV WPT Choctaw.

The WPT’s next event will be in Florida from April 12-16 for the $3 million guaranteed WPT Seminole Hard Rock Poker Showdown.