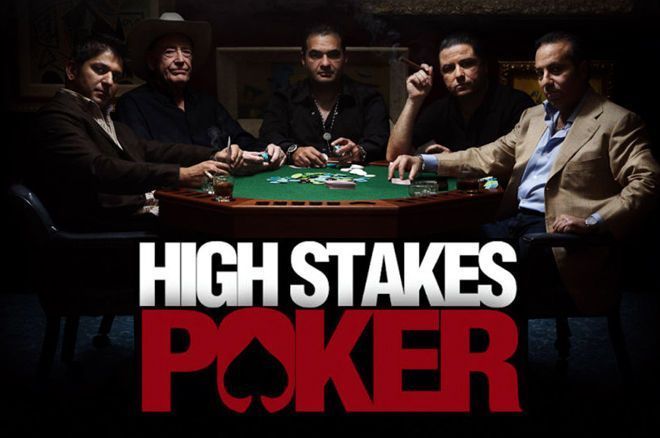 High Stakes Poker was a huge hit with poker fans around the world thanks to it giving an insight into the world of, well, high stakes poker. The Game Show Network started broadcasting the show in 2006 but pulled the plug five years later after seven action-packed series.

A press release hints there could be brand new episodes of High Stakes Poker created:

“Poker Central is finalizing plans for the future of the series, including new episode distribution through PokerGO and potential broadcast and streaming partners.”

“High Stakes Poker was a remarkable poker program," said Poker Central President Sam Simmons. "With star players, massive pots, and memorable moments, the show beautifully conveys the drama of cash game poker. Bringing the existing episodes of High Stakes Poker to our platform and producing more in the future will enable us to recapture the nostalgia and magic of the show for our PokerGO subscribers in the present-day poker climate.”

“High Stakes Poker was raw and natural, we just let the players play and that’s what made it so special,” said Eskandani. “It’s truly a dream come true to bring the series to a new generation of poker fans and players, and we expect even more action when the show returns with faces both new and old.”

High Stakes Poker struck a chord with the poker community because most televised poker at the time was tournament-related. whereas this put cash games front and center. Viewers got the chance to see what it is really like playing in “The Big Game” in the famous Bobby’s Room, with some monster-sized pots won and lost.

The show threw up some incredible hands, but these three stand out from the crowd. Do you remember them?

One of the biggest pots, and coolers, of High Stakes Poker involved a fresh-faced Daniel Negreanu taking on Gus Hansen.

. Antonio Esfandiari folded ace-queen, citing he was out of position against both Hansen and Negreanu, before Hansen tossed in $2,900 to call Negreanu’s raise.

flop gave both players a set that neither was going to get away from. Hansen checked, Negreanu tested the waters with an $8,000 bet into the $11,700 pot, and Hansen check-raised to $26,000. Negreanu called.

Hansen improved to quads on the

onto the river. Hansen checked, Negreanu bet $65,000 only for Hansen to check-raise all-in for $167,000. Negreanu, visibly shocked, stood from his chair while he thought about calling. Call he did, thus creating the largest pot the show had ever seen at $575,700!

Tom “durrrr” Dwan was involved in two incredible High Stakes Poker hands, this is one of them.

by Phil Laak, a call by Eli Elezra with

, and a call by Phil Ivey with

. Ivey was sat with more than $1 million at this point! Negreanu called with

. This folded out Laak and Elezra but Ivey called. Negreanu folded to leave the hand contested heads-up.

was the turn, a complete brick for both players. Dwan bet again, this time $123,200. Ivey called again. The

completed the board, giving Ivey a lowly pair of sixes. Dwan fired a $268,200 bet with nothing but nine-high! Ivey asked for a count before going into the tank for more than two minutes before releasing his hand, leaving Dwan to scoop the $676,900 pot!

Perhaps the most famous hand of High Stakes Poker was another example of Dwan’s genius, one of the bluffs of all-time.

The hand started with Barry Greenstein raising to $2,500 with the powerhouse that is

, Elezra tossed in calling chips with

and Doyle Brunson made it a full table of callers with

saw Eastgate flop trips, but he checked. Brunson checked behind. Greenstein made it $10,000 in an attempt to thin out the field but all it did was make Dwan pump it up to $37,300. This folded out everyone with the exception of Eastgate and Greenstein. Eastgate called and Greenstein followed suit.

turn saw Eastgate check despite having 90% equity in the hand, Greenstein checked and Dwan continued the aggression with a $104,200 bet, taking the pot to $237,700. Eastgate released his hand and so did Greenstein, the latter after much deliberation knowing his full $500,000 stack was at risk.

What makes this hand stand out is the conversation after both players folded. Dwan correctly stated Eastgate had the best hand, showing sometimes you have to play the player and not just the cards.

Here's hoping Poker Central create a brand new series of High Stakes Poker because it would be amazing to see some of today's "wizards" locking horns with vast sums of money at stake. Which players would you like to see grace the tables in a new High Stakes Poker series?