Run It Once Increases leadRboards Rewards After Highest Traffic Day Ever 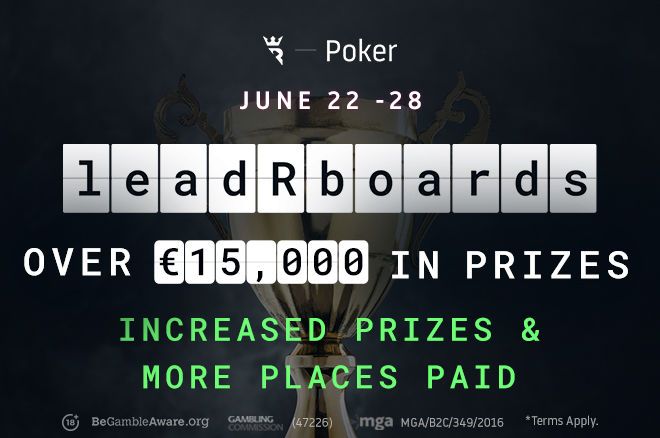 Run It Once leadRboards were launched less than two weeks ago, and they are already having a huge impact. Last Monday saw the site record its highest traffic day ever, with traffic "booming" in response to the launch of the leadRboards.

For that reason, this promotion has been enhanced and will now give away 50% more - increasing the total amount given away each week from €10,000 to €15,000.

Run It Once Poker Traffic "Booming"

Launched in February 2019, Phil Galfond's Run It Once Poker has gone from strength to strength, with a whole host of innovative promotions. Whether it's Cash Boosters, Aces Races, or one of the best first deposit bonuses in poker there are many reason to play on Run It Once.

And with the introduction of the Run It Once Poker leadRboards, you can see an instant response with the site enjoying record levels of traffic.

Not only has the total prize money given away increased to €15,000, it's now even easier for you to get your hands on your own little piece of it - or big piece of it, with top prizes of €2,000!

Instead of just the top five players on the leadRboard receiving money, now it will be the top 30 meaning there's less chance of you missing out on some cash.

Time is Ticking on the Run It Once 'Bankroll Builder' Promotion

New depositors at Run It Once Poker have always been able to enjoy exciting and generous offers but this latest 'Bankroll Builder' promotion promises even more extra goodies!

Players who make their first-ever deposit at Run It Once Poker will receive instant cash, extra rewards, & coaching!

Download Run It Once via our links, create your free Run It Once account, and make your first deposit of at least €10. With 'Bankroll Builder' Run It Once will be doubling all bonus funds released for the first four weeks!