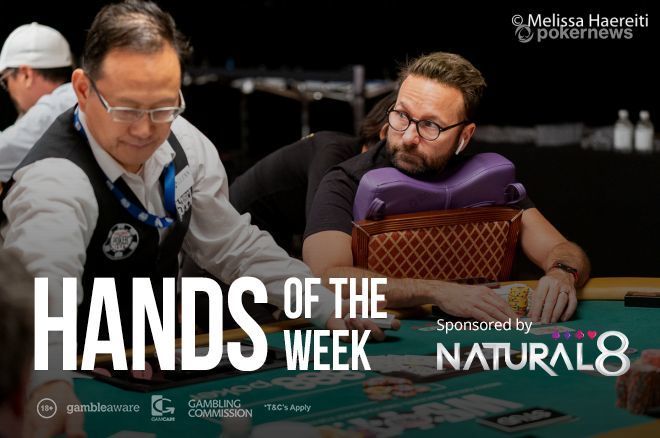 Natural8 was home to the WSOP 2020 Online which featured 54 Bracelet Events from July 19th through September 6th. All the Natural8 Winner's Circle have been claimed with up to $700,000 in Sponsorship awarded.

The 2020 World Series of Poker (WSOP) online bracelet events are in the books. Since the beginning of June, 85 WSOP gold bracelets were awarded on the digital felt across two different clients: WSOP.com and GG Poker, which includes Natural8.

Each week, we’ve highlighted a “Hand(s) of the Week,” which have included bad beats, lucky suck outs, and game-changing swings.

Both players checked the

flop and Vousden activated his time bank before leading the

river, Vousden made it 1.5 million to go and Timmis then moved all in with the superior stack. Vousden was sent deep into the think tank and he called for the 8,850,956 on top that he had behind.

and Vousden earned the double with

It all started rather innocent with a cutoff raise to 1.54 million by Stoyan Madanzhiev and Satoshi Isomae then three-bet out of the small blind to 4,483,500, which Madanzhiev called.

They headed to the

No betting action followed on the

for a stone-cold bluff.

Madanzhiev had flopped two pair with

Negreanu Beat By a Straight Flush

Meanwhile, in Sunday’s Event #83: $10K WSOP Super MILLION$, $5M GTD, GGPoker Ambassador Daniel Negreanu was looking to cash in on some bracelet events. Unfortunately, his last chance to get it done came up short due in no small part to being beat by a straight flush.

, Negreanu shoved for 223,475 and was called by Galinec with the bigger stack.

Negreanu had flopped a pair of tens but Galinec held the overpair.

The rest of the board was completed with the

Natural8 2020 WSOP Online Hands of the Week: One Outer in Three-Way All-In Pot