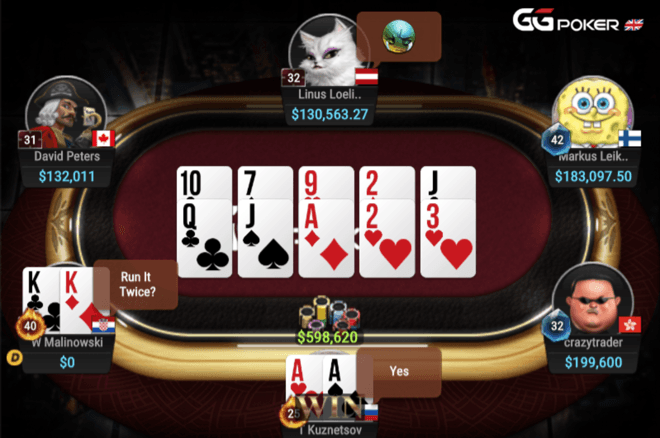 As the World Series of Poker bracelet events were winding down on GGPoker, the online poker cash game action was heating up to record levels. Six-figure pots were being won and lost on an hourly basis, as players swung millions of dollars over the course of a few weeks.

Thanks to the high-stakes railbirds at TwoPlusTwo, many of those massive pots have been recorded for fans to examine. PokerNews has compiled some of the biggest of the best that were played in September.

Read about the biggest pot in online poker history!

They agreed to run it twice. Malinowski didn't hit anything on the first board. On the second, he added an out when

flopped (one ten was dead from the first runout) but wheel cards on the turn and river missed him, sending a pot of $598,620 to Kuznetsov.

Leikkonen raised to $5,000 on the button and Kuznetsov called from the big blind. On the

turn and they went to a

He shoved that in when Kuznetsov checked to him, and the Russian legend didn't even need to use his time bank before clicking call with

. That was a winner as Leikkonen had

for a whiffed straight draw plus overcard on the flop.

First to act in a five-handed game, Kuznetsov raised to $4,500 and was called by Malinowski on the button and "crazytrader" in the big blind. Action checked to Malinowski on

and he bet $6,600. Only Kuznetsov continued to the

. Malinowski bet bigger this time with $22,140 and Kuznetsov called to see the

Malinowski tanked and called but his

Cash legends weren't the only ones playing big as nosebleed tournaments regs participated in the action. Chidwick was among them and he tangled with Loeliger in a three-bet pot, starting with the Swiss player making it $7,500 from the big blind and Chidwick reraising to $19,390 from the third blind.

. Both players checked that card and the river was the

. Loeliger checked and Chidwick shoved for $46,883, a little over half the pot.

Loeliger tanked and called, and his

for just a single pair was good on the treacherous board, as Chidwick held

that he'd opted to bluff with.

Learn about the latest promos on GGPoker, featuring millions in giveaways!

Playing four-handed, Loeliger raised to $4,000 on the button and Leikkonen made it $16,300 in the small blind. Loeliger called, bringing a

flop. Leikkonen bet $12,012 and Loeliger called. The turn was the

Leikkonen shoved for $59,964 and Loeliger snapped it off with the

, having run out a straight flush. Leikkonen had taken an extremely nasty one with

According to the PokerNews odds calculator, Loeliger had 0.71% equity on the flop.

Action folded to the small blind, where Malinowski made it $6,800. Loeliger called in the big blind and Greenwood repopped up to $29,200 in the third blind. Malinowski shoved covering both opponents. Loeliger folded but Greenwood called off for $222,428 more.

Greenwood offered to run three times but Malinowski declined. A board of

brought nothing for the Canadian tournament crusher, so Malinowski dragged $511,056.

Two tournament pros very familiar with each others' games clashed starting with a raise to $5,000 from Zhang on the button. Koon made it $25,700 in the third blind and Zhang called. On the

Zhang was drawing with good equity and they agreed to run twice. Not a single spade or three emerged, so Koon's heroic call shipped him a pot of $371,992.

Malinowski Bluffs Off to Tollerene

Malinowski raised to $7,000 in the small blind and Tollerene made it $19,750 in the big. Malinowski called. Tollerene continued with a small bet of $9,775 on the

flop and Malinowski made it $29,890 on a check-raise. Tollerene stuck around for the

turn. Malinowski bet $31,184 and Tollerene called. On the

river, Malinowski jammed for $147,995 effective, just a bit under the size of the pot.

Tollerene had been roping him along with

for a flopped boat, and Malinowski had been bluffing with

Russell opened for $5,000 first to act five-handed, and Addamo reraised to $22,500 in the small blind. The other blinds folded and Russell came along for the

flop. Addamo slowed down with a check and Russell bet $16,170. Addamo called, bringing the

river, Addamo checked again and Russell shipped it for $136,285.

Addamo tanked and called, but his

for flopped top pair was smashed the whole way by

for a straight flush. DEX888 showed down

for a turned full house.

All photos and hand histories taken from September High Stakes Thread on TwoPlusTwo.