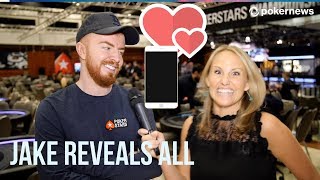 John Paul 'JP' Kelly is a professional poker player from Aylesbury, United Kingdom. He is best known for winning two World Series of Poker bracelets in 2009. He won his first one in Vegas by taking down the $1,500 Pot-Limit Hold'em event and then a few months later he scored the second one at the WSOP Europe when he came out victorious in the £1,000 No-Limit Hold'em event.

British poker pro JP Kelly had been playing poker for fun against friends and family for years, but never took it seriously until he started watching the classic TV show Late Night Poker. Like so many others, JP was inspired by the show to go and start playing the game himself. Unlike so many others however, he was willing to put in the hard work needed to learn the game properly, and was soon able to make poker his living.

Kelly was born in 1987 in Aylesbury, United Kingdom. Although he's been familiar with poker for a long time, it wasn't until he turned 17 that he started to take the game seriously. Like many young guns in poker, he left school in order to play the high stakes games and tournaments full-time and pursue a career as a poker pro. However, only a few of those who make that decision, actually succeed. Kelly was the one who did.

He has a solid record of live tournament wins stretching back to 2005, most coming at events held across the UK and Ireland. The first signs of the World Series of Poker success that was to come came in 2007 when he cashed twice in Las Vegas, including a 16th place finish in a $3,000 No-Limit Hold'em event. JP returned the following year and made the final table of a $2,500 mixed Hold'em/Omaha event, finishing in ninth place for $22,598.

A year later in 2009, JP was back in Vegas once again, and ready to make his mark on what was to be a great year for UK pros at the WSOP. He played in a $1,500 Pot Limit Hold'em event and won, walking away with the bracelet and $194,434 in cash for beating a field of 632 players. After a small cash in another event, he traveled back to London and amazingly won another bracelet at the World Series of Poker Europe, this time in a £1,000 No-Limit Hold'em event, good for a further $225,535. Not only had JP now well and truly arrived on the scene, he'd also become the first poker player from the UK to win two World Series bracelets.

With two WSOP bracelets already in his collection, Kelly still has to conquer the European poker circuit. He has a number of final table finishes in EPT side events on his record, however, when it comes to main events, Kelly has nothing to boast about. His best Main Event performance so far was at the 2006 EPT Barcelona where Kelly placed 26th collecting €11,500 in prize money.

Kelly used to represent the online poker giant PokerStars as a member of Team PokerStars Pro. However, in November, 2011 the partnership was terminated.