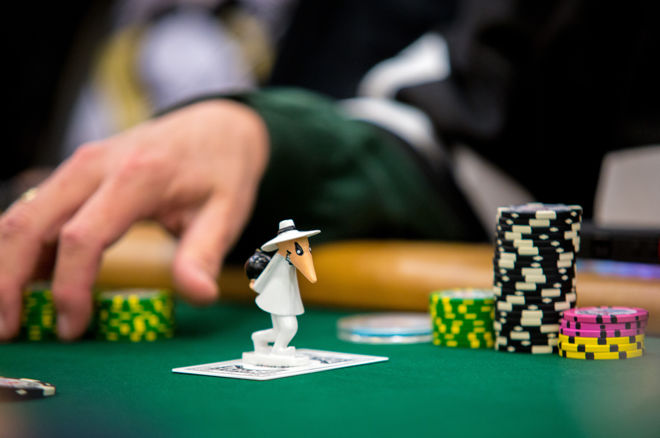 In no-limit hold'em, the term "slow playing" doesn't typically refer to players thinking about their decisions for a long time and playing their hands too slowly — although that is a commonly discussed topic these days, especially in tournaments. Rather, slow playing usually refers to a player playing a strong hand weakly in order to encourage opponents to stay in the hand and hopefully contribute more chips to a pot the player expects to win.

If you've heard the term "sandbagging," the idea is similar. A player who flops the nuts watches his opponent lead with a bet, and instead of raising he just calls or "sandbags" in order to disguise the strength of his hand.

If you think about it, slow playing is a little like other non-straightforward plays like check-raising or bluffing. You have a strong hand, but you choose not to represent strength and just check or call rather than bet or raise. Slow playing is essentially a deceptive play, and if executed smartly can result in your winning a bigger pot than you might have had you played your strong hand "fast" with bets and raises.

Below are two short lists of "do's" and "don'ts" when it comes to slow playing. The discussion mainly focuses on slow playing after the flop, although a player could slow play before the flop, too. For example, someone with pocket aces in the big blind might watch a very loose player raise from late position, then decide only to call rather than reraise, looking instead to start building a big pot after the flop arrives.

We're focusing mainly on postflop poker here, though — that is, the flop and the turn, streets on which if you do hold a strong hand, you have an option to play your hand fast or slow. (There's no slow playing on the river — the action ends after that betting round!)

Let's imagine a situation when you've flopped very strong and slow playing might be an option — say, you have

and an eight appears on the flop to give you a set. You almost certainly have the strongest hand. What factors might encourage you to play non-straighforwardly with it and slow play?

1. Do Slow Play... Versus Loose and/or Aggressive Opponents

Slow playing works best when you are facing opponents who play a high percentage of hands (are "loose") and who show a tendency to bet and raise a lot postflop (are "aggressive"). These players will frequently "bet the hand for you," so to speak, and start building a pot, often on the flop.

Against such players it can be profitable to just to call (or if out of position, to check and then call) on the flop, then perhaps raise the turn with your set. Of course, against some loose players you'll want to go ahead and bet your strong hand and let them raise you, as that might be a better way to get even more chips in the middle.

When you slow play you are essentially setting a "trap" in which you hope to catch an opponent (and capture his or her chips as a result). The strategy will often work more effectively against loose-aggressive players who are more likely to fall into the trap you are setting. It also works in situations when players don't seem to be paying attention to how you've been playing, say in low-stakes live games or in some online poker games.

So you've flopped a set with your

— let's say the board reads

. That's a very "dry" or non-coordinated flop, presenting no immediate flush or straight draws. This would be a favorable situation to slow play your set, for a couple of reasons.

One reason is that you don't fear giving a "free card" that might complete some draw for your opponent. On this flop, there are almost no turn cards that can hurt your hand, meaning your set of eights is almost certainly likely to still be best following the turn.

A second reason is that if you bet this flop, you'll often earn folds and a tiny pot when you stood to gain so much more. As we talked about when discussing "set mining," it's rare to flop a set, and when we have hands this strong we want to win big pots. Lead out with a bet on a dry board like this, and anyone without a king or pocket pair of their own is likely to go away.

3. Do Slow Play... In Heads-Up Situations

The advice here isn't always to slow play when you're heads-up, but rather to be more encouraged to slow play against a single opponent than in multi-way pots. Especially if your lone opponent is loose and/or aggressive and the board is not too coordinated, slow playing can be a reasonable option to try.

Multiple opponents add complexities to a postflop situation that can make slow playing a bad option (see below).

Now that you've learned all about slowplaying, how about putting your new found skills to the test by heading to WSOP Social Poker and slowplaying some of your opponents there? Don't worry if you make a mistake because all cash games and tournaments are free at WSOP Social Poker, meaning you can hone your skills until you've perfected them without ever worrying about losing a single cent!

Let's continue with the same situation — you've flopped that set of eights — and look at three factors that should discourage you from slow playing your strong hand.

Slow playing is generally a bad idea when your opponents tend to fold a lot and play few hands (are "tight") and when they do play are doing a lot of checking and calling (are "passive"). These players cannot be counted on to bet themselves, and so you need to do the work of building a pot once you've flopped that monster.

After flopping a set, leading out with a bet against such players is often a good strategy. If they are tight and only play strong starting hands, they are more likely to have something of value with which to call your bet. Also, passive players like to call and stick around to see turns and rivers.

Don't bother with trying to "trap" such players by slow playing, as you're more likely to miss value postflop.

Let's imagine different flops for your set of eights, say

— boards that are "wet" or coordinated because they potentially give your opponents flush or straight draws. It should be clear why these boards are less favorable for slow playing, and again we can cite a couple of reasons why.

First, you obviously don't want to be checking these flops and giving your opponents a chance at that "free card" on the turn that might complete their draws. On both of these boards, there are a lot of turn cards you wouldn't like to see that could make you less confident about your set.

Also, these are boards that are more likely to have hit your opponents' hands — they may have those draws, or they might have one-pair or even two-pair hands and will therefore be more likely to call if you bet. If they do have, say, just a pair and the turn is a "scare card" that appears to complete a draw, they might shut down after that which means you'll miss value later on in the hand.

(Be smart, though. Some boards are going to be so wet you'll want to put on the brakes — not to slow play, but to control the size of the pot. If you're looking at

on the turn, your set of eights isn't such a strong hand anymore.)

Finally, as we were noting above, if you flop a set or some other very strong hand in a multi-way pot, you'll more than likely want to bet the hand (or raise someone else's bet) and not slow play.

We have two final thoughts regarding slow playing to consider.

First, you'll encounter exceptions to all of the "do's" and "don'ts" listed above — that is, in some rare instances you might actually want to play fast against a certain opponent even though the board is dry, or to slow play strong hands versus multiple opponents. Consider the tips above as rules of thumb to follow, but like all such rules in poker, be ready to break them if circumstances strongly suggest you should.

Try your new strategies out for free at WSOP Social Poker and it will not matter if the read you have on your opponent is wrong because you won't be risking a dime playing on this awesome free site.

Lastly, don't slow play a big hand just for the sake of being different or to make a "fancy," non-straightforward play. That's the biggest "don't" we can recommend, actually. Only slow play if the situation suggests doing so represents the best avenue toward winning the biggest pot possible. In fact, you'll probably find in most cases the "don'ts" will prevail and it's going to be better to bet your sets and very strong hands postflop.

Ready to take a seat at the table? Put these hold'em tips into practice at WSOP Social Poker?.