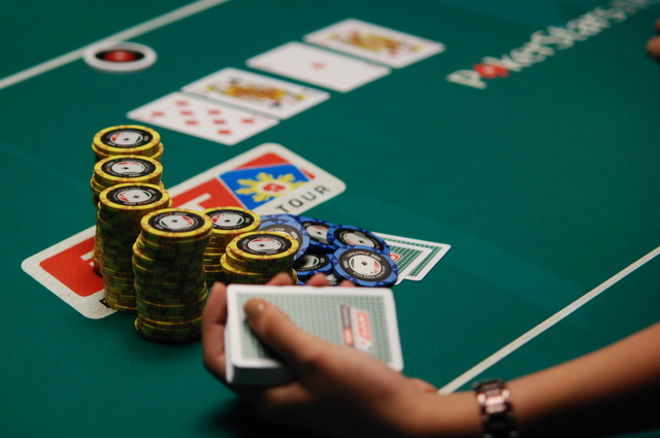 Continuing our series of no-limit hold'em tips, we turn to the topic of "set mining."

Set mining refers to the practice of playing a non-premium pocket pair passively preflop in the hopes of flopping three of a kind (a "set"). In other words, we're talking primarily about small pairs (

) and not queens, kings, or aces. And by "passively" we mean not taking the preflop initiative by raising, but rather such calling and trying to see a flop relatively cheaply.

The idea is similar to what we were discussing with regard to playing suited connectors, insofar as when trying to hit sets with these pocket pairs your goal is similarly to risk a little to win a lot. Flopping or turning a set with a pocket pair can be an especially powerful hand to have in no-limit hold'em, because the hand is relatively "hidden" and opponents rarely suspect you have something that strong.

in the big blind. A player raises from middle position, the button calls, and you call as well. The three of you then see a flop come

. This is a fantastic scenario for you, as one of your opponents very likely has made at least a pair of aces or kings and has little chance of improving enough to beat your set of fours. You're in an excellent spot to win a big pot.

But before we get too excited about flopping sets and winning big, let's talk a little about how likely such a circumstance is going to occur. In fact, when considering the fundamentals of set mining, it's worth committing to memory a few facts about getting pocket pairs and making sets to help you figure out whether or not it's going to be worth your while to attempt the set mining strategy.

How Often Do You Get a Pocket Pair?

First of all, as anyone who has played even a little no-limit hold'em probably already knows, pocket pairs don't come around all that often.

That means you're only likely to be considering the set mining strategy even less often than once every two orbits (since you won't be playing that way with queens, kings, or aces). Even so, the fact that you can win such big pots with these hands makes learning how to play them well worth the effort.

You Get a Pocket Pair... How Often Do You Make a Set?

Holding a pocket pair, then, how often can you expect to hit that set?

On the flop, there's about an 11.8% chance you'll flop at least a set (that includes full houses and quads, too). That means for set miners like you, the flop is going to be good for you only about once every eight times. If you can see the turn and/or river, your overall chances of eventually getting that set go up, but not by much.

The point here is to remember that making sets with pocket pairs doesn't happen all that often. Most of the time your small or medium pair is going to be unimproved. That's part of the reason why it can be so lucrative when you do make sets — it happens so infrequently, your opponents aren't likely to suspect it.

Before We Go Any Further... What Are the Stacks?

. Calling and set mining seems like a good idea, but there's one other question you need to answer before doing so.

What are the stacks?

Look at what the raiser has behind as well as what you have, and figure out what the "effective stacks" are in this situation. "Effective stacks" essentially refers to the smallest stack among the players involved in a hand, as that represents the most total chips in play (and at risk for that player).

Think about it. You'll only flop a set of fours once every eight times. But if you stack this player, you're only going to win a relatively small pot. You're calling a bet of 5,000 in the hopes of winning what's in the middle (8,000) plus another 20,000. That's less than six times the amount of your call.

Calling here in the hopes of flopping a set is clearly a bad play. It's about 7-to-1 against flopping a set, and even if things go perfectly for you — that is, you flop a set and stack the guy — you're risking 5,000 to win 28,000 total. That means your implied pot odds (including what you can potentially win besides what is already in the pot) are 5.6-to-1 — that's less than the odds against hitting your set. In this case, it would be better to raise with your pocket fours (or just fold them) than to call, as set mining is not a recommended strategy when the effective stacks are so shallow.

One rule of thumb to follow is to say the effective stacks must be at least 10 times the amount of the call to justify trying the set mining strategy. If you're going to call a raise of 5,000 here (and try set mining), you need to have the potential to win at least 50,000 chips. Some even recommend the stacks be even deeper, say 12 or 15 times the amount of the call (or even more).

Bottom line — don't try set mining if the stacks aren't deep enough to justify it. Before you make that call with your small pair, look at the stacks. If you're playing online poker, this is as easy as reading the numbers on the screen representing stack amounts. If playing live, take a second, eyeball the raiser's stack and make a count, and don't just call the raise if the effective stacks are too small for set mining.

Flopping a set is ideal, as that gives you all three postflop streets to try to build a big pot with your opponent(s). Turning one is nice, too, although typically it is not worth spending too much on the flop to see another community card when you really only have two outs. If you missed the flop, it's only a little over 4% the turn is going to give you your set, and if you miss the turn it's the same 4% or so chance the river brings you your set.

All of which means when pursuing the set mining strategy you're mostly looking to flop sets, and if you miss you're often going to be done with the hand unless you feel your pocket pair remains better than what your opponent(s) have and what the flop has brought. Be smart here — pocket tens might well be good on a

flop, but pocket fives probably aren't when the board reads

If you do happen to hit your set, think about your opponent's likely hands and also be smart about how you go about building a pot. If you have pocket sevens and the flop comes

, leading out with a bet probably isn't a good idea, since your preflop-raising opponent is likely to have missed that flop. Check and call and then perhaps start betting (or raising) on the turn. But if you have sevens and the board reads

, you don't necessarily have to slow play, especially if you think your opponent has a pair of aces or kings and might give you action.

Usually when flopping a set you do want to start betting and/or raising by the turn, as you don't want to miss this golden opportunity to win a big pot. Occasionally you might be in the very lucky spot of having an opponent playing aggressively when you've flopped a set, in which case you might well call down to the river before putting in a big bet or raise on fifth street.

But don't get too fancy and miss betting opportunities earlier in the hand with your sets! When set mining, the payoffs can be big, but not unless you do the postflop work to ensure you earn those rewards.

Ready to take a seat at the table? Put these hold'em tips into practice at partypoker.