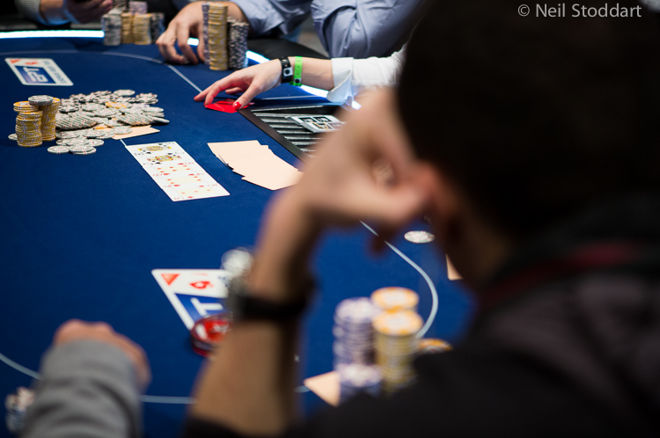 A certain, relatively small category of no-limit hold'em players never bluff. It's true. Whether because they are afraid to get caught or just have some sort of mental block preventing them from betting without a good hand, a certain, small percentage of players genuinely never bluff.

However, the majority of hold'em players do bluff. Most of these players understand that in order to win at no-limit hold'em, you can't simply wait for good hands and expect always to profit from them when they finally come around. Bluffing enables you to win hands without having the best cards. Bluffing also enables you to create an image that increases the chances you will get called when you are betting with the best hand.

Meanwhile discovering how to sniff out bluffs and make correct calls is also a desirable skill for no-limit hold'em players. In fact, figuring out the art of "bluff catching" might be one of the most challenging lessons to learn, especially for new players.

An Example Bluff... Viewed from Both Sides

Learning how to bluff well is not a simple task, but players generally get practice bluffing early on in their poker development — sometimes out of necessity.

Finding yourself deep in a postflop situation without a good hand, you realize a bluff is your only way of winning a hand and fire away. Sometimes it works, sometimes it doesn't, and by trial-and-error you learn what tends to work when bluffing and what does not.

Hopefully (eventually) you learn how to make your bluffs believable, with smart bet sizing and/or giving the appearance of logical "lines" or sequences of action leading up to your bluffs. The well-made bluff comes after having established credibility, usually through "telling" a believable "story" that starts with your image and extends through the actions in a particular hand.

Let's walk through an example.

Having shown yourself to be a tight-aggressive player, you decide to raise from the button with

and get a caller in the big blind.

You continue with a bet after the

flop and are called. Then after the

turn your opponent bets, you decide to raise with your big draws, and you get called again. The river is the

, and when your opponent checks you don't wait long before confidently firing a two-thirds pot-sized bet as a bluff.

It's a credible story. You appear very likely to have the strong hand you're representing, and not just the ace-high you actually have.

Now imagine yourself on the other side of this situation. Say you're the one in the big blind with

. You check-call the flop with second pair, then decide to lead on the turn only to get raised. You warily call that raise then check fifth street, then watch your opponent fire a big river bet.

Whether or not you are able to build up the nerve to call the bet, you should understand that holding

board is what is called a "bluff catcher." That's a hand which by definition (probably) can only beat a bluff.

— probably will check behind. Even players with stronger hands like two pair or a set might check, fearing the third diamond might have made you the flush you appeared to be chasing by calling the turn check-raise.

That leaves very strong hands (like a diamond flush) or bluffs (like busted straight or flush draws) as hands with which the player would bet. As you have a bluff catcher, you can call if you believe the bluff to be more likely than the very strong hand.

Looking at this example, we can isolate the necessary elements that need to be in place in order to call a bluff with such a "bluff catcher" hand:

First off, your opponent has to be capable of bluffing. If the player falls into that small category of never-bluffers, or even if the player has demonstrated extreme tightness and a seeming unwillingness to get out of line, you needn't bother talking yourself into making a thin call with a subpar hand. He's not firing that river with something your second pair, weak kicker can beat.

Typically you're going to target loose-aggressive players who are more than willing to bet and raise with subpar hands — or nothing at all — when calling with a bluff catcher.

Secondly, you need to consider carefully the amount of the bluff and whether your opponent's bet size makes it inviting to call.

If you have some history with the opponent and have recognized any patterns with bets or bluffs, use that information to help you evaluate the bet amount. If the player routinely bets big amounts (i.e., a large percentage of the pot) with strong hands, a big bet will be less inviting to call, but if the player likes to make smallish value bets and then bets big, that might indicate a bluff.

If you estimate your opponent is bluffing more than once every 2.5 times this situation arises, a call would be profitable from a mathetmatical point of view. (See "10 Hold'em Tips: Pot Odds Basics" for more on this topic.)

Finally, you can be almost 100% sure your opponent is bluffing, but you have to have a hand that can actually beat a bluff in order to call.

, even if you know your opponent is bluffing you can't reasonably call. (You could bluff raise in such a spot, however.)

Bottom line — if the "story" your opponent is trying to tell isn't adding up and you suspect a bluff, and the situation meets all of the criteria for bluff catching, consider making that call.

Be smart, though, and not overly paranoid that everyone is bluffing you on those rivers. The fact is, whether playing live or online poker, most players bluff very little. With many opponents you're going to find their bets and raises — especially the big ones — often are not bluffs but made for value.

Ready to take a seat at the table? Put these hold'em tips into practice at 888poker.