Hand Review: Limp-Raising Against the Chip Leader in a €50K 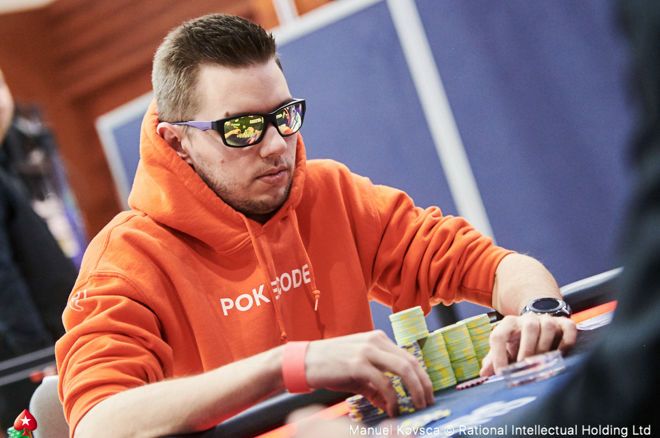 I recently returned home from a trip covering European Poker Tour Prague. While observing some of the high roller action there, I was reminded of an interesting hand during my last trip to Prague, one that took place in the €50,000 High Roller. I've already covered one bizarre hand from that event that saw two players opt not to bluff with total rags on the river. The following one was similarly intriguing.

It took place during four-handed play at 20,000/40,000/40,000 and involved the top two remaining stacks, Andras Nemeth and Matthias Eibinger (pictured above), at the time playing about 2.6 million effective.

Action folded to the small blind, where Eibinger completed. From the big blind Nemeth raised it to 140,000 and Eibinger responded with a limp-raise to 560,000. Nemeth called and they took in a

Eibinger used a time bank and then bet 575,000. Nemeth called, bringing the

turn. Eibinger shoved for 1,505,000. Nemeth used most of his allotted 30 seconds then called with

. It was no good as Eibinger held

, and that hand held up on the

river to give him the chip lead.

In the endgame stages of a tournament, it's never fun to be second in chips and have the chip leader on your left, but that's exactly where Eibinger found himself when four-handed in this nosebleed event. Nemeth had been running away with things earlier, but while the gap had closed between him and the field, he was still applying plenty of pressure.

Since the two players were so deep, Eibinger had a nice opportunity when locked in a battle of the blinds. Rather than go for the standard raise from the small blind, he opted to limp in and spring a trap with a limp-raise.

It's a strong play and helps him slow down Nemeth from raising all of his limps, thereby enabling Eibinger to protect some of his weaker holdings. Additionally, it allows Eibinger to get more money into the pot when he very likely has the best hand and cuts down on the stack-to-pot ratio. Eibinger wants that, because the deeper the two are, the more Nemeth can use his position to make life tough for Eibinger on later streets.

When Eibinger gets a dreamy flop of

, he opts to proceed with a fairly sizable continuation bet. His range is very strong in this spot after this limp-raise with the second stack against the big stack, so I think he should always be betting this texture, and a largish bet like this makes sense since he has to protect his hand from the many overcards that could arrive on the turn.

With overcards and backdoor draws, it also makes sense for Nemeth to call and see what Eibinger does on the turn.

There, Eibinger shoves the rest in after the board double-pairs. He should nearly always have the best hand here since Nemeth didn't reraise him preflop or on the flop, and neither player should have many deuces or fives in his hand. Shoving seems safe and ideal with this hand.

Question is, what bluffs will Eibinger show up with? That's what Nemeth has to figure out as he's on the clock and has to decide whether or not to make a hero call. It's hard to see Eibinger having too many except maybe big diamond flush draws.

It's always hard to get into the minds of the highest-level players, but Nemeth may be expecting some ace-high draws to check, having showdown value. He beats the other draws, stuff like

, which is definitely incentivized to semi-bluff and try to fold out ace-high hands. He also has blockers for aces and jacks, two of the value hands that Eibinger might show up with, so perhaps that's his rationale for making the big call.

In any case, I really liked the line Eibinger took in this hand. While it's always worrisome to come at the chip leader when you're in second and looking at huge money jumps, it's a necessary part of tournament poker if you want to go for the win. Eibinger used a preflop limp-raise to maximize the money in the pot, and he barreled off for max value and a huge double into the chip lead. That helped propel Eibinger to a win worth €653,000.

Slotomania Hacks and Cheats for Unlimited Free Coins in 2020

How and Why to Count Combinations in Poker