Handling the Ups and Downs of Low Stakes Poker 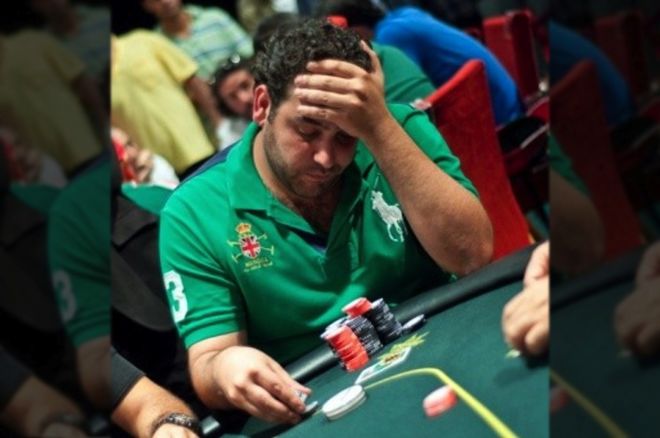 One of the hardest things to deal with at the lower stakes is the "variance" or constant ups and downs. It can be frustrating to keep taking one step forward, then immediately take one step back when the stakes are so low.

The fact is, the games these days aren't always the walk in the park they were several years ago, even at very low stakes. So this turbulence is a reality for a lot of players today.

What Goes Up Must Come Down

It is important to put both your good runs and your bad runs at the poker tables into proper perspective. Neither are normal.

We tend to think we are owed something in this game, especially when we run good and our aces "finally hold," for example. No, actually, when your aces hold a lot that's outside of the norm as well. They should lose sometimes, roughly around 20% of the time.

It is important to remember you will have stretches of both good variance and bad variance in poker, and that this will never end. When you run really good this will eventually be corrected with a bad run of cards. And, of course, the opposite is true as well.

It is only over these time periods and sample sizes that variance finally starts to sort itself out. That means the biggest key to dealing with the constant ups and downs of the game is to realize they are only an illusion. The odds will even out and you will run "normal" over the long term.

Have More Ups Than Downs

What a lot of poker players fail to realize is that you actually have control over your own variance. The higher your win rate, the fewer downswings or bad stretches you will experience.

I am known for having played millions of hands of online poker at the lowest stakes with crazy win rates of 20 BB/100 (big blinds per 100 hands) and even 30 BB/100. Because my win rates were so high at these stakes and because my volume was also so high, I almost never had a losing day.

It goes without saying this isn't going to happen if you play any kind of decent stakes online where the win rates are a lot lower. Also, if you play live, then it is impossible to play enough hands in a day to bust through any downswing like this.

But hopefully the point is clear — contrary to popular belief, yes, you do have control over your own variance. There are three main ways to make this happen.

As mentioned, the frequency of ups and downs you endure in this game is directly tied to your win rate. I studied these low stakes games like crazy and either discovered or created the best strategies to beat them.

I also made use of learning tools such as books, articles, training sites, forums, tracking programs, and so on. Basically I became the best player in the game (at these levels) whenever I sat down, and therefore I had an edge over everybody. Essentially, if you improve your relative skill level, then you will have a lot more ups than downs.

2. Get to the Long Run Faster

Another way I decreased the frequency of ups and downs I had was by simply playing more than everybody else. I would play more tables at once and longer than anyone else.

This allowed me to put in so many hands that I made it to the long run much faster than most people. This actually helped me improve my skill level as well, because I got to see the same scenarios over and over again and make adjustments.

There is a reason most of the best poker players almost always seem to be at the poker tables. This is because experience is a very real thing in this game. The more hands you play, the more you will learn and improve.

3. Play Against Players Who are Considerably Worse Than You

The final way to decrease your variance and have more ups than downs is to play against weak competition — and by this I mean preferably much weaker opponents.

The crazy win rates I managed to achieve at the lowest stakes online are not possible in middle-stakes or high-stakes games, because the majority of the players there are much more competent and make far fewer mistakes.

For me personally, if there isn't at least one person in the game who is considerably worse than me, then I am not going to be playing in that game. It doesn't matter what the stakes are.

The bottom line is skill and experience can only take you so far. At the end of the day, poker is a game played by people against other people. If you don't have a big edge over at least some of your competition, then there is no way you are going to achieve a big win rate.

Dealing with the constant ups and downs at the lower limits can be frustrating to say the least. The money isn't very big and it can sometimes feel like you are getting nowhere.

It is important, however, to understand both the good runs and the bad runs aren't "real" in the end, or at least should be considered in a more realistic context. The long term math will sort itself out as it should.

Also, you do have control over your own variance. You do not have to be a slave to the constant ups and downs. People who are more skilled, put in more volume, and play against weaker opponents have a lot more ups than downs.

The bottom line is poker is a game with constant swings and it has to be this way or else the weaker players would not keep coming back. Learn to take these swings in stride, but also always work on ways to improve your relative edge over your opponents and then you will profit more.