How *Not* to Stay Fit at the World Series of Poker 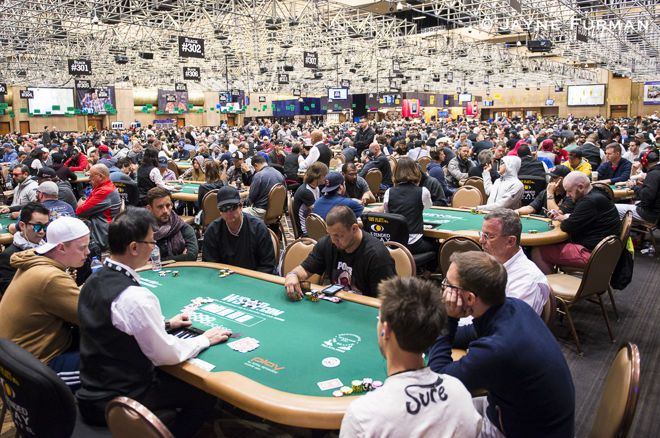 The World Series of Poker is a punishing schedule of poker like no other. Seven weeks, 89 official events, and hours upon hours of sedentary behaviour will take their toll on the mind and body, but they won't keep you fit.

Nor will any of these five bad habits that you might fall into as easily as a trap from a clever opponent at the felt. Avoid them!

There are a number of ways you can contribute to poor fitness and one of the easiest is to eat poorly. Badly-timed meals, inadequate sustenance, and eating the wrong things are dangers to avoid when in Las Vegas during World Series time.

We've already offered some suggestions for how to change your eating habits for the better. Lesson one is to eat exactly what you need — not too much, not too little, but just enough to keep you fulfilled. Stay on top of your levels and you won't fall short during a level at the table.

2. Failing to get adequate, consistent sleep

If there's a place that can mess with your sleep schedule, it's Las Vegas. With wall-to-wall slot machines, lights, entertainment, restaurants, and nightclubs, Sin City has earned its name by reputation — it will tempt you to stay awake at all costs.

If you're struggling to get yourself in a good recovery routine, then check out our handy guide on how best to get the rest you need at the WSOP.

If there's one thing to remember, it's that when playing at the WSOP your body might not tell you that you're tired in the same way as it would at home. You could be suffering from a change of time zone or jetlag, and many casinos pump oxygen into the main areas to keep punters alert when they should be thinking about sleep. As you try not to misread opponents at the tables, don't also misread your body's signs when it is telling you to get some rest.

Be disciplined about when you need to sleep and stick to whatever routine you discover works best for you.

Failing to get adequate, consistent sleep

The effects of alcohol, both short-term and long-term, can be very damaging to your fitness. Your body will feel sluggish upon waking, your memory and responses will be impacted, and if you drink to excess liver damage can be right around the corner. Limiting how much alcohol you have will give you more impetus to go out and get fit during the World Series.

If you do go out and drink, or even partake during the days as a recreational player, try to avoid drinks that bloat you, like beer or cider. The long queue for the restroom aside, it'll make you feel uncomfortable at the table and put you off your game. Take a few days off drinking completely and you'll feel fresher at the felt.

It's really easy when spending every day at the WSOP to get yourself into a cycle of constantly taking in stimulants in an effort to stay alert (perhaps to counteract the alcoholic relaxants you have been consuming). From coffee to energy drinks, stimulating yourself with caffeine is highly risky, and can contribute to an increased heart rate. Not only that, but it only works as a short-term way to lessen the effects of tiredness.

Bouncing from one energy drink or coffee to the next also plays into your mentality. If you're conscious that you are beholden to a stimulant to maintain your mental and physical energy, then you're losing a vital edge — self-discipline. By restraining your constant need to up energy stores, you're declaring to yourself that you're ready for anything and can deal with the variance of life as well as that of poker.

There's nothing worse than feeling exhausted after having done no exercise all day. Poker can seriously make you feel out of shape, unconditioned, and run down. If you're in your seat all day, you're going to be riddled with tension, fatigue, and at times even feel extra demotivated to do anything physical.

Getting fit isn't only about running up mountains, doing yoga, or the like. Simply walking around the Rio during breaks can be beneficial. So, too, can taking an extra long walk in the morning (say when heading to the tournament room) or using your dinner break to get some fresh air. There are a huge number of ways you can avoid sitting down all of the time and thus perhaps feeling down during the WSOP.

Football Slots to Play Ahead of the Champions League Final

Turbo-Charge Your Deposits with a New Bonus Package