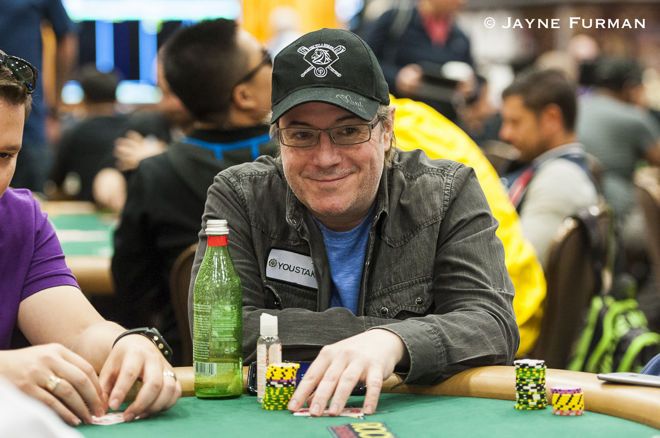 This article will look at a recent hand from Live at the Bike in which 2006 World Series of Poker Main Event winner Jamie Gold managed to fold top two pair on what seemed like an unscary board. Most likely, a key reason for Gold folding were several strong-hand tells his opponent gave off.

If you're curious why I have so much to say about this topic, I've written a trilogy of books on poker tells and I have a video series. To learn more about me, check out the bio at the bottom of the article.

Here's the hand as it played out on LATB:

Here are what I see as the most interesting behaviors in the hand, in chronological order.

We'll start by examining DJ Melo's behavior on the turn. He's flopped top set in a multi-way pot and then he check-raises.

Something to note about DJ here and throughout the rest of the hand — his physical and verbal looseness. I don't know if he's often this loose (I've only seen him in this one hand), but I would bet a good amount of money if we compared this spot with some of his bluff spots, you'd see a lot more loose movements in this one.

Look at the way he throws in chips on his flop raise (1:45) and, later, on his turn bet. Also look at the way he moves around and smiles, and how he plays with his chips very playfully and loosely throughout.

At the 2:30 mark, Gold calls with top two pair, saying, "I just call," and this gets a very loose reaction from DJ. He smiles, laughs, and says, "You have aces again?"

Look at how genuine and relaxed his smile seems. Again, I would wager good money that if we were to compare this spot to this player's bluff spots, we might see some smiles, but you wouldn't see smiles that were this large, frequent, and dynamic (fake smiles are often pasted on and static, while genuine smiles tend to be loose and move around).

Beware the bettor with the furrowed brow.

On the turn, starting at about the 3:00 mark, DJ suddenly gets a serious expression on his face. The important thing here is the furrowed brow, which he holds for quite a while as he considers before betting.

Bluffers have a natural inclination not to put on any well-understood indications of concern or worry, and the furrowed brow is one such well-known display. Bluffers don't want to communicate, even in small ways, that they have a decision, so such expressions are instinctually avoided. By contrast, players with strong hands have an incentive to make you think they have a decision.

By the way, this is something many human behavior "experts" often get wrong when trying to apply general behavioral concepts to poker and other competitive situations. Signs of worry or anxiety, including self-soothing behaviors, are just hardly ever going to be seen from someone making a large bluff, whereas that kind of behavior is common from anxious people in non-competitive scenarios, such as interrogations or interviews, where deception by all participants is not assumed.

Stacking up chips as if to bet and then "changing mind"

At 3:20, DJ eventually starts to stack up chips. But he does something that's a quite reliable pattern here — he starts to stack his chips purposefully as if ready to bet, and then, a few seconds later, puts them back in a single stack and goes back to looking like he's not sure what he'll do.

Same as for facial expressions of concern or worry, someone making a big bluff will generally not want to communicate with their gestures "I'm not sure what to do here." (This is assuming they do actually end up betting; if this is followed by a check, then the pattern no longer applies.) Whereas players with very strong hands will have an incentive to communicate concern and uncertainty.

At 3:40, DJ starts to check out his opponent's chip stacks, as if very uncertain how much they're playing. Once he gets clear on Gold's stack, he asks his other opponent, "How much you playing over there?" and seeks confirmation that there are no big chips behind, "only white chips."

In general, bluffers will want to seem confident about the situation, and that includes not wanting to seem concerned about opponent's chip stacks. A bluffer won't want his opponents potentially to read weakness into the fact that his bet might be dependent on how much his opponents are playing.

When DJ asks, "No big chips behind?" this is especially likely to indicate strength, because a bluffer, even if uncertain, would generally want to avoid seeming worried about what an opponent had. The fundamental strategy of how to play a hand and size bets is often influenced by opponent stack sizes, but the point here is that, even that being said, a bluffer generally doesn't want to be perceived, rightly or wrongly, as being concerned about opponents' stacks.

In general, bluffers would rather seek to find out visually and non-ostentatiously how much an opponent has, because they don't want accidentally to convey concern.

Of course, it's conceivable this player, if bluffing, might be legitimately uncertain about his opponents' stacks. There's another factor here, though — he asks both players, including the player directly beside him. It is very unlikely he wouldn't be able just to look at Gold's stack and figure out what he was playing, which makes this behavior especially likely to be meaningful and reliable as a strong-hand tell.

Also note, again, the very loose physical behavior as this player moves around as he asks his opponents how much they have.

This is one of the most reliable tells in this hand. For just a moment, after asking about the chip stacks, DJ gets a pained, stretched-out lip expression on his face. It's the kind of expression that accompanies saying something like, "Man, would you believe this crappy situation?"

Continuing a similar theme here, it's just very unlikely that someone with a bluff or a vulnerable made hand would want to communicate being upset in this way.

Gold is watching him intently at this moment and, immediately after, Gold laughs. It's clear that Gold knows what this likely means, and it's possible he's been picking up some of the other stuff before this, too.

Some people might ask: "If this kind of upset-expressions-mean-strength tell is so widely known, wouldn't this be a good deceptive act to put on if someone were bluffing?" Actually, it would, assuming you could know for certain how your opponent, or opponents, would interpret your behavior. But in practice, most people don't know how their opponents will interpret their behavior, which is the main reason for why complex reverse tells are so rare. Bluffers, in general, just don't want to draw attention to themselves.

Jamie Gold, after some thought, folds his top two pair.

This might seem like an impressive fold but, if you are somewhat proficient at reading some basic tells, this would be a pretty standard fold for an experienced live player.

Tells are most useful when they're clustered together like this. One pattern on its own might not be actionable, but when you have several behaviors pointing to the same likely meaning, you can sometimes be very confident acting on a read, which is certainly the case here.

Also worth emphasizing is the fact that some of these tells are very short-lived. For example, the stretched-lips grimace lasts only a split second, and yet, in my opinion, it is the most reliable tell in this bunch. This is a good reminder that it can be valuable to keep an eye on your opponents, as you never know when you might get a quick but very meaningful bit of info.

Zachary Elwood is the author of the Reading Poker Tells trilogy of books. He's served as a consultant for two World Series of Poker Main Event final table players. He also has a video series, available at www.readingpokertells.video.

Bet or Check With Pair Plus Flush Draw in a Multi-Way Pot?