More Bluffing 101: 8 Questions to Ask Before Firing the Third Barrel 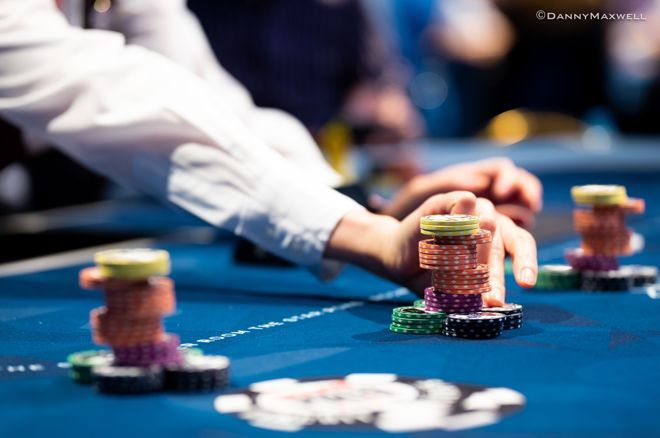 It's the river. You are in the cutoff seat. You have absolutely nothing. After having bet the previous two streets, you're thinking about bluffing on the river, also known as firing a third barrel. How do you decide whether you should?

Unfortunately, otherwise solid players all too frequently lose money because they fail to bet unless they are nearly certain their bet on the river will be successful. But you don't need to be certain that a bluff will work for it to be justified. In fact, if you are completely on the fence about your third barrel being successful, it probably makes sense to fire away.

Here's an example of how a three-barrel bluffing opportunity might present itself.

and only one player on whom you have position calls. You each have about $300 behind as the flop comes

. You see this as an excellent opportunity for firing a second barrel, as you've picked up both a draw to the nut flush an inside straight draw for the nut straight, as well as the ace being an overcard to any pair your opponent might be holding. You bet $75, and opponent calls again.

, and your opponent checks. The effective stacks are now roughly $195. You have missed all of your draws. Do you fire again or check it down?

What follows are eight questions you can ask to help decide whether or not to fire that third barrel.

1. Does your hand have showdown value?

That is, is there a chance that your hand might win without betting? In the above example there's little chance. You don't have a pair, and thus very little showdown value. But what if you had something stronger? If, for example, you had a pair of kings in the above example, you'd have a fairly good chance of having the better hand. It would have showdown value, and if you both checked the river, you might well win.

If that's the case, then betting as a bluff would not be as valuable a move, as you could win without betting. (The question of whether your kings might warrant a value bet on the river is a discussion for another day.) In the example above, the lack of showdown value would be one reason you might fire a third barrel on the river.

2. Is your opponent's stack size big enough for him to fold?

If your opponent's stack size is tiny, then he's probably going to call your bet on the river even if he has a very weak hand, figuring that he's "pot committed.” This would make your attempt at a bluff futile.

How small is too small of a stack size for you to three-barrel? It's impossible to be precise, as it's very player-dependent. But as a rule of thumb, anything less than 50 percent of the pot will increase the likelihood of a call (assuming you bet the size of his stack).

In the example above, your opponent's stack is more than half the size of the pot, which would typically indicate that a large bluff might work.

3. What is your opponent's likely range?

You've had three streets to evaluate the likely range of your opponent. What range of hands was he likely to be playing based on his preflop action? Can you narrow it further based on his action on the flop and turn? Based on all of that, what range do you put him on now?

4. What is your opponent's general style of play?

Your opponent's likely range will depend a lot on your impression of him as a player. Is he extremely loose preflop? His initial range for calling your raise could be extremely broad. On the other hand, if he is very tight he might not call without at least a medium pair or two big cards.

If he is a calling station who can't seem to release his hand once he calls preflop, it's unlikely that he will fold to a bet on the river unless he has absolutely nothing. Similarly, if he's the type of player who just can't stand losing in a showdown, you might bluff him out of even a fairly strong hand on the river.

5. What is your likely image in your opponent's mind?

To figure out whether a bet on the river makes sense you also must be able to understand how your opponent views you. What will he conclude about how tight, aggressive, passive or tricky you are? Remember that it doesn't matter what type of player you know yourself to be, only how your opponent is likely to view you.

6. What range of hands is your opponent likely to put you on?

Based on all of the above, what is your opponent likely to think you have. If he's a newbie or otherwise poor player, he may not be thinking much beyond the absolute strength of his own hand. Put simply, he might be thinking “I have a pair of aces, and I can't fold aces.”

On the other hand, most players in public poker rooms will at least consider what you're likely to have before they make their decision to call or fold. If you estimate that your betting has indicated a range of hands that is likely to be ahead of the range of hands you are crediting to your opponent, be more inclined to bet on the river. In other words, think about the "story" that your betting has been telling up to that point, and whether a final large bet from you is consistent with that story. If it is, then be more inclined to fire the third barrel.

Blockers are cards in your hand that would give your opponent a very strong hand if he held them, but since you have them, he cannot. Having these blockers can be a reason, though not a major reason, why you might attempt to triple barrel.

In the above case, you have one of the four jacks your opponent might have for a straight (if he held J-T). By holding one of those jacks, you have diminished the chances by 25 percent that he somehow has J-T, giving you a slightly greater chance that your bluff will be successful.

8. What are the chances your bluff will be successful?

Your analysis of the answers to the first seven questions is unlikely to leave you completely certain of success. But lack of certainty is not a good reason to withhold a bet on the river. Instead, you will need to estimate the level of certainty you have and compare it to the pot odds of your bet. When you've put all of this together, then you can go about the job of estimating — at least roughly — the chance that your bluff will be successful.

Assuming your bet to be roughly half the size of the pot, then you must succeed only a third of the time to break even. If, for example, you are on the fence (that is, 50 percent sure) about whether your bet will be successful, then you are losing money by not betting.

Bluffing 101: Deciding Whether to Fire a Second Barrel on the Turn