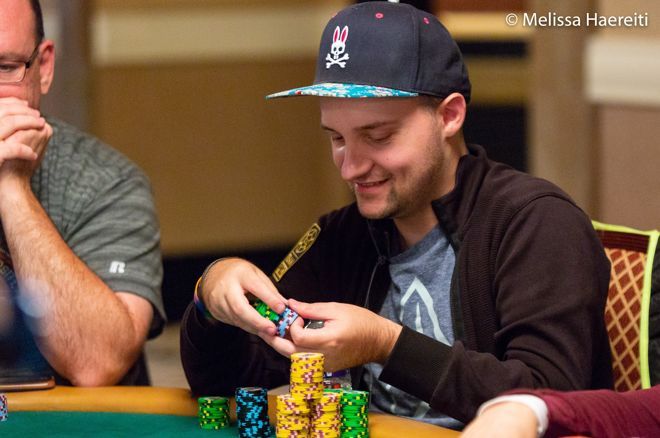 The last article I wrote analyzing a hand played by Ryan LaPlante was a popular one — and for good reason. Laplante always delivers insight that doesn't come to many of us at first glance. Another example of this was on display in a hand he played during a Twitch stream he did right before Christmas on his channel at www.twitch.tv/pr0tentialmn.

. He and the villain in the big blind had essentially the same stack size of 24 big blinds while the small blind had over 100 BBs. Laplante opened his hand for a minimum raise and the big blind defended.

. With 2,600 in the middle, the big blind checked, LaPlante fired a continuation bet of 650, and his opponent called. The

on the turn would be enough to trigger most of us to give up, but after the big blind checked again, Laplante bet 2,200 into the pot of 3,900. As he did he described the reasons informing his plan to shove most rivers.

"Their range has very few top pair or better hands besides the occasional A-7 or J-7 that didn't shove the flop, or A-3 that didn't shove preflop. These two-pair hands and sets are rare to a large degree because many people shove A-x and pocket pairs preflop in this situation," explains Laplante.

"When stacks are short, the preflop raiser has a massive range advantage on the big blind defender on these boards, even more so than usual. Sure, some players will have a few A-x hands here, but they are far outweighed by their J-x, 7-x, and gutshot straight draws. Essentially, their range is capped and weak. When that's the case, all the chips are going in. Good luck us."

I decided to put this idea to the test using FlopZilla. Here is the range villain just calls the flop with if he retains half of the A-7-offsuit and J-7-offsuit combos in order to strengthen his turn range:

As LaPlante suggests, only 27 percent of this range is top pair or better. If villain only continues with these combos plus an additional 5 percent that picked up a flush draw, the bet will get a fold 68 percent of the time, which is almost double the 36 percent needed to break even given that he bet 2,200 into a pot of 3,900.

If villain decides to shove his two-pair combos when the second spade hits and just call the turn with J-x, A-x, and flush draws, he would bring the following range into the river. Let's say the river is

to make things better for villain:

LaPlante would have roughly a pot-sized shove left for the river. This bet would need to work 50 percent of the time to break even. If villain planned to fold all his unimproved J-x combos, the bet would work 46 percent of the time. If he ever convinced himself that his A-2 or A-4 was no good, then the river bet would turn a profit as well. Things get even worse for him in cases where the spade draw misses.

As both the math and LaPlante's experience show, the preflop aggressor has a near insurmountable range advantage on the big blind defender on ace-high boards in late position when stacks are short. In this hand, we learned that we can take advantage of this fact with an almost zero equity hand. If we happen to have any sort of draw ourselves, the situation gets even better.

This is not a spot I've noticed in the past, but I will certainly be on the lookout for it in the future.