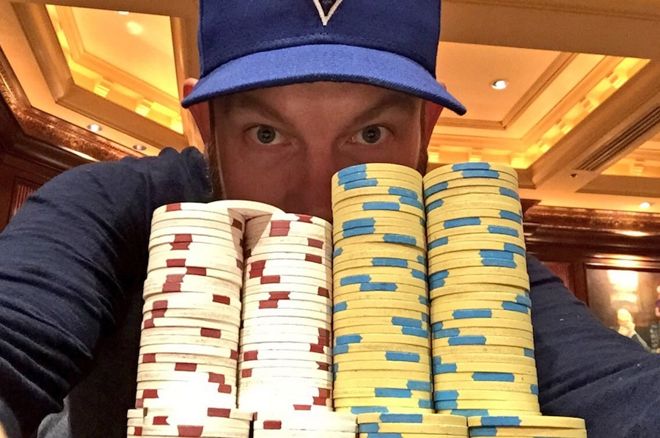 Texas hold'em, Omaha, stud, 2-7 triple draw — these are just a few of the poker variants to which many of us have grown accustomed, but why stop with those?

If you've been listening to the PokerNews Podcast this summer, you know that while the 2016 World Series of Poker has been going on we've been mixing it up on a regular basis in our $4/$8 mixed game, including inventing brand new games from time to time. After all, all poker games were invented at some point, right?

I'd like to introduce one of these invented games in this article, a game we call "No-Limit 2-7 Single Draw 1 Up."

If you have played a 10-game rotation — or if you've eagerly explored all the games on PokerStars — you've come across no-limit 2-7 single draw.

This game that was once considered for the WSOP Main Event is played with a mandatory ante, and a small and a big blind. Every player gets dealt five cards face down, and the positions and order of play work the same as in no-limit hold'em. When played at the WSOP, in the predraw betting round the first player to enter the pot must do so by opening with a raise (and cannot just "limp" or call).

After the first round of betting there's one round of drawing, after which there's a final round of betting. In total there are just two betting rounds and one option to draw cards.

With regards to the hand rankings in this game, this is a "lowball" game in which you're trying to make the lowest possible five-card hand. Aces are always considered high, and straights and flushes count against you. That means the best possible hand is

, referred to as "a wheel" in this game.

While the average winning hand at showdown is a jack-low (that is, a jack being the highest among five unpaired cards), you're going to want to draw to better hands in order to make your postdraw betting decisions easier.

Position is of utmost importance in this game, as having position gives you the closing action in both the drawing and betting rounds. Deciding not to draw will heavily rely on how many cards your opponent draws. Not drawing any additional cards or "standing pat" is an option to choose before value betting or bluffing. If your bluffing after "standing pat," that's called "snowing."

When it comes to offering strategy advice for 2-7 no-limit single draw, I'm certainly not an expert. But here are a few gems to keep in mind when trying this game out:

Aside from having one of your five cards dealt to you face up, the rules of the game exactly follow those for the regular version NL 2-7 draw. Note: if you happen to want to discard your up card, your new card will be dealt face up back to you again.

This game is a lot of fun for a plethora of reasons, the first being that you can see a part of the hand that your opponent's playing. If your opponent has a

up, for example, you know that his best possible hand is going to be a 10-low, unless he decides to break that hand and discard his

On top of that, as you scan the up cards around the table, you'll be able to see cards that are already dead. That will be information you can use to make it easier to gauge the outs available for your own draw.

You can even go multi-level with this, using a strong up card to bluff with, forcing your opponent to reconsider his actions. You'd be surprised how much just revealing that one card can affect decision-making and strategy. The dynamics can get pretty crazy.

Players who prefer no-limit hold'em often enjoy NL 2-7 draw because of the "big bet" aspect of the game. Meanwhile, for those who prefer stud games, adding the up card brings a stud-like element to "No-Limit 2-7 Single Draw 1 Up." It ends up being a hybrid of several different games, even though the change to regular NL 2-7 draw isn't complicated at all and doesn't take long to explain or learn.

While this game will probably never get spread in any tournament, it's a lot of fun to try out with friends in your local home game.