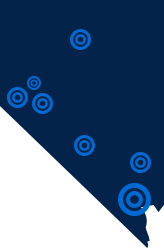 If you are asking yourself in which States can you play poker online, Nevada is the answer. Nevada has been the gambling capital of the world since legalization of gambling in 1931. As it should, The Silver State has set an example to all of the other 50 states and was the first to reintroduce legislated online poker.

Since the end of April 2013 when online poker in Nevada was launched the numbers were pretty steady. Recent reports show that the number of players and revenues have been increasing while the spike in the ratings is expected during May-July due to World Series of Poker that attracts tens of thousands of players each year.

Currently Nevada has two online poker rooms that are associated with two of the 86 casinos in the state.

Since online poker has become available in Nevada, two more states has been made online gambling legal – Delaware and New Jersey.

Who can play?
According to U.S. gambling laws anyone who is at least 21 years old is eligible to play. Even though players do not have to be residents of the state they have to be physically present in Nevada in order to play. You can register an account at anytime from anywhere in the world and play when you visit Nevada.
Making a deposit
In order to play online poker on WSOP.com you need to register an account and download the software. Then, you can make a deposit using credit and debit cards or via a bank transfer.
Playing without a deposit
If you prefer, you do not have to make a deposit to play. WSOP.com not only offers play-money games but also freeroll tournaments. There is no entry cost but there are real money prizes to be won.
Withdrawal of funds
To withdraw your funds you need to go to WSOP.com lobby, and use the cashier to send the money via a bank transfer. Currently you cannot withdraw funds to your credit or debit cards.
Do I need to deposit money to play?
No, you do not need to deposit money to play. WSOP.com offers several Freeroll tournaments which are free to play and can win you real money!
Is online poker legal?
As of April 2013 Nevada has 100% legalized online poker. With WSOP.com your funds are always safe and you are free to deposit/withdraw at any moment you like.
Recommended poker room - WSOP.com
WSOP.com in a worldwide brand trusted around the globe. In addition to world famous live events played and watched by millions of people worldwide they have now entered online poker world. Within a week in Nevada WSOP.com have become the most popular poker room due to the integrity of the company, quality of the software and their exclusive games providing a unique opportunity to win seats at their own events around U.S., Europe and Australia. If you have decided to play online poker in Nevada, why go for anything less than the best?