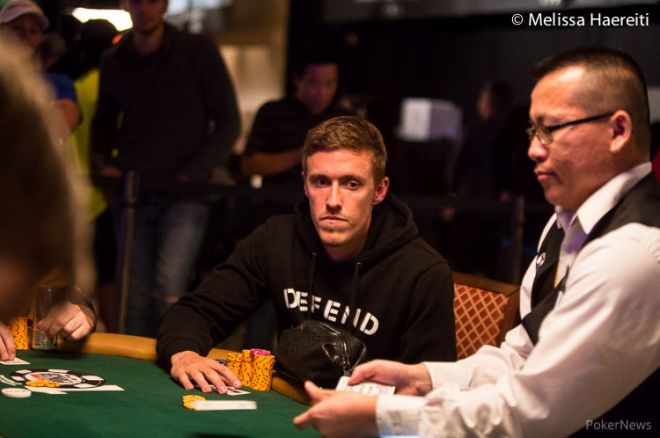 Three weeks ago, it seemed all but certain that football star Max Kruse would be playing for Germany at the 2014 World Cup in Brazil. Kruse, the 26-year-old striker and second-leading scorer for Borussia Mönchengladbach in the German football league, was expected to serve as a reserve for Germany in its attempt at a fourth World Cup title.

However, Kruse's World Cup dreams were dashed late last month when he was inexplicably left off the roster. Rumors swirled that Kruse had violated team rules at a hotel during an exhibition trip in England in December, angering national coach Jogi Löw enough to leave him off the team. Kruse denied those rumors, conceding that the decision was based on skills rather than the off-the-field gossip.

Crushing a blow as it was, Kruse's exclusion from the squad did allow him free time to compete on a different kind of green surface this summer. Last week, the footballer hopped a plane to Sin City and met up with several German poker-playing friends at the World Series of Poker.

If he couldn't play for a World Cup at the Estádio Maracanã in Rio de Janeiro, he wanted to compete for a gold bracelet at the Rio All-Suite Hotel & Casino in Las Vegas.

Incredibly, Kruse will get his chance on Wednesday.

Kruse is one of six players who will return for the final day of play in Event #36: $1,500 2-7 Draw Lowball. He outlasted a pro-heavy field of 241 that included the likes of Phil Hellmuth, Antonio Esfandiari, Erik Seidel, Mike Matusow and Scott Seiver, as well as dozens of pros who have been trying years to win a bracelet of their own.

And how's this for a needle: The footballer learned how to play 2-7 draw lowball during a 30-minute crash course from friend George Danzer while watching Germany play against Portugal last week.

"We were getting ready for the 2-7 event and Max liked the game so we just gave him a few hints," Danzer told PokerNews' Frank Op de Woerd on Tuesday. "He seems to have learned really fast!"

Danzer offered five key tips to Kruse before the tournament began, and the novice put one of them to use during a key moment late Tuesday night. With seven players remaining, short stack Scott Bohlman raised all in from under the gun for about 36,000. Action folded to Kruse in the big blind and he called, quickly standing up and declaring he was standing pat. Kruse stared down Bohlman from across the table for about a minute before Bohlman let out a big sigh and also decided to stand pat.

, which barely had the pro's

beat. Kruse pumped his fist into the air and ran to the rail to celebrate with Danzer, who had told his friend before the tournament that a ten or better in 2-7 is a "good hand."

No stranger to the spotlight, Kruse will be featured on the WSOP.com live stream on Wednesday as he plays for WSOP glory and an $89,483 top prize.

Kruse told PokerNews on Tuesday that he's sad about not being in Brazil with the national team. But while it might not have the same significance as the FIFA World Cup, a World Series of Poker bracelet will go a long way toward easing some of his pain.

Will Kruse be able to claim gold inside the Amazon Room on Wednesday? Be sure to follow his progress at the PokerNews Live Reporting blog beginning at 1 p.m. PST.