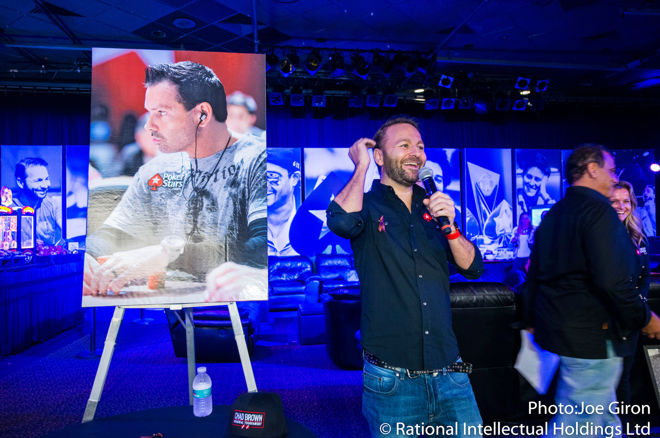 Poker player, ambassador and good friend to more than just a few people in the poker community, Chad Brown died in 2014 following a three-year battle with cancer.

Thursday night in Atlantic City, he was remembered.

The 3rd Annual Chad Brown Memorial Poker Tournament benefiting the TJ Martell Foundation was held at Resorts Casino Hotel as a part of the first-ever PokerStars Festival New Jersey. Team PokerStars Pro Daniel Negreanu hosted the festivities, which included a $200 buy-in and unlimited $100 re-entries with 50 percent of the prize pool going to the foundation.

In an interview with PokerNews prior to the event, Negreanu shared his best memories of Brown.

"Chad was pretty much friends with everybody," Negreanu said. "He just had that way of being. You never saw him get pissed off, you never saw him throw cards, he was always smiling and happy grinding the tour. The biggest memory I have of him was after he got sick and the prognosis was no good, it's very easy for a lot of people to be very angry and bitter, but he just sucked it up and kept on going. The last six months of his life, he lived life to the fullest. He was still playing the tournaments, trying to get better at poker and that kind of thing.

What I take away from that is that we're all eventually dying, we're all going to die, so why not start living now, instead of waiting for this or that to pan out? All you really have is this moment and he lived it. Chad lived his life that way, especially in the last year.

Negreanu said that his loss affected the way he plays now.

"What I take away from that is that we're all eventually dying, we're all going to die, so why not start living now, instead of waiting for this or that to pan out? All you really have is this moment and he lived it. Chad lived his life that way, especially in the last year."

As far as the poker record books are concerned, Brown will be remembered as a player who cashed 38 times at the World Series of Poker, including two runner-up finishes. He cashed in numerous World Poker Tour and European Poker Tour events, earning more than $3.6 million on the circuit and capturing the 2006 Bluff Magazine Poker Player of the Year award. A former baseball prospect turned budding actor, Brown said at the time that “winning Player of the Year is like an actor winning an Oscar.”

Brown hosted a number of different poker TV shows and was a true ambassador for the game throughout his career. Negreanu said he was pleased to be a part of the event and making sure Brown is remembered for more than just his stats, but also for what he did for the growth of the game.

"I think it's really nice that Chad Brown won't be forgotten," he said. "He touched a lot of people in the poker community by just the friend that he was. I think it's really great that we have something in his name that is his legacy."

Brown was diagnosed with liposarcoma, a rare form of cancer, in 2011. He played poker almost until the end, and weeks before his death, he was awarded an honorary WSOP bracelet.

Before he took ill, Brown was always the picture of physical health and Negreanu said he will certainly be remembered for that as well.

"Chad was a role model for a lot of people," he said. "Even in his 40s, he was in great shape. Even his posture at the table was good. He took fitness very seriously and his diet as well. He was really ahead of his time in that way, because when he came up in poker, that wasn't the norm. The norm was donuts, cigarettes and whiskey. He broke the mold in that way. He was a pro, but he was also physically conscious, and spiritually conscious and focused on positivity rather than whatever bad beat he just he took."

Close to 100 players turned up for the start of the event Thursday, including a host of poker pros and celebrities like 'Boston' Rob Mariano and Tyson Apostol of Survivor fame and Team PokerStars Pros Jason Somerville, Jason Mercier and Vanessa Selbst. The chips were flying right from the jump with several players ready to re-enter right away, all in the name of a good cause.

Resorts also pledged $3,500 to the foundation as the event kicked off.

By the time it was all said and done, the event drew 87 entries and 214 reentries, raising $19,400 for the TJ Martell Foundation.

Throwback Thursday: Qui Nguyen Prior to the WSOP Final Table