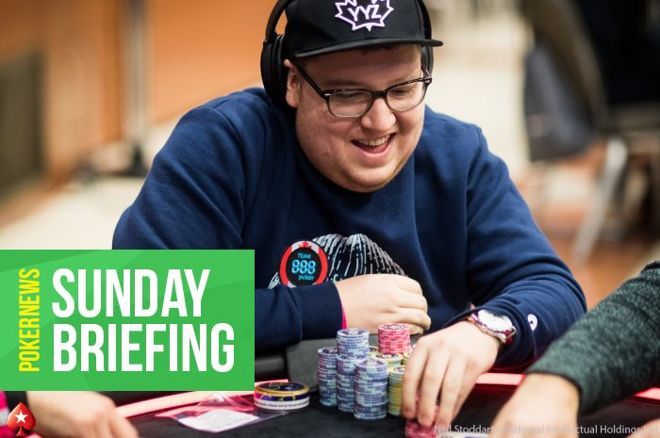 888poker's popular poker streamer Parker “tonkaaaa” Talbot secured the largest online score of his career to date on Jan. 20 when he chopped the PokerStars Sunday Million for more than $124,000 with the United Kingdom’s “PokerDave476”.

A guarantee-busting field of 5,837 took to the PokerStars virtual felt for this weekend’s Sunday Million, ensuring $1,167,400 was distributed among the top 1,052 finishers. Those reaching the money places netted at least $335 while those who navigated their way to the nine-handed final table banked at least $9,271.

Austria’s “icebearr” picked up the latter when they busted in ninth-place, locking up a five-figure score for the remaining eight players. Canadian “rmullen” saw their tournament end in eighth-place, a finish worth $13,211. They were followed to the rail by Sech “T0X16-” Zehn, Enrico “WhaTisL0v3” Camosci, and “BuddyAces2” to leave only four players in the hunt for the title.

Fourth-place and a cool $54,472 went to Brazil’s Luan “Pseudo Fruto” Felipe before “Rus-us8” of Russia crashed out in third-place for a bankroll-boosting $77,622 prize. This left Talbot and PokerDave476 to play heads-up for the title and the not so small matter of a $47,000 pay jump.

Second-place was meant to pay $110,609 but a deal between Talbot and PokerDave476 saw both players now receive $124,114 with $20,000 left for the eventual champion. Unfortunately for Talbot, PokerDave476 got their hands on the additional $20,000 after eliminating Talbot in second-place, but it was still a remarkable result for Talbot who now has more than $4.2 million in online cashes.

The final table of this weekend’s PokerStars High Roller Club: $2,100 Sunday HR was one of the toughest ever assembled and any of the nine players would have been a worthy champion.

As it happens, it was Italian high stakes guru Dario “Secret_M0d3” Sammartino who took down the tournament after a heads-up chop with Swedish superstars Johannes “Greenstone25” Korsar. Sammartino netted $48,431 as part of the deal with Korsar securing a $45,435 payday.

Before Sammartino took down yet another tournament, Team PokerStars pro Igor “IgorKurganov” Kurganov finished in ninth-place for a $6,530 score. Kurganov was joined as a spectator first by Nick “caecilius” Petrangelo then by Patrick “pads1161” Leonard, Talal “raidalot” Shakerchi, Mikita “fish2013” Badyakovskiy and his girlfriend and fellow Team PokerStars pro Liv “Liv Boeree” Boreee!

Boeree’s exit was followed by the elimination of “Futti18” of Russia which left Korsar and Sammartino to strike a deal for the lion’s share of the prize pool.

After finishing sixth in the PokerStars High Roller Club: $2,100 Sunday HR, Patrick “Patrick_Leonard” Leonard almost went all the way in the partypoker Sunday Super High Roller but ran out of steam at the last minute, busting in third-place for an impressive $22,was

Only the final table of eight were paid in this tournament with both “DeanMalenko” and Team partypoker’s Roberto “WelshWizard” Romanello collecting $7,362 for the eighth and seventh-place finishes.

Steve “eet_smakelijk” O’Dwyer, who won $896,610 when he took down a $25,500 Super High Roller at partypoker in September, finished sixth in this tournament for $8,525 with the remaining players each walking away with a five-figure prize.

Canada’s “chadi6969” finished in fifth-place for $10,850 with Sweden’s “MOTHERSMATTERS” claiming the $13,950 fourth-place prize. Third-place we know went to Leonard, leaving “RedDwarf9” and “pockjack0” to lock horns heads-up for the title.

The victory eventually went to the latter; pockjack0 collectED $50,375 for their victory, resigning RedDwarf9 to the $34,100 consolation prize.

Niklas “Drulitooo” Astedt was the first Swede to bust at the final table, crashing out in eighth-place for a $3,705 addition to his bankroll. Three other players then busted before another Swede, “haddoken” fell in fourth-place for $9,975.

Croatian pro “SouhftfW” busted in third-place for $14,250 to leave a pair of Swedish grinders heads-up for the title. The Swedish duo decided to strike a deal for the remaining prize pool, a deal that saw “BuyThaPot” officially finish in second-place for $22,093 and “CASHEEEGAMEEE” be crowned champion for $25,786.

“Texxxas_” is the player credited with becoming the tournament’s champion, their first-place finish banking them $17,592. The runner-up was “robbiish1” who scooped a $16,257 prize.

Romanovsky was joined on the sidelines by a pair of Argentinians in “lasochobi” and “ultraviol3nt” who walked away with $5,700 and $8,250 resepctively. Thailand’s “GoinInDry” was the third-place finisher and banked $11,000.

There aren’t too many online poker players from the United Arab Emirates but the 888poker $20,000 Sunday Challenge was taken down by “cottroni14” who calls the UAE home.

First-place this week was worth $5,697, a decent return on a $109 investment. Cottroni14 found themself heads-up against “CheckRaise55” of Germany and got their hands on the lion’s share of the prize pool when they eliminated the German in second-place.

The top seven finishers walked away with a four-figure score. The two aforementioned players were joined in winning more than $1,000 by “888topPair”, “vezunchiksss”, “ALLCasH90”, “AAdannAA”, and “LucySagara", the latter taking home $3,113.