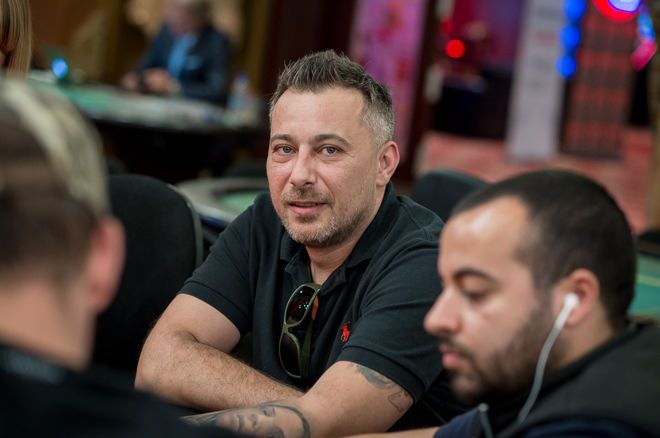 The penultimate day of the 2019 PokerNews Cup Kulata €550 Main Event witnessed a field of two dozen players whittled down to a final table of eight players at Finix Casino.

The day began with the 24 players all guaranteed a payout of €1,080 with their eyes on making it to the final day for a chance at the €25,080 top prize. Despite the average stack of 73 big blinds and long 40-minute blind levels, the second day lasted just 5 1/2 hours.

Day 1c chip leader Panagiotis Panagiotidis, who began Day 2 just one big blind behind the overall starting day chip leader, Rosen Simeonov, will enter the final day with the chip lead with a big stack of 1,586,000. His stack was closer to 2 million in chips after his ace-king held strong against the ace-queen held by Symeon Alexandridis in one of the biggest pots of the day. That hand meant the end of Alexanandridis in tenth place and also kicked off the start of the unofficial final table of nine.

It didn't take long for an elimination to happen thanks to some fireworks that led to Simeonov tripling up with jacks against the eights held by Savvas Baltiras and the ace-queen held by Panagiotis. Afterward, Baltiras was left with crumbs and dusted off the rest when his ace-three couldn't get there against the ace-nine held by PokerNews Cup Kulata High Roller winner Dimitrios Michailidis.