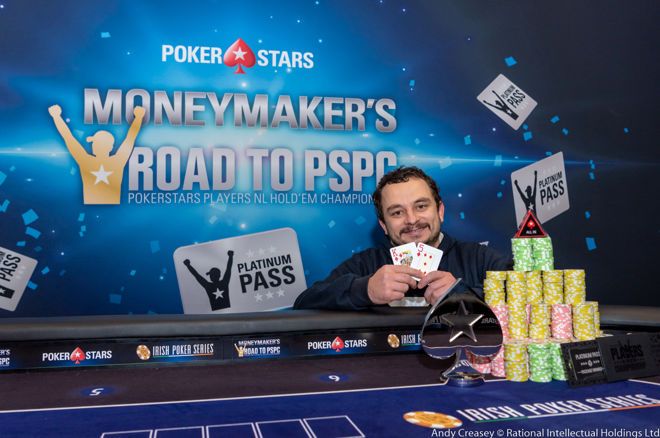 Victor Antoci has become the latest recipient of Platinum Pass to the 2020 PokerStars Players Championship in Barcelona, after taking down the €175 Moneymaker's Road to PSPC 2020 Dublin Main Event.

Antoci topped an 809-player field and defeated a final table featuring none other than Chris Moneymaker himself to win €12,770 after a three-way deal with runner-up Tomas Flanagan and Sia Browne. The Platinum Pass itself is valued at approximately $30,000 and includes a €22,500 buy-in to the 2020 PSPC.

Sunday began with 196 players remaining including not only Chris Moneymaker himself, but top Irish poker players such as Paul Leckey and Dara O'Kearney. 103 places were paid, and it was another top Irish player in the shape of Andy Black who burst the bubble when his pocket nines failed to hold against the ace-queen of Victor Antoci.

Moneymaker was one of the players who made it to the money, sitting strong on around 800,000, but he was some way behind chip leaders Robert Csire, Day 1b chip leader Thomas Gallagher and eventually Sia Browne who emerged as a strong contender with almost two million in chips just before the dinner break.

There were just 41 players remaining when the tournament returned from dinner break, with Browne in the lead. By the time the tournament was down to two tables, she held double second place's chips and moved further ahead with the eliminations of Bob Tait, Robert Turlej and Vytautas Aganauskas.

O'Kearney and Sergejus Jakovlevas were the last two players to miss out on the final table with Browne now sitting on 7.3 million chips ahead of Tomas Flanagan and Moneymaker himself.

Glenn Miller and Peter Grey were the first eliminations at the final table before Moneymaker joined them. He flopped top pair against Browne, who called with her overpair to send the PokerStars Ambassador to the rail in seventh place.

Antoci would trim Browne's stack, but she still held over 11 million in chips as Colm Hanlon, Shawn Morales and Kieran O'Riordan were eliminated in quick succession. This left a bloated dynamic three-handed that dragged on until the three players agreed to the following deal.

Short stack Antoci would soon double through Flanagan as the chip stacks leveled out, and he'd double through long-time chip leader Browne to dash her hopes of winning a Platinum Pass as she was eliminated in third place, ending the three-handed stalemate.

This pivotal hand came when Browne bluff-shoved river with ace-high and Antoci called with two pair two double up. A short while later he sent Browne to the rail and suddenly held a commanding chip lead heads-up. Flanagan did manage to secure two quick doubles, but Antoci was patient and eventually sealed victory shortly before 3 am local time.

This concludes the PokerNews coverage of Moneymaker's Road to PSPC 2020 Dublin. Be sure to join us at the next stop on the Moneymaker Tour for more live updates!