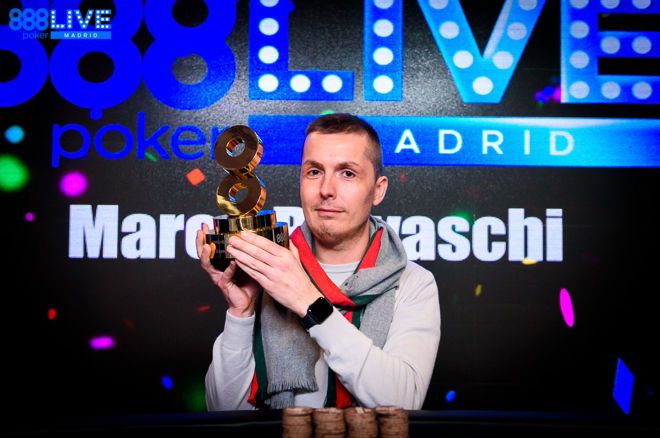 The latest winner on the popular 888poker LIVE circuit has been crowned and Italy's Marco Biavaschi emerged triumphant, lifting the trophy after defeating Daniyar Aubakirov heads-up to come out on top of a field of 1,067 entries and take home the lion's share of the €800,000 prize pool.

For his victory in the 2020 888poker LIVE Madrid €888 Main Event, the Italian scored by far his biggest payday of €150,000 on the live poker circuit thus far in the first major poker tournament held at the Casino Gran Via Madrid right in the city centre after winning his entry in a €100 live satellite.

Once the final hand was over, it took a few seconds for the emotions to flow as Biavaschi had celebrated too early a few minutes prior when Aubakirov was on the brink of elimination and rivered a straight to double. It might still take a while for reality to kick in and grasp how big the achievement is, and there is more to come later this year in Las Vegas as the Italian also receives a package for the 2020 World Series of Poker Main Event, courtesy of 888poker.

Biavaschi was not phased by the battle against seasoned pros such as former WSOP Main Event finalist Fernando Pons and Claudio Di Giacomo, nor up-and-coming local players such as Ignacio Lopez De Maturana, Marco D'Amico, and David Gonzalez Delgado. When the final table was reached, Biavaschi took the risks when needed and dominated the short-lived heads-up duel after a gruelling 15h day.

For runner-up Aubakirov, who dominated the final action as the most aggressive player, it was the second-biggest result of his poker career after claiming the title at WPT Amsterdam back in 2017, and many of the other finalists boosted their bankrolls significantly after the deep run in one of Spain's biggest live poker events of the year.

The XL Blizzard Series is Back!

After the bubble had burst one hour before bagging and tagging with the field subsequently being cut into half, the early all-in showdowns kept coming at the same rapid pace as the previous night and barely any minute passed without any "all in and call" announcement by one of the dealers.

China's Lin Ruida ran incredibly hot to send several opponents to the rail and also take over the vocal headlines in the tournament area while notables such as Meir Avigal, Federico Anselmi, Aaron Rivero Daly, Manuel Lopez and Alessandro Borsa all bowed out early on. One of the surprise early casualties was Alvaro Puchol, who headed into the final day second in chips and yet had to settle for 45th place.

Down to the final three tables, the deep run of Bruce Fishman, who qualified for the event after defeating more than 5,600 opponents in an online freeroll to claim the sole package up for grabs, came to an end. The Brit turned his visit to Madrid into a score of €4,300 and will certainly have several poker-related stories to tell for family and friends back home.

Down to the final two tables, all the spotlight was still on Fernando Pons who was aiming to keep the title on home soil. However, his run came to an end on the final table bubble when he called a shove by David Gonzalez Delgado with pocket sixes and lost the flip against ace-queen. Lin Ruida and Claudio Di Giacomo also narrowly missed out on the final redraw of the night.

It was already past midnight when the last nine hopefuls returned to their seats to play down to a champion and that turned out to be a tedious affair of nearly six hours. Eventual runner-up Aubakirov was the one to take the mosts risks and had to recover from setbacks several times before he established a firm stronghold over the other contenders.

Aubakirov and Biavaschi took turns to send their opponents to the rail including Ran Shahar, start-of-day chip leader Marco D'Amico, Pablo Paez, and Delgado. The heads-up duel for the title after that lasted just over an hour. Aubakirov quickly pulled further ahead but frustration set in when Biavaschi scooped several bigger pots to turn the tides around. Having escaped from elimination once, Aubakirov got short again and was unable to stop the hot run of Biavaschi, who follows into the footsteps of former Italian winners such as Luigi Shehadeh and Gabriele Rossi.

The 888poker LIVE circuit is already preparing for the next stop in Bucharest at the end of March and online satellites will be available shortly. That wraps up the PokerNews coverage here in Madrid, but updates from further international poker events are just around the corner.