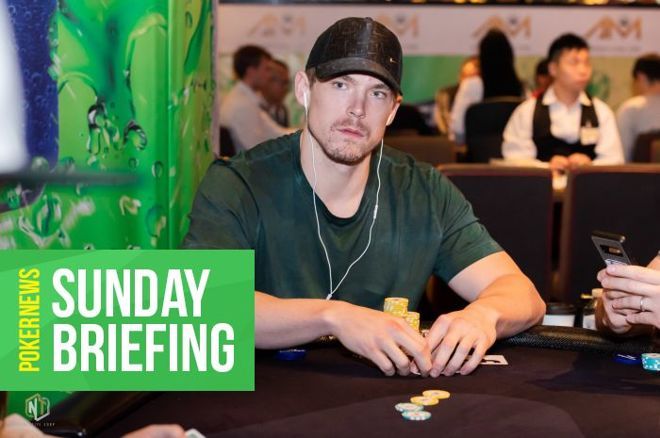 April 26 was another massive day for online poker tournament players with guarantees being blown out of the water. The best players in the world go hunting when the prize pools are juicy and some of these elite stars came home with plenty of spoils.

Alex Foxen topped a ridiculously tough final table in the $1 million guaranteed Big Game at partypoker. Some 256 players made it or bought in to the final phase to compete for a share of the $1,174,170 prize pool.

Bruno Volkmann busted first and was joined on the rail by Benjamin Rolle and Linus Loeliger, who was also busy winning the Poker Masters Main Event for almost $1 million.

Nick Petrangelo was the next to fall before Daniil Lukin and Jordi Urlings fell by the wayside to leave Foxen heads-up against Brazil’s Yuri Dzivielevski. Foxen got the job done and received $239,413, resigning the runner-up to a $173,777 consolation prize.

East defeated “The12MUL8” heads-up for the title, leaving the runner-up to bank $129,938, the only other six-figure prize on offer.

Team partypoker’s Day “daykotoviezy” Kotoviezy ran out of steam in fifth-place and collected $54,278 for her troubles. Shout out also to “Tiger97” who finished in third for an $83,384 prize.

The GGMasters hit its $500,000 guarantee for the first time since GGPoker increased it to half a million dollars. It was hit when 3,662 players bought in and created a $508,356 prize pool!

Lithuania’s “Vladiator13” was the main beneficiary of this juicy pot as they were the last player standing. First place weighed in at a massive $72,299. The Lithuanian defeated Hong Kong’s “Luaot” heads-up to secure the title, leaving the runner-up to get their hands on a still impressive $50,735.

The champion also secured more than 1,400 points for the Player of the Year race. GGPoker is still updating the latest table but we believe Vladiator13 should soar straight into second-place. The race is heating up!

$100M is Gtd for the WSOP Super Circuit Online

Everyone at the nine-handed final table won at least $16,384, but the final three players each secured six-figure paydays.

“fcma1111” of Cyprus finished in third and padded their bankroll with $112,174. This left “waransan” of Germany and “Trashdawg” of Albania to fight it out for the title. That title is now in Albania with Trashdawg improving their lifetime winnings by $213,001. The runner-up walked away with $154,574 for their efforts.

Mustapha “lasagnaaammm” Kanit has been in scintillating form of late and continued his purple patch with victory in the $1,050 Sunday Warm-Up at PokerStars. Kanit came out on top of a 224-strong crowd, doing so with his third bullet, to walk away with $39,025 after a heads-up deal with Russian star Victor “papan9_p$” Ustimov. The Russian netted $37,901.

Earlier at the final table, Francisco “Tomatee” Benitez and “jwall888” busted before Simon “C.Darwin2” Mattsson crashed out in seventh-place. “T-Macha” of the UK won the first five-figure prize, namely $11,068 then Jon “apestyles” Van Fleet dusted off his stack in fifth-place, a finish worth $14,567.

The $2,100 Sunday High Roller usually attracts a star-studded crowd and this weekend’s edition didn’t disappoint. Seventh of the world’s best players fought it out for a share of the $140,000 prize pool.

Nobody won more than “WATnlos” who emerged victoriously with $37,78 reasons to be cheerful. The Austrian defeated Panama’s “calitox” heads-up for the title, leaving the Panamanian to collect $28,725.

The final table housed several household names. Simon “C.Darwin2” Mattsson was the eighth-place finisher, a result worth $5,543. Russia’s “Futti18” busted next, with Preben “prebz” Stokkan exiting in fifth for $12,619.

Over at 888poker, “carmen.1957” won the $20,000 Sunday Whale for the second consecutive week. The British player triumphed over 86 opponents in this week’s tournament to pad their bankroll with $7,190.

888poker ambassador Martin “MJacobson” Jacobson reached the final table but his stay there was short-lived. The former WSOP Main Event champion busted in eighth-place for a $978 score.

Peter “kiskutya23” Traply was also present and correct at the final table, although he tripped up in sixth place for a $1,370 prize.

Check out the XL Inferno schedule

“MartonasBOOM” was the only other player to net five-figures. The Swede finished third for $10,375.

Learn about The Dragon satellites here