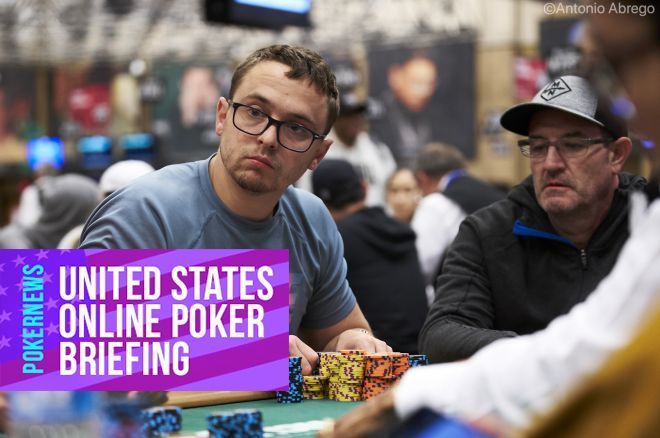 It was another big Sunday online at regulated online poker rooms in the United States.

The BorgataPoker.com/partypoker/PlayMGM Sunday $35K GTD was the biggest tournament at partypoker US over the weekend with 268 entrants (162 entries + 106 re-entries) generating a $53,600 prize pool.

Brady "NoRecourse" Osterman notched his second five-figure online score in less than a month after winning the event for $10,720 after more than 10 1/2 hours of play. This is also Osterman's second-biggest online score in his lifetime according to PocketFives where it is reported he has amassed nearly $700,000 in online tournament cashes.

Next week will be another big one at the partypoker US Network with Day 2 of the $100,000 guaranteed phased event on Sunday, April 26. The tournament features a $109 buy-in with Day 1s running throughout the week.

The PokerStars NJ Sunday Special featured a larger than normal $350 buy-in and a $50,000 guarantee with the NJSCOOP in town.

David "coles93" Coleman shipped the event for $15,331 after more than 6 1/2 hours of play. Coleman, who has amassed more than $2.8 million in online cashes, was ranked in 95th place in the world and in third place in the United States entering the tournament according to PocketFives.

PokerStars NJ is hosting the NJSCOOP, featuring more than $1.2 million in guarantees across 96 events on April 11-27.

The PASCOOP ended with a bang on Sunday at PokerStars PA with many big events including the biggest of the festival in the $300 Main Event featuring a massive $200,000.

The tournament was a two-day affair and attracted 845 entries and 470 re-entries to generate a massive $368,200 prize pool.

You can read about this event here from beginning to end with PokerNews providing extensive live coverage of the event.

The Spring Online Championships features 100 big events with more than $4 million in guaranteed prizes from April 1 to May 3 at WSOP.com in New Jersey, Nevada, and Delaware.

The buy-in two weeks ago was increased to $320 but last Sunday was back down to the $215 the tournament normally features when there is no online festival taking place.

The event was once again a huge success with 705 entries and 389 re-entries generating a huge $218,800 prize pool for more than double the guarantee. A total of 160 players managed to go home with at least a min-cash valued at $372.

The guarantee was smashed by double after 649 entrants generated a $109,100 prize pool after rebuys and add-ons were taken into consideration. A total of 125 players cashed for at least a min-cash of $185.

The WSOP.com Weekly Sunday witnessed its guarantee increasing from $30,000 to $50,000 last Sunday while keeping the $500 buy-in the same.

The guarantee could have been even higher and still met with 106 entries and 79 re-entries creating an $86,395 prize pool.