Estimating Fold Equity to Determine Whether to Take an Aggressive Line 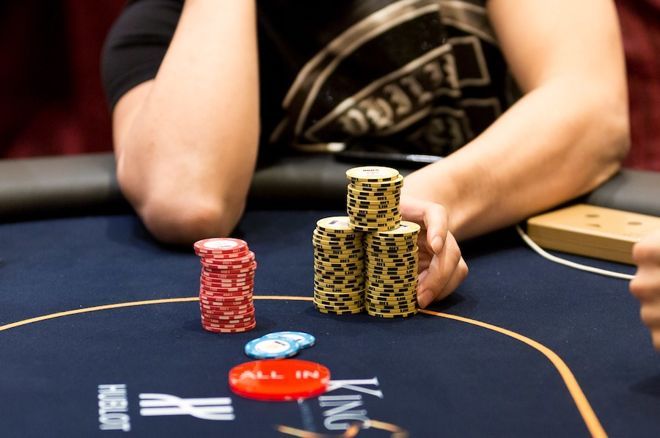 The term "fold equity" refers to the amount of additional equity you have in a pot as represented by the percentage of the time your bet or raise will cause your opponent to fold.

Fold equity necessarily has to be estimated, not calculated exactly. Even so, it is especially useful to consider when you're weighing the relative value of following an aggressive betting line as opposed to a passive line.

Consider the following situation. You are playing a $2/$5 no-limit hold'em cash game. You've gotten heads up against a fairly tight and aggressive opponent. You're in early position (UTG+1), and he's on the button.

and the board is

. To this point with your flush draw you have check-called his flop bet and now the action is on you. A few other players had been in the hand preflop and on the flop, but they've since folded and it's just the two of you on the turn. You have an effective stack of $500 and the pot is roughly $300.

You don't know precisely what your opponent has, but from his aggression and his style of play in general, you figure his range to include T-T, J-J, Q-Q, A-K, K-Q, K-J, and maybe K-T. You don't think it includes any 9-x hands. Maybe his range also includes A-Q, your exact hand.

In any event, you're thinking that you'll check again with your flush draw, and he'll probably continue and bet the turn. You're expecting a bet that would not be small enough to justify calling strictly based on the pot odds. You figure that it would be $150 or so (i.e., half-pot). You expect his bet to be in that range, and you plan to check and call it if it is.

The call wouldn't be justified if you just thought about the pot odds. But when you also considered the additional money you might win on the river (i.e., the additional implied odds), you figure that it would be worth calling.

But then you think about another way you might play the hand. What if you took an aggressive line and bet the hand, making a donk bet of $150 right here? To figure out whether this line would be profitable, you'd have to determine two separate possibilities.

First, you'd have to calculate the probability that you'd improve to a flush on the river. That's simple enough, an immutable mathematical certainty. You've probably memorized the percentage. Very roughly it's about 20 percent — 4-to-1 against you.

But I said you have to determine two possibilities. By being the aggressor on the turn, you have added in the possibility that you could win the pot of $300 by having him fold to your $150 bet. That will happen a certain percentage of the time as well, and you have to add that in to the equation to see if your bet makes sense. That percentage of the time you get your opponent to fold — necessarily just an estimate — is your "fold equity."

When added to the percentage of the time you will outdraw your opponent, you have your full chances of winning, and that should determine whether your aggression makes sense.

In this instance, you are adding to your 20 percent probability of improving on the river the probability that your bet will win you the hand by getting your opponent to fold on the turn. If the percentage of the pot you'll win by drawing and by betting exceed the cost of your bet, then the bet makes sense.

This equation involves both some math and some speculation on your part. We've already looked at the math — the chance that you'll draw your flush. You give yourself 20 percent of $450 as your equity of the pot by drawing the winning hand. That's $90. You'll need another $60+ worth of equity for your turn bet of $150 to make sense, or in the parlance of poker, for it to have a positive EV (expected value).

As a final note, recognize that there are other possibilities that this deliberately simplified analysis doesn't consider. The size of your opponent's likely bet is invented and may be wrong. You could make a differently sized bet if you wanted — $100 or $200 perhaps. That might change your estimation of your fold equity.

Also, your opponent might not call or fold to your bet — he might raise. Your estimation of his range might be wrong. There's a possibility that he has a set and might draw a hand that beats your flush. All possible, to be sure.

But poker is not a game of utter certainty. It is a game of incomplete information. Part of the challenge is to filter out the matters of relatively minute possibility so you can do a useful, if imprecise analysis, and then act accordingly.