When Less Than the Nuts Won't Do: Having a 'No-Calling Range' 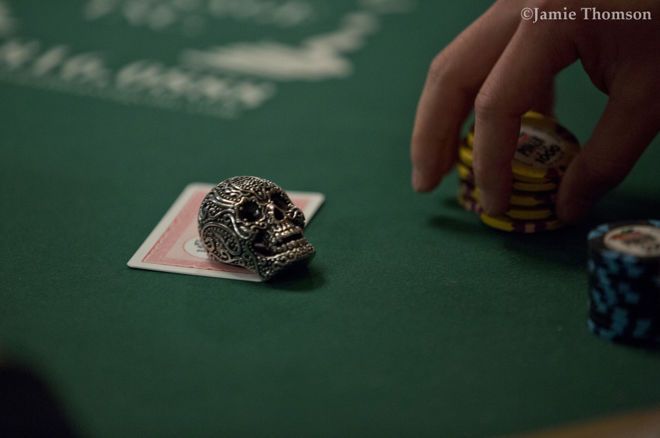 Sometimes in no-limit hold'em, you just can't call. This situation arises most often in tournaments, especially in satellites, but theoretically could happen in final table situations as well.

Even in cash games there can be spots where, because of an all-in and a multi-way pot, there is a player who has put money in the middle who has zero bluffs. Then we also need to have zero bluff-catchers, but even if we do because of card removal we still might actually never be calling.

In some spots like this, we either call with nutted hands or fold. Keep this in mind as we go through the following hand — a real one, recently played online at the 100NL ($0.50/$1) six-max tables.

Five-Way Flop, Three to the River

Action began with the under-the-gun player raising to $2.33. The next one to act folded, but everyone else called. That made it five ways (!) to the

Action checked around to the cutoff who bet $4.43, and three players called — everyone except the preflop raiser, in fact. The turn was the

, putting a second flush draw on the board.

This time both blinds and the cutoff checked, then the button bet $14. The small blind folded, but the big blind and cutoff both called, pushing the pot just over $71.

, completing a possible backdoor flush. Meanwhile both K-J and J-8 have made a straight.

Let's review. Five players saw the flop, four saw the turn, and three saw the river. When we think about whether it is likely for someone to have a flush or a straight, we should not think about how often or seldom one of these three remaining players can. We need to consider the fourth player as well.

At this point on this

board, the big blind, who has been pretty quiet this entire time, open shoved all in for $80 (a little more than the pot). The cutoff player then decided not just to call this bet, but raised — not all in to $180, but a min-raise to $160.

The button — who, you'll remember, had been the aggressor on the turn — was left with a decision.

In spots like this, the fact of the matter is someone is likely to have a flush. The cutoff is going to have a very hard time holding a hand that is both better than the big blind's and worse than the button's. The cutoff is committed to showdown against the big blind in a huge pot, so he needs a straight or a flush. Even strong sets here are precarious because of the particular action that has unfolded.

But with that river raise the cutoff is saying he wants to play for more. Say the cutoff has

and thinks he is ahead of the big blind's shoving range, but wants to fold out a chop from the button (or even a small flush). Is he really getting the price to do so here? It would be a strong strong play to make, one that would basically require an utterly perfect read on the whole convoluted situation. How often is the button going to have exactly a small flush that might fold?

Now when it comes to the button, there is no more room to rebluff the cutoff who has just put in $160 with just $20 left behind. So holding the naked

no longer has value for the button. If the button has

without another diamond, he cannot have a hand that beats a single hand in either of his opponents' ranges.

But if he does not have the

, he would be right to assume one of his opponents does.

In other words, the only way to put money in this pot now for the button is when he has the nuts — i.e.,

. The only chance for the button to be good with a low flush would seem to be if the big blind is making a sicko bluff with

and the cutoff is getting even crazier with

In other words, when the button has the nuts, he can call, and when he doesn't, he should fold. The times either player has the nuts or the

in their hand, that means the button will have "no-calling range."

But is that not exploitable? Not really. In spots like this, when you need to hold the nuts to be certain your opponent cannot call, you cannot punish your opponent exploitably. You only get dealt the nuts so often and no matter how hard you pray to the poker gods, you cannot increase that frequency.

The button did call on this occasion, and showed

for a small flush. He was crushed, of course, by the cutoff's

. Meanwhile the big blind went broke with a hand that should have been checked on the river (if not, folded on the turn) —

If we read back through the action again, it should be clear to the button that he is almost never good — certainly not often enough to pay $160 for the bad news.