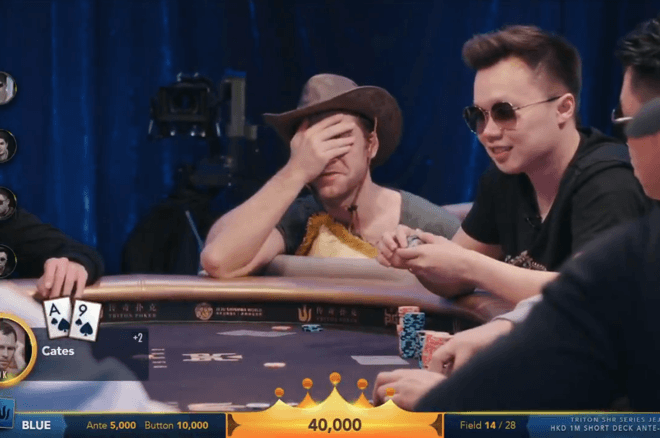 Any poker player who has put in some time at the online tables has committed the dreaded "misclick." Your brain and fingers try to do one thing but your cursor finds a different button. If you're not familiar with playing online, just ask any person you know who is — they'll tell you all about it.

But what about live? It may not be called a misclick, but most people can think of a moment when they made a costly error while playing live — a "live misclick," as some of us like to call it.

On this April Fools' Day, we bring you some examples of a live mistake that many a poker player has committed or observed in their time at the felt — the accidental all-in.

Last month, Daniel "Jungleman" Cates was playing the Triton Super High Roller Poker Series in Jeju, South Korea. During one of the events, a short-stacked Cates got fixated on a side bet that involved tossing a chip into a specific spot across the felt. But as the Jungleman should know, when it's your turn to act, your actions speak for themselves.

His action resulted in an accidental all-in, and he was none too pleased with himself for the misclick.

Well that side bet didn't go according to plan for the @junglemandan ## Come back to the table please Daniel Cate… https://t.co/q4TZCXsTUd

Another situation that came up recently had many on Twitter scratching their heads. TD extraordinaire Matt Savage gets tagged with lots of interesting scenarios that occur at the tables, but this one actually came from him.

Poker is a visual game, hence the importance of the all-in button that dealers place in front of a player who has moved all in. But what happens if that button is misused?

You might often hear that poker is a visual game. As such, it is your responsibility as a player to keep track of the action at your table so you are aware of what bet you are facing, if any, when it's your turn to act.

But in poker, like in everything, people can get distracted and miss some things.

There's also the rule that "verbal is binding." So if a player announces a "call" or "raise," that player is bound to those actions in relation to whatever happened before — even if the player didn't realize another player had gone all in.

Just like the online misclick, these mistakes sometimes work out for the accidental caller, and other times their opponent gets a gift. See a few examples from our live reporting below.

Deep in the 2012 WSOP Main Event, Nick DiVella moved all in from early position with ace-king for 675,000 chips. When action folded to Steven Gee on the button, he tossed in 75,000, apparently just trying to call what he thought was a raise to that amount. The action was ruled a call of the full amount and his king-seven suited was well behind.

But it's poker, so anything can happen. Sure enough, the misclick paid off for Gee. The flop came queen-high but a seven on the turn gave Gee a pair, good enough to win him the pot and send DiVella out in 72nd place.

While slightly less dramatic seeing as it was not the WSOP Main Event, a similar accidental call eliminated a player more recently in the 2018 Unibet Open Malta Main Event. It happened when Eszter Fabian, down to less than 10 big blinds, moved all in with ace-jack and it folded around to Anton Haggblom in the small blind. He didn't realize there was a raise and he tried to raise to three times the big blind.

Having already put in that much, he completed his call to put Fabian at risk with ten-four suited. A ten on the flop and a four on the turn completed the bad beat for Fabian, who was out 13 places from the money.

The blinds folded and the button told Chio, "I think you just got a gift, I have six-high." Sure enough, he turned over the five-six suited and Chio's king-jack suited made two pair for the full double-up. Chio turned that gift into a 101st-place finish for $5,637.

And alas, there was the infamous "check, bet or joke" debacle that took place on Live at the Bike last year. You can read our write-up about that one here, but basically, a player bet $10,000 on the river as a bluff in a live-streamed cash game, got snap-called, and tried to get a re-do.

Let these live misclicks be a lesson to you all... there are no re-do's in poker! Also, don't be afraid to double-check with your dealer about how much it is to go when the action is on you. As they say, better safe than sorry!

Avoid the Accidental Muck By Always Protecting Your Cards