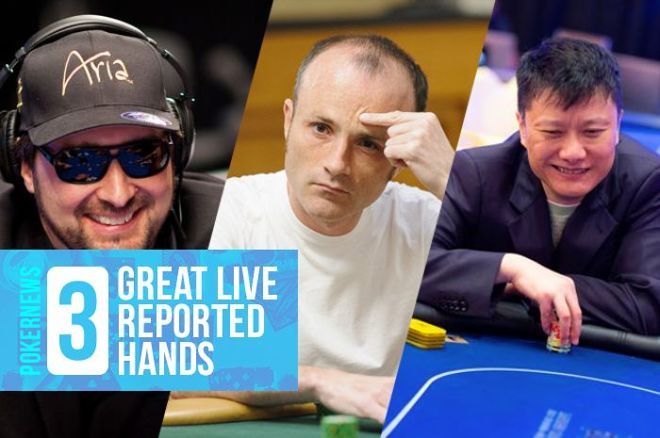 This is Volume 6 of an ongoing series in which PokerNews will look back on some of the most memorable hands recorded in the long history of live reporting on this site. To read more about the concept and which hands make the cut, check out Volume 1.

Hellmuth Blows Up on Devilfish

Phil Hellmuth might be a little better than he used to be at controlling his inner "Poker Brat," but Hellmuth does still have his occasional blow-up that results in controversy. Back in the day, his rants were a little more frequent, and Hellmuth built a reputation on situations like the one that unfolded with the late Dave "Devilfish" Ulliott in Event #46: $5,000 Pot-Limit Omaha Hi-Lo at the 2010 World Series of Poker.

With eight places to go until the money bubble burst, Hellmuth defended his big blind when Devilfish opened for 21,000 at 3,000/6,000 from the cutoff. The flop came

and Hellmuth checked. Ulliott continued for 25,000 and immediately called when Hellmuth jammed for 75,000.

Devilfish was drawing, although not all of his outs were clean as Hellmuth held a king and a club blocker. The turn bricked off with the

but Ulliott hit his flush on the

river. The beat prompted Hellmuth to lose it.

After it was confirmed Hellmuth was covered, he departed in a huff. Devilfish, meanwhile, let the remaining players know what he thought of Hellmuth's play.

Todd Terry cashed for over $2.3 million in live tournaments in his lengthy career as a poker pro. It's safe to say he has played thousands upon thousands of hands, and some of those hands have surely involved big laydowns. However, none were quite so big as the one he made in the $1,500 Six-Max at the 2012 WSOP.

Terry: "I can't believe you'd be bad enough to do that with kings."

On Day 2 and in the money, Terry faced off with Thijmen Stocker in a pot that saw the two staring at a board of

"I can't believe you'd be bad enough to do that with kings," Terry said as he tanked for about two minutes. "Second nut no good here, huh?"

Per the reporting, no hand was shown by Stocker, so Terry and everyone else will have to keep wondering whether the monster fold was correct.

Three-Deuce on a Million-Dollar Bubble

The bubble of a poker tournament ratchets up the tension at the tables, as the next player out will walk away with nothing and everyone else gets at least something to show for their efforts. The pressure is orders of magnitude higher in a $250,000 tournament, and some players will try to take advantage of that by running up a stack, raising and reraising with any two cards without fear.

he must not have cared much about $1 million as the reporter recording the hand related that Qiang chuckled at showdown.

That was the situation at the 2011 Aussie Millions when Wang Qiang decided to get more than a little out of line, much to the benefit of Sam Trickett. Just four players remained, with the third-place finisher scheduled to receive $1 million and his felted predecessor, as Norman Chad might say, squadoosh.

Trickett had been running hot and running over his competitors, so when he opened for 60,000 on the button at 15,000/30,000/4,000, Qiang may have decided it was time to put a stop to Trickett's dominance and show some resistance. Having just recently moved over 20 big blinds with around 650,000, he had plenty of fold equity on a shove and decided to use it by jamming from the big blind.

Unfortunately for him, Trickett held

and quickly called to put him at risk. Qiang could only muster the

, the lowest of the nut low for a preflop all-in situation. He found some hope on the

flop but the turn and river bricked out.

Luckily for Qiang, he must not have cared much about $1 million as the reporter recording the hand related that Qiang chuckled at showdown.

Three Great Live Reported Hands: Mucking When All In, Blind Prize, and a Crucial Double Up