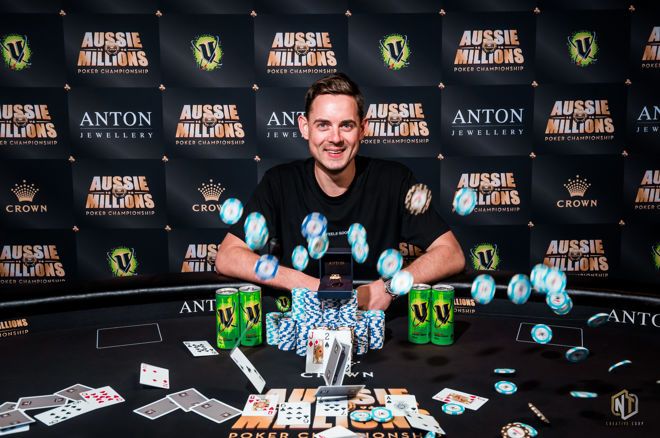 Lewis battled through an extremely long Day 2 to claim the overnight chip lead before continuing his dominance on Day 3 to clinch victory over the record-setting 62-entrant field.

Lewis fell short of tasting victory a few days ago when he finished in second-place in the AU$25,000 Challenge, but now he has claimed retribution. He added the AU$50,000 Challenge title to see him claim his second victory on Australian shores with a 12-month period following his Main Event victory at the 2018 Aussie Millions for AU$1,458,198.

With Lewis' victory in the AU$50,000 Challenge, he now surges to over $6.3 million in lifetime earning and passes Dave Ulliott on England's All-Time Money List to sit in sixth-place overall to sit behind Charlie Carrel.

"I didn’t even intend on playing it; I was so tired after the AU$25,000 Challenge. But it looked like such a good event."

"I’m just very fortunate. I think I played good and ran good. I didn’t even intend on playing it; I was so tired after the AU$25,000 Challenge. But it looked like such a good event; it got so much more players than last year so kinda felt the need to jump in and the guys were willing me in, so I just went for it."

Speaking about the field size, Lewis added, “It’s easy to say that having the recreational players here helps, but the thing is they started it. They were there from the start so, with that, it draws a lot more attention to the event."

When the five players returned, it would be short-stacked Thomas Muehloecker finding two doubles through Bjorn Li, along with taking a pot off Dominik Nitsche, to position himself second overall on the leaderboard. Li then found himself in a hand from out of the big blind against Lewis where on the turn with the board reading

he was all in holding

. Unfortunately for Li, the river landed the

to give Lewis a stronger two pair, and he would be eliminated in fifth place for AU$235,600.

Nitsche would then commit his remaining chips the next hand holding ace-five and be up against Manig Loeser's tens. Nitsche managed to turn some additional win and chop outs but inevitably was eliminated in fourth place for an AU$323,950 payday.

Three-handed play began with Lewis holding more than half the chips in play as Muehloecker and Loeser were within a handful of big blind from each other. Although Muehloecker managed to gain some ground on his two opponents, he ran into Lewis' flopped trips, and then Loeser's turned pair to drop back down to a 19-big blind stack at break.

Once play resumed, Muehloecker shoved from the small blind holding ace-king, and Lewis looked him up with pocket sixes. A six on the turn left Muehloecker drawing dead, and he was eliminated in third-place for a AU$412,300 payday.

Lewis and Loeser discussed a deal, but with Loeser at a near nine-to-one chip disadvantage and nothing to lose once the numbers were presented, the German pro decided to decline the deal and play it out.

Immediately, Loeser secured a double when he was all in preflop holding jacks against Lewis' queens. The dealer ran out a board that gave Loeser a four-card flush and Lewis parted ways with some of his chips. Several hands later, Loeser would have the better of the preflop clash when he took his nines against Lewis' eights. Loeser had closed the gap to be trailing 1.3 million in chips to 1.8 million with blinds at 12,000-24,000.

The two players took another short break before agreeing to a deal that saw Lewis collect AU$818,054 and Loeser collect AU$772,246.

The two players then decided to flip for the title which saw Lewis' jack-deuce pair his jack against Loeser's nine-trey. Lewis was crowned the 2019 Aussie Millions Event #12: AU$50,000 Challenge winner, and received the ANTON Championship Ring.

"I’m very fortunate to get here, so I’m not going to start begrudging my luck now."

Speaking about the heads-up deal, Lewis stated, "I would have just done the deal at the start of heads-up, but it wasn’t really in Manig’s interest to do that, so we didn’t. I then doubled him up – twice! My heads-up game is not the strongest part of my game, for sure. These things happen. I’m very fortunate to get here, so I’m not going to start begrudging my luck now."

For Lewis, his last major tournaments at the Aussie Millions now sees him have a first, second, and another first. Lewis still hasn't entered the 2019 Aussie Millions Main Event either, and will likely be jumping in on Day 1c or Day 2 before late registration closes.

"Very different events. The Main Event is a marathon that you need to be extremely patient in, and the structure is amazing. The structure is great in this as well, but you’re playing against the highest caliber of players; just a lot more risk-taking I guess than being more risk averse in those big Main Events where I might feel like my edge is a little higher."

Congratulations to Toby Lewis, winner of the Event #12: AU$50,000 Challenge and recipient of the ANTON Championship Ring and the AU$818,054 first prize.

Stay tuned to PokerNews.com for continued coverage of the 2019 Aussie Millions with the AU$10,600 Main Event currently playing Day 1c, and the AU$100,000 Challenge coming up in a few days.