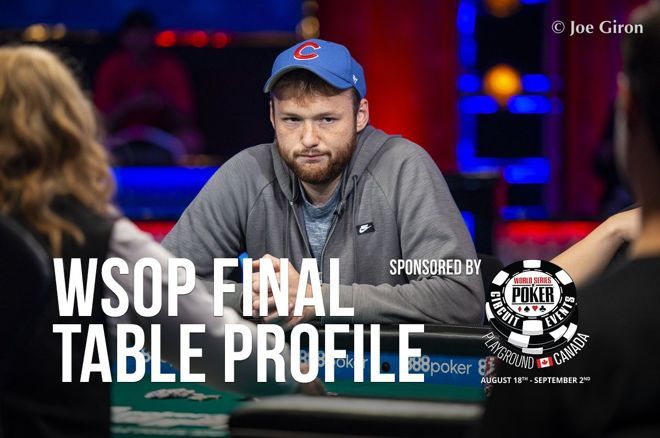 During the last few years, Chicago native Kevin Maahs has strung together an excellent series of tournament cashes across the Midwest. He finished second in the 2018 Heartland Poker Tour for $20,625. He finished second in the 2016 $3,000 High Roller tournament at the Heartland Poker Tour for $12,221. And he won the 2018 WSOP Warm Up in Hammond, Indiana, for $12,000. For Maahs, a Loyola University alum who majored in finance, poker has offered a profitable pastime.

"I play all the time. It's a great hobby of mine."

This year, for the first time, Maahs decided to compete in the WSOP Main Event. Of all the players who made the final table, only Maahs bought into the tournament on Day 2. The merits of late registration was a much-debated topic this summer. If you're playing in the Main Event, for instance, should you play on Day 1 and arrive promptly at 11 a.m.? Should you show up later in the day? Or should you skip Day 1 entirely and register on Day 2 with a shorter stack?

For Maahs, entering on Day 2 was a calculated decision. "It fits more with the style of my game," he explained. "I actually like short-stacked poker more. So I decided to play on Day 2. I've never had a really large stack in this tournament."

How Kevin Maahs Got to the Final Table

"There's been a bunch of key hands," Maahs said, reflecting on the journey through his first Main Event. "I'm just grateful to be here right now. It's awesome. It's a dream come true."

"I'm just grateful to be here right now. It's awesome. It's a dream come true."

, Maahs four-bet to 3,750,000 in the big blind. When Luo announced that he was all in for approximately 8.1 million, Skrbic folded, and Maahs eventually called, seeing the bad news when his opponent turned over a pair of red aces. The

gave him a glimmer of hope. Although he couldn't hit his flush on the

gave him the best hand and the massive pot to bust Luo.

Throughout the tournament, Maahs has quietly gone about his business. He's shown patience and discipline, gradually chipping up and avoiding any rash mistakes. "I got some good hands in some key spots and took advantage of them," he said at the end of Day 7. "And my hands held."

Late in the evening, for example, Maahs was clinging to his tournament life as a short stack in the last place. He patiently waited for a good opportunity to commit his remaining chips—and found it, when he doubled up with two aces against Milos Skrbic's

As he looks ahead to Sunday's final table, Maahs remains optimistic. "I’m actually in a great spot, in fourth," he said. "I haven’t been the chip leader yet, so being in the middle of the pack is comfortable for me."