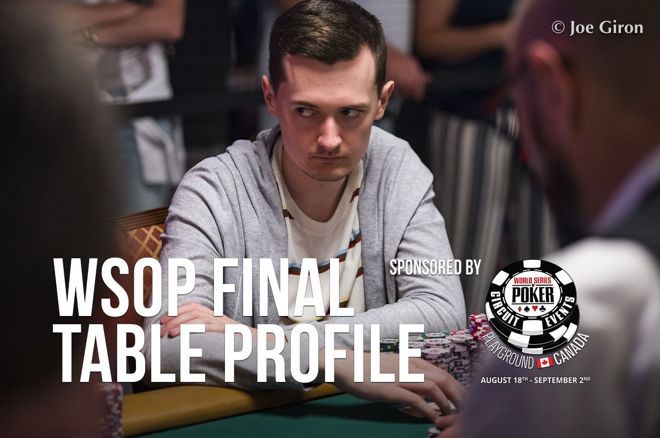 Nick Marchington had a few years of playing poker online under his belt before he turned 21 and got the chance to travel from England to play in the World Series of Poker for the first time. Before he hopped into the $10,000 Main Event, he had some on-the-job training for live poker, learning, and improving as he went until he was good and ready for the big one.

His only live tournament cash came last month in the $800 8-Handed Deepstack, where he finished in nineteenth place for $12,415 — not a big score by any stretch, but a nice boost going into the Main Event. Now, he has a chance to become the youngest Main Event champ ever, as he would be a few months younger than Joe Cada was when he won it in 2009 in the delayed final table setup.

"I wish I could say that I worked hard for the chips, but they just sort of came to me."

Running so deep in his first shot in the Main Event is a dream come true for Marchington, who has been playing poker professionally for just a year.

"It's amazing. It feels like I've been playing the Main Event for about a month," Marchington said during a break on Day 7. "I'm loving it - so exciting."

As an online no-limit hold'em cash player who has only recently been getting into tournaments, Marchington may not have the live poker experience that many of his opponents do, but he didn't let that stop him from heading to Vegas to give it a go.

His learning on the job approach seems to be working well for Marchington, who has been honing his live poker skills for the past six weeks, getting comfortable just in time for the most important tournament of his young poker career. He admitted his first WSOP wasn't going as he had hoped, that is, until the Main Event.

"I think I'm a much better player now than I was at the start - still have a lot to improve on though."

"I think I definitely underestimated how important the live aspect of the game is," Marchington said. "Especially for the first couple weeks I was here, I think I played pretty bad - against the player types and not adjusting enough to the live aspect and maybe having some tells, but I think I've been kind of learning on the job... I think I'm a much better player now than I was at the start - still have a lot to improve on though."

Marchington has had a rather smooth Main Event trajectory, bagging a healthy stack at the end of every day through Day 6, when he bagged the chip lead with 35 players left. After coming into that day with the sixth largest stack with 10,835,000, Marchington had a bit of a rollercoaster of a day that ended quite well for the 21-year-old.

"The first level was pretty rough. I was down to about 4 million at one point. And then in the last three hours of the night, I just went on an incredible run. I wish I could say that I worked hard for the chips, but they just sort of came to me." He continued: "I tried to be aggressive when I could and tried to make some tough laydowns when I thought it was right to, and the other chips just came my way, which is always nice."

How Nick Marchington Got to the Final Table

A significant pot on Day 5 that helped propelled Marchington was a three-bet pot against Adedapo Ajayi where the board came jack-jack-two with two hearts. Holding pocket queens with the queen of hearts, Marchington continuation bet and got called, and called a check-raise when the five of hearts came on the turn.

The river brought a fourth heart with a four and both players checked, Marchington's queen-high flush good enough to drag the pot and keep him moving up the counts.

Late on Day 6, he had several pots propel him after dropping to the lower end of the counts in the early levels. The one that really started his march to the top was a double through Jesse Vilchez that left the latter on a nub that he would lose right after.

Down to 36 big blinds with 7,190,000 in chips, Marchington and Vilchez played for stacks blind versus blind, Marchington with the best of it holding ace-king of diamonds versus king-jack offsuit. The queen-nine-seven two diamond flop gave Vilchez a few more outs as he could win with a non-diamond ten, but the board bricked out, and Marchington soared up the counts.

From there, he continued his destruction, first sending out Laurids Nielson with pocket kings holding up against ace-queen. Marchington then proceeded to dispose of Christopher Wynkoop, winning a flip with ace-queen against Wynkoop's pocket nines for a big one. His last victim of the night was Ian Pelz, whose ace-queen couldn't best Marchington's pocket sevens after a seven hit the flop.

On Day 7, Marchington attempted a large bluff against Hossein Ensan in which he relinquished the chip lead to latter. After defending his big blind with

flop and proceeded to barrel big on the

river. He got looked up by Ensan who had

for flopped aces up, and Ensan ran away with the chip lead with that pot.

“I think the hand was a pretty big punt. I’m not too happy about the hand, but in this tournament, I’ve had the mindset of ‘just go for it’ because generally a lot of people will make big folds. But I didn’t really have the best hand to do it with.”

Playing in his first Main Event across the pond, the young online player has had the full support of his family and friends at home who have been following along since the beginning.

"The reaction has been insane," said Marchington. "When I got in the money and deeper in the money, they were really really happy for me and sending me loads of messages."

"It would mean everything; it would be amazing to win, but I'm just taking every hand as it comes."

With Marchington bagging the Day 6 chip lead, he had his mom apply for the travel Visa so he can book her on a flight over to watch if he makes the final table.

Despite his lack of live experience, Marchington has been making the most of his once-in-a-lifetime opportunity and playing for the win.

"It would mean everything; it would be amazing to win, but I'm just taking every hand as it comes. If I bust in 27th, then so be it but I'm gonna go for it for sure."

Marchington did not bust in 27th, and now he has a chance to make history by becoming the youngest Main Event champ in history as he gets ready to play at the final table. Once they were down to nine, he felt a mix of emotions:

"It feels incredible; I’m just completely at a loss for words. I’m not sure if that’s because I feel just exhausted or I’m just so surprised that I made it this far." Coming in short-stacked, he's not putting pressure on himself to win, but instead just focusing on each decision and taking things as they come.

"If I bust in ninth on the first hand, it'll still be an amazing run."

Look out for Marchington to play his characteristic fearless style and continuing to "go for it."