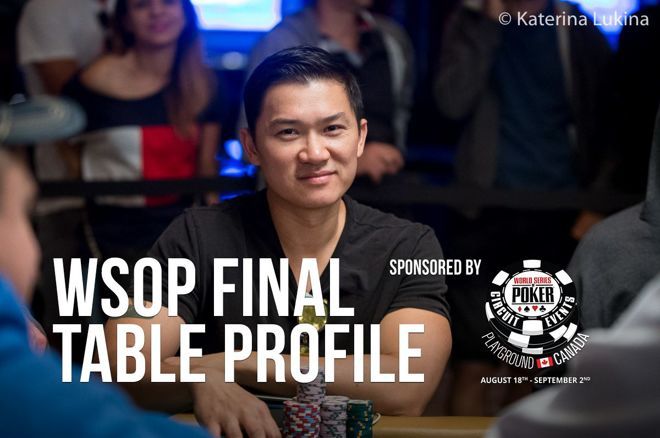 Born December 1, 1983, 35-year-old Zhen Cai is a professional poker player from Lake Worth, Florida. Primarily a pot-limit Omaha cash game player, Cai is following in the footsteps of his good friend Tony Miles, who last year made a deep run in the 2018 WSOP Main Event ultimately finishing in second place.

“Good advice and just reassurance that everything is going to be fine,” Cai said of having his friend of eight years on the rail. “He’s someone else I can talk strategy with, not just basic strategy or poker strategy, but everything he had to go through last year.”

Miles has been on the rail for days sweating the action and plans to be there every step of the way.

“He’s a really good guy. One of my first coaches and mentors in poker,” said Miles. “It feels nice to be on the other side and share some wisdom, strength, and hope. Just be there supporting him the way he was for me last year.”

In asking Cai about how he feels having made the final table on poker's biggest stage, he responded: "Honestly, it's kind of funny. I just never expected to be here. We always talk about it - it's obviously everyone's dream. I dunno, I find it kind of funny now. Somehow I'm here. My best friend (Tony Miles) did it last year. And we're just back here again - it's just ironic."

In addition to Miles, Cai is supported by his wife, Jessica, who flew in late on Day 7, as well as his parents, sister, and other friends. And while he can’t be on the gaming floor, he’s also got the support of his 4-year-old son Chance, with whom he squared off against in a Father’s Day heads-up match.

“Players are definitely getting way tougher right now,” said Cai, who attended the University of Florida where he studied advertising and psychology. “There’s a lot of things you have to think about at this stage. For the most part, I’m just trying to play my best.”

How Zhen Cai Got to the Final Table

Anuj Agarwal was in the big and tanked for two minutes before three-betting all in for approximately 2 million, which Cai snap-called. Seymour had shoved with king-four offsuit, Agarwal came over the top with ace-three suited, and Cai had them both beat with two red queens.

Seymour actually took the lead on a king-high flop, but a queen on the turn locked it up for Cai, who more than doubled to 6.2 million.

Arguably the most significant hand for Zhen came on Day 6 in Level 29 (80,000/160,000/160,000) when Andy Hwang opened for 320,000 from the hijack and Cai shoved the button for 4.075 million. Thomas Parkes called from the big blind, Hwang got out of the way, and Cai found himself way behind with ace-five offsuit against pocket tens. Fortunately for Zhen, he received a reprieve when the flop delivered him two pair.

Cai has put those chips to good use, parlaying them into a final table appearance.

Zhen is a force to be reckoned with at the poker table, especially given his PLO cash game experience. That’s a game full of variance and big swings. Anyone who can deal with those likely has a great deal of patience, resolve, and a proclivity to persevere.

Zhen has shown a willingness to go full steam ahead in likely coinflip situations – such as when he called Preben Stokkan’s three-bet shove with pocket tens, which held against Big Slick – and also knows how to shift gears and trap when necessary, like he did when he dispatched Duey Duong in nineteenth place.

As for the type of player Zhen is, perhaps Miles has the best read.

“He’s a very good live player,” he said. “He's a sound theoretical player. He’s going to be able to exploit players based on live reads, betting patterns, things that are not going to come naturally to everyone.”