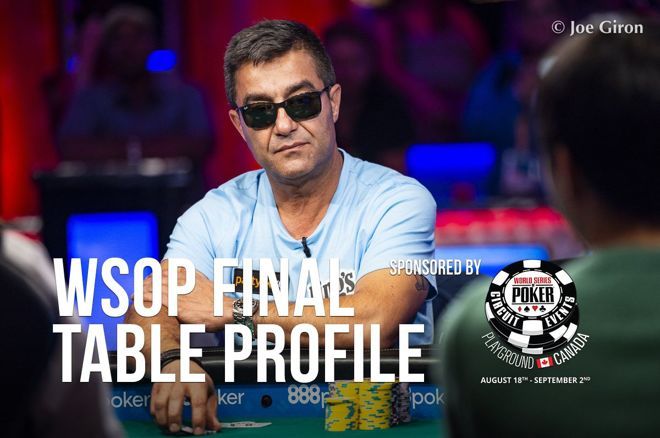 Born in Iran, 55-year-old Hossein Ensan moved to Germany at the age of 25 and has been crushing the poker scene since 2013, although he started playing when he was just 18 years old.

Ensan started with mixed game variants when he was a kid, eventually honing his hold'em skills and going on a tear in Europe. "I love poker," smiled Ensan. He has accumulated over $2.6 million in earnings and earned a World Series of Poker Circuit ring in 2017 in Rozvadov in Event #11: €1,650 No Limit Hold'em Main Event for €184,812.

"Experience is more important than books. Poker is from skill, luck, good run, and strategy. So, this is the point."

Now, Ensan is on poker's biggest stage and looks to add a WSOP bracelet to his decorated resume.

When asked if he is nervous, Ensan told PokerNews: "I am experienced since 2002 in hold'em. Experience is more important than books. Poker is from skill, luck, good run, and strategy. So, this is the point."

Winning the entire Main Event generally comes with the added pressure of being an ambassador, and Ensan is undoubtedly capable of this. The current chip leader mingling with everyone, and enjoying the short breaks is a bit of a rare sight these days.

Ensan also mentioned that winning the Main Event would be validation for the hard work he has put in this last year. "This confirms my game, and I know I can play poker. This is nice!" exclaimed Ensan.

How Hossein Ensan Got to the Final Table

, and Marchington checked. Ensan continued with the aggression and bet 1 million again. Marchington check-raised to 4 million, and Ensan thought about it before tossing in a call. The turn was the

, and Marchington led out for 9.5 million. Ensan decided to call, swelling the pot to almost 30 million in chips.

The dealer completed the board with the

and Marchington decided to fire out a bet of 25 million this time. Ensan wasted no time and snap-called, tabling

for aces up. Marchington mucked, but the live stream revealed he had

"I have history with [Marchington]," explained Ensan. "I played two days with him, so I know how he plays - with pressure and aggressive. He just called and no three-bet. If he three-bet, maybe I fold before the flop. Eights, maybe. But fives, I have a five blocker. I am deep, and I have two pair," explained Ensan.

His gut was right, and the call put him squarely out front of the pack with the final table getting closer.

Based on his intuition in the vital hand above, Ensan's experience is going to be what allows him to rise to the top in this event. Between his deep EPT runs for close to a million dollars, and the number of years he has been on the felt, it's likely Ensan will be calm and focused while playing for $10 million.

"Money is very important for everyone. My plan is to continue my game."

"Money is very important for everyone. My plan is to continue my game. After tomorrow I have to work. I have 10 million, maybe 1 million, maybe 4 million," said Ensan.

Breaking down hands is another skill of Ensan's, as he was able to correctly call against Marchington's three streets of aggression to take a massive lead on Day 7. Reading his opponents and figuring out why they are betting in certain spots will be critical skills that Ensan will put to use as he tries to navigate his way to a victory in the 2019 WSOP Main Event.

Ensan commented on his prediction for his result in this event: "My chance for top three is [good]. Ninth, never. Eighth, I think also. [I'm hoping for] five to first."