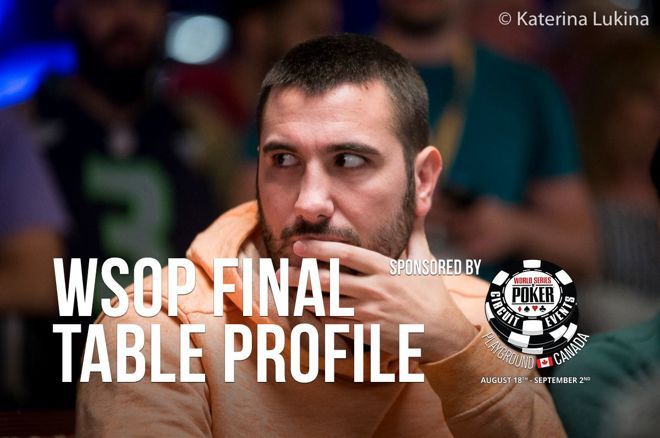 Dario Sammartino is the most decorated, and arguably the most experienced, remaining player in the WSOP Main Event. The native of Naples, Italy has an impressive resume that includes over eight million in live tournament earnings and dozens of cashes on the high-roller circuit. Now, as he prepares to compete at this year's WSOP Main Event final table, his sights are set on the ten-million-dollar first prize and a gold bracelet.

Competing at the highest level can be exhausting. In 2018, as he began to play less poker, there was speculation on whether Sammartino, like Fedor Holz and Doug Polk, was "retiring" from the game.

"I'm not retired," he told PokerNews. "I just don't play poker full-time. Before it was my first priority, but now it's not really important."

During the last year, Sammartino made an effort to spend more time with friends and family. He went skydiving in Australia. He started a new business called “Rent, Sell, Cars” in which he and a friend rent out their flashy Ferraris. Even as he's done an admirable job of branching out and achieving more balance, Sammartino hasn't entirely abandoned his poker goals.

"I still want to win a bracelet," he said.

"I was so sick," he told PokerNews. "It was really bad for three or four days. I had to take a lot of medicine. It was really tough."

Despite a nagging illness, Sammartino got off to a good start on Day 1C, bagging 121,000 chips. He gained momentum over the next few days until a rough Day 5 left him short-stacked and 105th out of 106 remaining players. But the savvy Italian rounder didn't quit. He enjoyed a flurry of double-ups: against Corey Burbick, then through Antonio Esfandiari, and then against Sam Greenwood. By the end of Day 6, he had added nineteen million chips to his stack.

How Dario Sammartino Got to the Final Table

Sammartino leveraged a short stack at the beginning of Day 6 into a healthy stack by the end. A pivotal hand that made his run possible was against an especially tough opponent—2012 Big One for One Drop champ Antonio Esfandiari.

and about three million chips, Sammartino raised to 220,000 and Esfandiari three-bet in the hijack to 530,000. Sammartino called. After seeing the

flop, Sammartino check-called a bet of 435,000 and binked a card that he was looking for—the

Holding the nut straight, Sammartino check-called all in for 1,320,000 and saw that he had Esfandiari's

drawing to a chop. Suddenly Sammartino had over six million in chips and the necessary momentum to propel him to the brink of the final table. The hand also showed that Sammartino is capable of taking unpredictable lines with a wide range of hands.

"I change my play a lot," he said. "I change based on the table, the stack, the player. A lot of things help me decide how to play. I don't have one basic strategy, and that is good. I change all the time and play my opponents differently. I hope it makes it hard for people to know how to play against me."

In what turned into a controversial hand late on Day 7, Sammartino opened with pocket tens and Marchington moved all in. After asking for a count, Sammartino put in the call for what the dealer told him was just over twenty big blinds. As it turned out, the shove was actually for closer to thirty big blinds. The floor was called, but it was ruled that the call would stand.

Marchington doubled up in the hand when his queens held versus Sammartino's pocket tens and the amicable Italian was visibly upset. A couple of eliminations later though, he seemed to have moved on telling PokerNews, "That hand was so sick. It took a lot of time. It was so sick. But I made it. I cannot give up right now."

Given his stellar track record and a healthy stack, Sammartino is in an excellent position to go the distance. The illness that plagued him at the beginning of the tournament is already a distant memory.

"This is completely different from other tournaments," he said of the Main Event. "It's the best tournament you can play."

Coming in with 33 big blinds, the seasoned pro knows what to do, and he'll look to add the most coveted title in poker to his long list of poker accolades in the days to come.