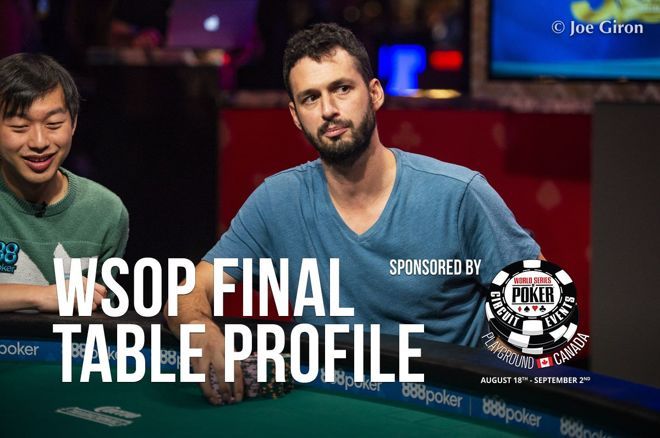 Going deep in the World Series of Poker Main Event with the massive fields the event draws in the modern era is a highly unlikely feat, no matter how good you are at the game. But going deep twice is even more against the odds.

Alex Livingston lived a poker dream going deep in the 2013 WSOP Main Event, eventually finishing in thirteenth place for a career-high score of $451,398. Now, he's re-living that dream. The Canadian poker pro has already bested his incredible run from six years ago and guaranteed to cash for much more money.

"I'm obviously super lucky to be here again in this situation, but the experience has been a lot easier because I've been here before. That's an advantage I have over the other players."

"I think that having been in this situation before, I'm just playing a poker tournament."

Having been here before, Livingston has dealt much better this time around with the pressure that naturally comes with a deep run under the lights and cameras with large pay jumps on the line.

"The first time I went through it, I lost a lot of weight. I didn't eat well, and I didn't sleep well. I'm still not eating great, but I'm sleeping better and just feeling better."

With all the hype and messages pouring in, Livingston is making sure to stay dialed in so he can play his best.

Livingston isn't sweating the result, but rather just playing his game, controlling what he can control. "I'm just taking it a hand at a time, a decision at a time and what happens, happens - can't control the rest."

How Alex Livingston Got to the Final Table

As Livingston well knows, "You gotta get lucky to go deep in this thing," and he got found lady luck to be on his side in some critical moments on Day 7.

"I got super lucky twice today. I got all in with fives against jacks and hit a set, and I got a huge triple up with ace-ten of clubs against ace-king and tens... So those were the two big hands for sure."

"You gotta get lucky to go deep in this thing."

Livingston got short-stacked on several occasions during the day, but always found a way to stay afloat, winning each time his tournament life was at risk. He doubled up several times on the day, more than once through Milos Skrbic.

His final critical hand was the final one of the night, when he eliminated the tenth-place finisher Robert Heidorn, his pocket eights flopping a set against Heidorn's king-queen suited and holding up to set up the official 2019 WSOP final table.

Livingston still remembers watching the Main Event on ESPN as a kid and particularly admiring Phil Ivey who was "the guy" at that time. Now, he's the one in the spotlight.

With his 2013 run already well surpassed, Livingston is looking to use his experience to close it out this time and will have plenty of ammo to maneuver, coming in with 38 big blinds. Having been under the late Main Event pressure before, and with ample poker experience under his belt, Livingston will be a force to be reckoned with at the final table.

"I think that for a lot of these players, they're letting the amount of money and the pressure kind of affect their play and I've sure I've done that to some extent. But I think that having been in this situation before, I'm just playing a poker tournament."