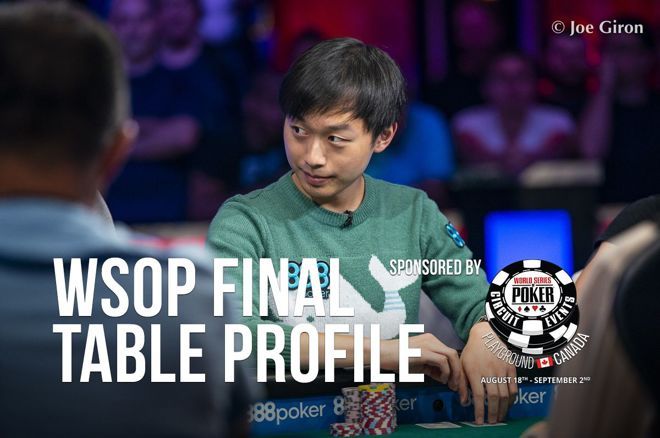 As a recreational player with only $2,467 in lifetime tournament cashes, Timothy Su might seem like a long shot to win this year's WSOP Main Event. But the Boston-based software engineer has impressively wielded a big stack from start to finish, and, heading into the final table, he shows no signs of slowing down.

"Fundamentally, you can treat everything with a mindset aimed at being proficient. Practice, problem-solving, and thinking things through. Taking your time."

"I'm proud," he said of nimbly navigating the 8,569-player starting field. "When the big blind is the starting stack... to think that's what we all started with is unreal."

Originally from Allentown, Pennsylvania, Su is a self-professed "nerd" whose favorite pastimes—playing the oboe, reading, and listening to Tchaikovsky—might seem to be at odds with poker-playing. But nothing could be further from the truth for Su, who sees plenty of parallels between music, poker, and software engineering. "Fundamentally, you can treat everything with a mindset aimed at being proficient," he told PokerNews. "Practice, problem-solving, and thinking things through. Taking your time."

Su played poker casually in dorm room games at Northeastern University. After graduating, he was torn between a career as a musician and as a software engineer. Eventually, he settled on the latter path. But he kept playing music and—of course—poker as well.

Su got off to a blazing start in his first-ever Main Event. He finished Day 1a with 297,000 chips and was the Day 2ab chip leader. He kept accumulating chips and eliminating talented opponents. On Day 3, he busted phenom Igor Kurganov in a set-over-set cooler. On Day 5, he busted three-time bracelet winner Brian Yoon with aces over Yoon's kings. And on Day 6, he tangled with high-stakes crusher Sam Greenwood in a hand that the poker world is still buzzing about.

from the cutoff, Greenwood reraised with pocket aces from the big blind, and Su called. The two big stacks saw a flop of

With over five million already in the pot, Greenwood bet 1.8 million, Su called with his open-ended straight draw, and the

turn paired the board. Greenwood bet again, this time for 3.5 million, and Su shoved all-in, putting Greenwood to a decision for his tournament life. Shaking his head, Greenwood called off his remaining chips and saw that his aces were in a dominating position to win. The river, however, was the

“There wasn’t much thought that honestly went into it,” Su said afterward. “It was near a pay jump, and I thought he could have a lot of hands that he would probably bet-fold. When he flipped it over, I think he had one of the best hands to call it off with. So, kudos to him. And then the cards just determined where the money went.”

How Timothy Su Got to the Final Table

Throughout the tournament, Su has adopted a jovial, chatty demeanor at the tables. As the hand against Sam Greenwood demonstrates, he's also willing to take an aggressive, creative approach when the situation calls for it.

I'm coming in second-shortest in chips, but we still made it. That's what counts."

Where does this mindset come from? Maybe it links to his background in music and improvisation. Or maybe, as an exuberant member of his rail called out, "He's a killer! Bracelet or bust!"

Day 7 proved to be a swingy one for Su, whose stack crested at over 100 million chips and finished at just over 20 million. "It's super-surreal now," he said at the end of the day, "but we did it! Final table! I'm coming in second-shortest in chips, but we still made it. That's what counts."