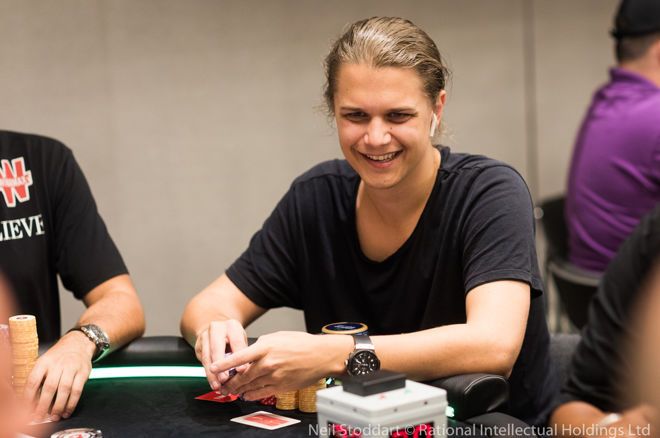 On Sunday, Sweden's Niklas "Lena900" Astedt kept riding the wave of success in the World Championship of Online Poker (WCOOP) at PokerStars with a second victory in two days. The Swede captured his third overall WCOOP title by closing out WCOOP-44-H: $2,100 NLHE where he turned a sizable chip lead at the start of the day into the win at the end of the night.

Astedt is the second player this series to go back-to-back, following up on Adrian "Amadi_017" Mateos' earlier accomplishment and broke the $21M in online tournament cashes as tracked by PocketFives where he's on top of the all-time money leader board.

Several other players scored victories including Brazil's Rafael "pycadasgalax" Furlanetto winning his second title as well. Other big events kicked off on Sunday and are still in play.

Read below for a full overview of what happened on Day 15 of the WCOOP.

Claiming a narrow Day 1 chip lead was Jakob "Succeeed" Miegel from Germany who resides in Austria with a stack of 4,456,378. Miegel was near the top of the counts for most of the later stages of the day but cemented the lead when he took out "girafganger7" and Ognyan "cocojamb0" Dimov out in one hand, before Pauli "Fiilismies" Ayras fell to him too, and then took a chunk out of the stack of "kimokh".

When the players return on Monday, September 4, at 7:05 p.m. CEST, they will finish the last 9 minutes of Level 21 which features a small blind of 25,000, a big blind of 50,000, and a running ante of 6,000. Play will continue until a new WCOOP champion can be crowned and the PokerStars Twitch Stream will be live with James Hartigan and Joe Stapleton. The coverage will be on a security delay as the hole cards will be shown.

Jump right into the action of WCOOP-48-H

A big field emerged in WCOOP-48-M: $530 NLHE [8-Max, Progressive KO, Sunday Slam] as the event drew a total of 3,856 entries, which created a prize pool of $1,928,000 and easily surpassed the $1.5 million guarantee in the latest PokerStars World Championship of Online Poker 2020 mid-stakes tournament.

The money bubble burst in the last hour of play and more than 200 players took home a portion of the cash prize pool along with any bounties they collected so far. Once the post-bubble madness concluded after some 50 minutes, the remaining field was whittled down to just 351 hopefuls who have all secured two pay jumps already.

The action recommences the following day at 1.05 p.m. ET and the penultimate day is slated to play down to the final 16.

Follow along with live coverage of WCOOP-48-M right here

On Sunday, a total of nine new WCOOP champions were crowned. There was more to celebrate for Brazil after Fulanetto's victory, as three more Brazilians collected titles to reaffirm the country's status as top dog in the online poker world.

As expected, it was a stacked affair at the top with the likes of Pieter "XMorphineX" Aerts, Manig "swordfish007" Loeser, "Aleks Better" and Preben "prebz" Stokkan all claiming a seat among the final nine.

However, most eyes at the final table went out to Frank "Knueppel" Stockhaus, who gained notoriety as being part of the Twitch poker viewing record set by his friend and streamer Jens “TheRealKnossi” Knossalla.

During the Stadium Series, Knossalla was hyping up his friend on his Twitch channel and he's been trying to replicate that magic in the past few days. While the record wasn't shattered this time, many knueppels (picture a baseball bat) were posted in the chat to show support for the illustrious Germans. Stockhaus ultimately finished in eight place for $12,933.

As is tradition, many big events kicked off on Sunday night that will play down to a winner on Monday or Tuesday night. In WCOOP-47-H: $2,100 NLHE Freezeout, a Sunday Warm-Up Special, Belgium's "girafganger7" is chip leader with 18 remaining for a top prize of nearly $100K.

Nine new events are kicking off on Monday with a 6-Max, Progressive KO starting at 1:05 p.m. ET, a PLO8 event one hour later, following by a special Win the Button event at 3:05 p.m. ET.